Smell You Later, Summertime: 16 Best Things Going Down in NYC This September

We’ve said so long to most of the summer.

September’s that pleasant month where we can expect things to cool off just a teensy bit, you know, in anticipation for a decent fall.

We’re all hoping for a decent fall because this winter’s gonna suuuuuuuuuuuuuuuuck.

So we’ll fight the good fight with some fab autumn events, enjoying the dog days of summer and raising a glass to the cooler weather ahead.

Yeah, we always seem to talk a big game when it comes to waiting for Summertime in NYC. Then it gets here, everything smells disgusting, our faces melt when walking just a few feet from the door, and it's, generally speaking, mostly unpleasant when stuck in the city limits.

So, we're pourin' one out for summer, and we're saying goodbye in the most epic way possible: one last booze cruise on The Hudson.

Yep. We're at it again with our Goodbye Summer Sunset Sail.

Sure, that's a bit of a ways off, but you should definitely consider getting tickets ASAP as they will most definitely be sold out. Get 'em here.

As for the rest of the month? Here are 15 other events happening in September that we’re absolutely falling for (GET IT?).

This dope music festival goes from September 2nd to the 4th, and sorry for not mentioning this earlier, but you should have grabbed your tix before reading this. They go pretty quickly.

Randall’s Island gets full up for this Labor Day event, and this year is no exception. Bassnectar’s opening the festival on the Main Stage, and with five different stages every night that gives you tons of talented newcomers and seasoned veterans from whom to choose.

We're not bookies, but odds are the tickets will be going, going, gone pretty soon. Are you Han Solo? Should we never tell you the odds? Relax, you can grab your tix here.

Puff Daddy and some super special guest stars put together one of these for Biggie’s 44th back in May.

If you missed that celebration, no sweat. Madison Square Garden’s hosting The Bad Boy Family Reunion on September 4th. Faith Evans, Lil Kim, and Mase are all part of this concert, and Puff Daddy hasn’t collaborated with his Family in over a decade.

So grab your tickets here and we’ll see you there!

Have you heard about this exhibition? In a way, we all have. Don’t read into that.

Patrick Eugene’s debut solo exhibition, “Deconstruction,” is dealing with something we’ve all got on our minds, gentrification. Specifically, gentrification in Brooklyn.

Eugene’s artwork challenges our conventional tldr approach to information, and invites viewers to process his large and emotionally charged canvases deeply as well as for extended periods of time.

You can RSVP for the opening reception here. It’s happening at 6:30 on September 8th. Unable to make opening night? It’s cool. Patrick’s work will be on display at 210 24th Street in Brooklyn until the 23rd. We've also gotten the opportunity to speak with him about his work, so be on the look out for that!

Release your inner child ( and your best ‘90s clothes) at this festival on September 10th.

There’s all sorts of good food and retro gaming (Legends of the Hidden Temple, anyone?) going down, but that’s not all.

DJ Jazzy Jeff and Sister Hazel will perform, among some others. Oh, and Pauly Shore is hosting. Kind of a big deal, yeah? Get your tickets right here.

The fifth annual Bushwick drag festival―guess where it’s going down?

If you missed the news, Bushwick’s Queens have sashayed away to Maspeth, in Queens.

Queens in Queens, how about that? They’ll be at the Knockdown Center (located at 52-19 Flushing Avenue) strutting their stuff.

What are you waiting for? Snatch your tickets here.

The Bronx has got some tasty things in the works, and this year’s Ferragosto celebration is no exception. NYC’s Ferragosto pays homage to its Italian roots as a harvest celebration with music, food, friends, and family.

They’ll be partying on Arthur Avenue, between Crescent and 187th Street, on September 11th from noon to 6 p.m., so stop by “The Real Little Italy,” and bring your appetite.

Every weekend until October 9th, Manhattan By Sail will team up with a different brewery to give you a craft beer tasting unlike any other. September 11th they’re featuring the brilliance of The Bronx Brewery, and we’re in love.

You’ll also get a dope beer related swag bag. Not sure what that all entails just yet, but we’re super pumped!

You have until September 1st to win this incredible giveaway. Check it right here. Or you can just go ahead and grab your tickets right here. 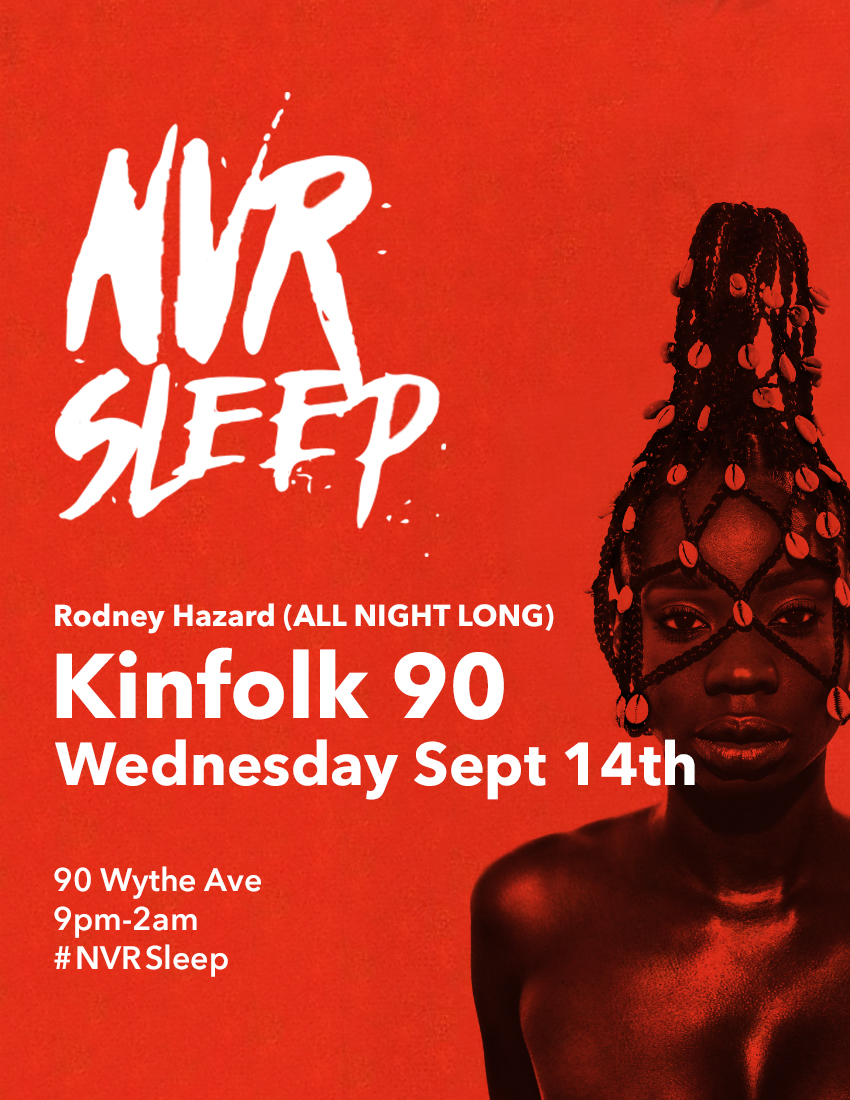 Hip-hop producer and spoiled Media Creative Director Rodney Hazard will turn things up a notch or two at Kinfolk 90 in Williamsburg. NVR Sleep means more than a good time, so expect this Afrobeats celebration to light some fires on September 14th.

Sip (or knock back) a beverage or three, get your nom on, and give yourself a high-five for locating a Wednesday night party without scraping together cash for a cover charge.

We believe in you. To get on the list for this sweet par-tay, RSVP here.

The super-secret picnic (also one of the best excuses to wear white after Labor Day) safeguards against picnic-crashers by announcing its location to the general public only minutes before the event.

Obviously events like these are like Hamilton. Tickets go super-fast, so registering now means just hoping you’ll get bumped from the waitlist, receive your super-secret code, and most importantly, bring all your picnic equipment.

The Vendy Awards delivers a culinary throwdown like no other, the best of the best street foods fighting for titles and bragging rights.

Your ticket gets you noms from over 25 food vendors, unlimited beer from Brooklyn Brewery, and wine from the Santa Cristina wine bar.

So if you love eating and good times, gather among thousands of others on Governors Island on September 17th from 12:30 p.m. to 5 p.m. to dine, drink, and vote. Winners are decided by ticket holders, a panel of celebrity judges, chefs, television personalities and city officials.

One thing is for sure, and that's that you won't leave sad or hungry. Get your tickets here.

Speaking of picnics that fill us up, OktoberFest NYC’s happening this month. If you haven’t experienced live music and lederhosen with your legit German brews, now’s the time.

If you miss it this month, shame on you. But we understand. It’s called Oktoberfest for a reason, ja?

That’s why OktoberFest NYC will give you one last chance to drink from beer steins and chow down on some delicious pretzels while you hear live music on October 1st through the 2nd.

Bring two empty hands for your liter and pretzel (or bratwurst) and remember to get your tickets here.

Hors d’oeuvres. Loads of Bud Light. Dancing. Views. Yachts. Booze. Cruise. Damn straight, skippy, we’re doin’ it again! The question is, Are you in? Then get your tickets right here.

Remember those good old days, of temperance and teetotaling and the 18th amendment?

Fortunately, neither do we. But the folks over at The Museum of Interesting Things have assembled their secret speakeasy at a Soho loft to party like Prohibition’s still on.

Which means if you want your booze, you’ll have to follow the website’s instructions and ask one of the “nurses” or “doctors” to prescribe you something for that “headache, rheumatism, bedwetting, or hysteria!”

They’ll also be sharing treasures from their collections, including screenings of 16 millimeter films, and you might get to pick which ones they’ll roll.

Pick up your advance tickets here, or grab them at the door, located on the third floor of The Loft at Prince Street (177 Prince Street). Just remember the password is “swordfish."

Bacon! You either love it or are a vegetarian. Vegetarians, you keep your veggie bacon handy when you accompany your bacon-loving friends to The Great Big Bacon Picnic September 24th and 25th.

The deliciousness has been divided into three separate sessions, each lasting two-and-a-half hours. A general admission ticket gets you ALL THE BACON NOMS YOU CAN EAT. Obviously, there’s a Bacon Bar, as well as actual beverages to imbibe with said bacon.

Are you drooling? So are we. Even better, ten percent of the net proceeds are going to charities like City Harvest, and the Brooklyn-based High & Mighty Brass Band will provide music.

This event will be so good, you’ll be bacon for more. (GET IT?)

Prepare to feast after you’ve snagged your tickets here.

This year’s festival has numerous concerts, a showcase, DJs, and the Brooklyn Ballet.

All this good stuff is happening on Atlantic Avenue between 4th Avenue and Hicks Street in Brooklyn, from noon to six on September 25th. Check out the complete list of events here.

The first comedy festival in Harlem will celebrate comedians of color September 24th through the 30th.

For a week’s worth of laughs, look no further than here. They’re breaking out comedic competitions, sketch comedy, several film series, and ending the week with some improv.

Snag your tickets for the individual events here.