Ms. Shine Goes To Washington: Being A Liberal Woman at Donald Trump's Inauguration

I traveled with ANSWER Coalition, who had secured a permit at the United States Navy Memorial. ANSWER is firmly anti-Trump but does not align with the Democratic Party either. This protest was planned regardless of who was elected President. As someone who is still firmly #withher, I was nervous to be traveling with ANSWER, but I was there to learn and to listen.

I wanted to be there to protest, but also to see the people who had helped elect this man.

What would it look like, what would it feel when when all of us were crammed onto Pennsylvania Avenue together, listening as Donald Trump was sworn in as the 45th President of the United States?

Our bus parked outside of the city, at a metro station in Virginia. We bought all-day metro passes that had been designed specially for the inauguration.

The American flag, the White House, the words “Inaugural Celebration” printed on the cards” – I already felt queasy. This was really happening.

Once on board the train, I saw my first family of Trump supporters mixed in with the protesters. Two young girls in fuzzy elephant hats, their father wearing a red “Make America Great Again” hat.

They looked at us and we looked at them. No one said anything. I wondered what these girls thought of Donald Trump? Did he remind them of their father? Had he explained what pussy meant to them recently? 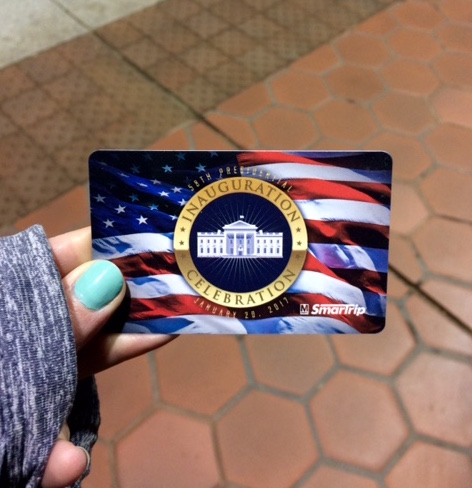 We arrived in D.C. and walked towards the Capitol. We would have to pass through a checkpoint to get onto the National Mall, where the Inaugural Parade would pass down Pennsylvania Avenue. Several thousand of us stood on line for about two hours to pass through security.

At one point, an animal rights group formed a human chain and wouldn’t allow anyone (even other Trump protesters) to pass through security. At another point, someone with LLAMAS showed up. When I was finally getting screened in the security line, I looked up and realized I was next to Robert Smigel and Triumph the Insult Comic Dog, from Conan!! I played it cool because of all the heavily armed military folks patting me down.

Llamas and Insult Comic Dogs were the fun part of waiting outside in January for two hours. The not so fun part was the tension between Trump supporters and Trump protesters standing shoulder to shoulder in the cold, early morning.

At any given moment, chants of “F*ck Trump!” would break out. Protesters began to wave signs and banners in the faces of Trump supporters. Military personnel and police officers watched us, ready. I ate granola bars, also ready.

A young, male protester got into a verbal spat with a middle-aged woman. He kept raising his voice, saying how he “f*cking hated Trump people." She wore a white coat and a lot of makeup; she never raised her voice to him. Why would she? She was here to celebrate.

Once inside the checkpoint, I made my way to Navy Memorial, where a protest rally was already taking place. There were speeches throughout the day from leaders of ANSWER Coalition, Black Lives Matter, and groups supporting immigrants rights.

The most moving speeches came from the mothers of young black men and women who had been fatally shot by police officers.

More and more protesters began to file in, although as it became closer to noon, reports came that the Secret Service was only allowing Trump supporters through. Wait times to get through security went from two hours to five.

Later in the day, I would receive panicked texts and phone calls asking if I was safe, as footage had been circulating of the anarchist group “Black Bloc” smashing windows and starting fires. Police used stun-grenades, tear gas, and pepper spray on crowds to control the riots, and 92 arrests were made. ANSWER Coalition played no part in these riots and I was thankfully nowhere near these events, as I was under strict instruction from my editor (Editor's Note: GREAT JOB, KATE!) to NOT get arrested this weekend. 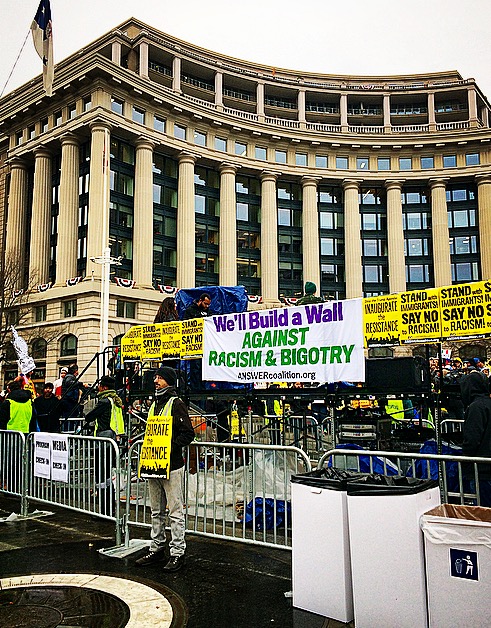 I decided to break away from the protesters and venture into Trump country. I didn’t bring a sign and I was dressed in black and grey, so I felt like I would come off as “neutral,” or maybe I would blend into the crowd. This worked only sort of well. As I made my way towards up Pennsylvania Avenue, towards the Capitol Building, I approached some young blonde men who were wearing berets.

Not cute berets that one buys after you’ve just seen a French film, but stiff, scary berets that are worn for purposes of exclusivity. You have to be a member of a club to wear these berets. I am not in the club. I don’t want to be in the club. The club has my face on a dartboard.

These guys stood in my way as I was walking on the sidewalk and as I tried to pass by them, one of them actually said “No,” to me and pointed to where I should walk instead. I looked at him, because I wasn’t sure I understood. Was there something wrong with where I was planning on walking? Was there dog shit on the sidewalk? No… no dog shit. Why was I being told I couldn’t walk where he was walking? Perhaps grey and black wasn’t as clever a disguise as I had thought.

As the hour neared for Trump to be sworn in, I picked a spot to stand where I would watch it all go down. I decided on The National Archives Building. I stood next to a bunch of empty bleachers right in front of the building. And believe me, they were empty AF.

A motorcade consisting of police cruisers, limousines, and armored cars drove up Pennsylvania Ave and towards the Capitol. The assumption being that Donald Trump was in one of these cars, supporters cheered, protesters booed, and I ate a beef empanada.

It was finally time for Donald Trump to be sworn in. None of it felt real.

As he gave his inaugural address, I listened to his voice booming out over the speakers through the National Mall, and I kept thinking that this is what it must be like: this is what it is like to live under an oppressor.

His voice ringing down the city streets. His name on the buildings. His merchandise on the backs of his citizens. He is buying our country. I just don’t know why, or what to do about it. But I had to see it. I had to see the people that wanted this and try to understand why they feel this way, because this is really happening.

From what I could gather, the people that support him seemed to be there for their families. They seemed to want their lives to be better. But they have placed their trust in the wrong man. Donald Trump is not going to make life better for them. 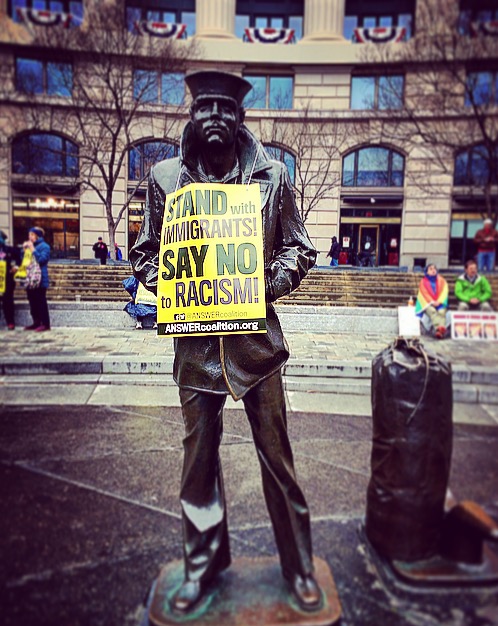 Underneath every uniform, beneath every hat, behind every sign at a rally, is a living, breathing person. It’s easy to forget that there’s actually a person with a life just like you behind some dumb f*cking tweet. We have stopped treating one another like human beings because it’s easier not to engage.

Going to Donald Trump’s inauguration forced me to engage with people that I thought I had nothing in common with. But I have tons in common with many of these people. We all want what’s best for those we love. We all want access to healthcare. And we are all scared sh*tless of the other side.

I think the next four (PLEASE) years are going to mean a lot of uncomfortable conversations. Not only with people that are different from us, but also with ourselves. Why do we feel this way about this group of people? Where does that fear come from? What will it take to change that assumption?

Change doesn’t happen overnight, but we are the ones who have to start it now – little by little, brick by brick. For every time Trump talks about putting up a wall, start tearing down your own.