Did You Know Harper Lee Had a ‘Secret’ Upper East Side Apartment for Less than $1000/Month?

We're guessing you heard about how Harper Lee, at the age of 89, passed away on Friday in Monroeville, Alabama.

We're also guessing you've heard about, and probably even read, the 1960 Pulitzer Prize-winning book To Kill A Mockingbird, which turned Lee into an instant celebrity.

"I never expected any sort of success with Mockingbird," Harper said to a radio interviewer in 1964. "I was hoping for a quick and merciful death at the hands of the reviewers, but at the same time I sort of hoped someone would like it well enough to give me encouragement."

Did you know, also, that Harper Lee had an Upper East Side apartment? Oh, what's that? You didn't see her strolling on 82nd Street?

Yeah, The New York Post reported that Lee had signed on for two more years for her one bedroom at 433 East 82nd Street, even though she hadn't lived there since suffering a stroke in 2007.

"She's up to date on her rent," said property manager Steven Austern.

The craziest part about this all? Well, this part will floor you, so get ready. Lee's rent cost less than $1,000 a month.

For anyone who's been paying attention to the sky-scraper high prices of rent in New York City, you'll know the idea of a two-bedroom on the Upper East Side costing less than a thousand a month is mind blowing.

Austern did technically have a legal right to terminate Lee's lease and collect a higher rent from a new tenant, but he said he couldn't.

"She was a personal friend of mine," Austern said.

Lee's neighbors said that every Sunday morning, she'd finish The New York Times Magazine crossword puzzle by 9 a.m. and leave it on a table in the building's lobby. 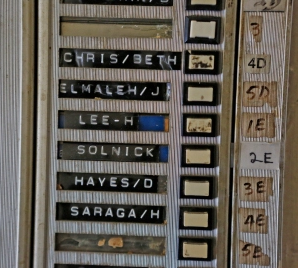 There was a conspicuous clue outside the building to Lee's tenancy: the buzzer read "Lee - H," but some occupants had no idea who that was.

"Her radiator leaked earlier this year and made a hole in our ceiling. That's how we found out she lived there," said Caroline Holden, who lives in a basement apartment.

Lee was also a regular at Ottomanelli Bros., a butcher shop on York Avenue. She would visit twice a day; first at 7:30 a.m. for a cup of black coffee and a raisin scone, and then in the late afternoon for a chicken, a lamb chop, or the first cut of Delmonico Steak.

Lee, you're a true New Yorker, both because you actually lived here, and because you wrote the most stunning, shinning plea for United States' equality this country has ever seen (we're not going to touch Go Set a Watchman though...)

You will certainly be missed.