Plenty of New Yorkers still haven't received the compensation they need to rebuild their homes after Sandy, the Hudson River tunnel is in desperate need of repair, and 30 subway stations will shut down in the coming months to repair Sandy's damage more than three years later.

The good news: the city is taking steps to prevent a future hurricane nightmare. They might build a beautiful, storm resistant park along the East River, from Battery Park to 23rd Street.

The project is called the East Side Coastal Resiliency Project, and its proposal is moving forward quickly.

And why wouldn't it? It's a gorgeous park that will add to the flavor of the Lower East Side, plus protect the city from storms. Sounds like a win-win to us.

If you remember, Lower Manhattan lost electricity during Sandy. That was because a wave plowed right into the Con Ed plant on 14th Street.

The park would prevent such a power outage from happening again, by sloping upward to create a huge barrier, which would, according to latest renderings, have crisscrossing paths for walking and biking.

According to TimeOut, the park is being designed by the Bjarke Ingels Group, and funded with $335 million they won in a U.S. Department of Housing Rebuild by Design Competition.

The Mayor announced an additional $100 million allocation to complete the part of the park between Montgomery Street and Battery Park last summer, and the city is seeking another $500 million from the Federal Government.

We hope the government gives the Bjarke Ingels Group the money, because we're definitely trying to bike the slopes beside the East River. The renderings are super pretty. Also, being safe from hurricanes is cool too. 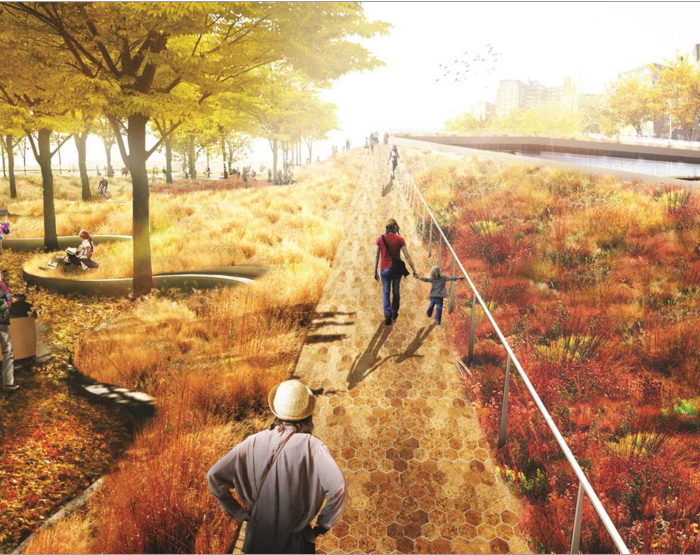 The new park, dubbed "The Dryline," is only a chip off the iceberg of the East Side Coastal Resiliency Project.

When all's said and done, there will be more coastal protection, building upgrades, and critical infrastructure and services, plus community improvements on the East Side thanks to ESCR.

Still, we're fighting the good fight. We've got some of the smartest, architecturally and environmentally savvy designers on our side. We're really optimistic that the next time a big time hurricane hits the city, NYC will be less decimated than it was by Sandy.

Check out This Incredible Scratch-Off Map That Shows You NYC in 1924 & Today.