Good Idea or Nah? What If There Was A Bridge Connecting New Jersey and Queens?!

Will this bridge finally put an end to New Jersey and New York being arch enemies?

Have you ever noticed how many bridges are in New York City? You've got big, small and all every size in between. Some incredibly iconic while some are just tucked away from all the hustle and bustle. Some have pretty crazy secrets like the Brooklyn Bridge's bomb shelter.

But, what if there was a bridge that would become the mother of all bridges?

Scott R. Spencer wants to create two suspension bridges that would connect New Jersey with Queens and would be for any mode of ground transportation except for cars.

The bridges would be along 38th and 39th Street and both would be a triple-decker bridge.

The bottom level would just be for trains, the middle would also be used by trains but reserved for the rather futuristic magnetic ones and the upper deck would be used by pedestrians and cyclists.

You're gonna have to suspend your disbelief when thinking about this super-bridge because it is a proposal and a costly one at that.

Spencer estimates that the whole thing would cost about $20 billion.

Revenue would be from tolls.

Buses, limos and taxis would pay, as well as NJ transit and Amtrak. Trucks, probably the group that would benefit the most from the this bridge, wouldn't be allowed on because of the noise and fumes they bring. 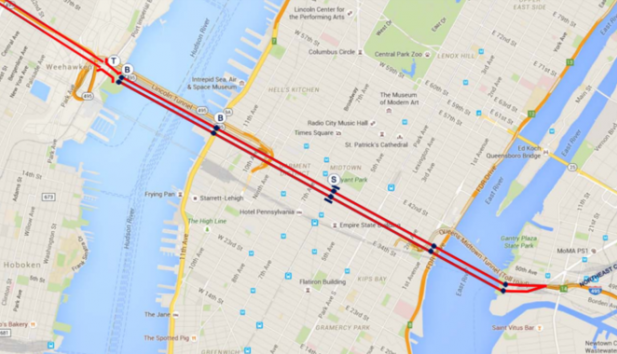 So, is this a way to mend the relationship of New Jersey and New York while alleviating some traffic woes?

Well, if there was one way to get over a problem it's to build a bridge.

Check out Get Ready to Fall in Love with 'W New York' All Over Again.