9 Terrible Men You'll Find on Dating Apps in NYC... And 1 That Will Almost Make It All Worth It

So you’re in your mid-twenties and you thought you had all the time in the world to get your sh*t together... until your quarter life crisis hits you like the bus that hit Regina George.

Suddenly, your “golden years” or what is supposed to be the best time in your life seems like the most daunting experience – and the core of this existential crisis is dating.

You went to a prestigious university, you’re from a great family, you frequent at the country club, you’ve landed a decent job in NYC which means it's better than 99% of jobs in America and (you have to give yourself some credit here)— You think you’re like, really pretty.

And yet, as per usual, your quarter-life crisis is 10X more difficult because you live in the most competitive, intelligent, and sexiest city in the world: New York.

"In a city of great expectations, is it time to settle for what you can get?" – Carrie Bradshaw

Forget the pressures from your Jewish aunt trying to set you up with men from the synagogue that are still wearing Abercrombie & Fitch cologne at age 30. Forget your b*tchy co-worker, Janet, who keeps telling you to “not get your hopes up” with the guy you’re currently seeing because she secretly doesn’t want you to be happy.

Most importantly, tell that little voice inside your head to shut the f*ck up. You know what I’m talking about– the voice that is filled with self-doubt and internal loathing, wondering “Maybe it's me and I should just find someone tolerable, because the clock is ticking?”

This isn’t some bullsh*t meant to empower you– so you can pipe down about that. This isn’t some feminist article telling you “You is kind, you is smart. You is important.”

You’re a woman in New York F*cking City, so you already know who you are, and what you want. Meaning, you’re a bad b*tch and you’re looking for a man that is your equal.

…Except for one little problem: He doesn’t seem to exist.

Moreover, in this day and age, you certainly aren’t going to be meeting “Mr. Right” at a bar at 2:00AM in LES, or at Equinox where you look like trash next to all the Victoria’s Secret models.

So, you finally bite the bullet– or as I like to call it– sacrificing your integrity to the almighty gods of fertility and love and download: DATING APPS.

Although a rollercoaster of emotions, meaning disappointment and pettiness, dating apps can be pretty damn fun if you give them a chance. Its one of the best ways to not only learn about what you want in a partner, but to learn about yourself, and get a cutie (assuming you’re not catfished) to show you around new parts of the city while being drunk (errr buzzed) on some Chianti, all at the same time.

Dating online is a rollercoaster of emotions, both eye opening, hilarious, and downright disturbing.

Here are a few men you may come across on dating apps:

1. Men that are simply trash: 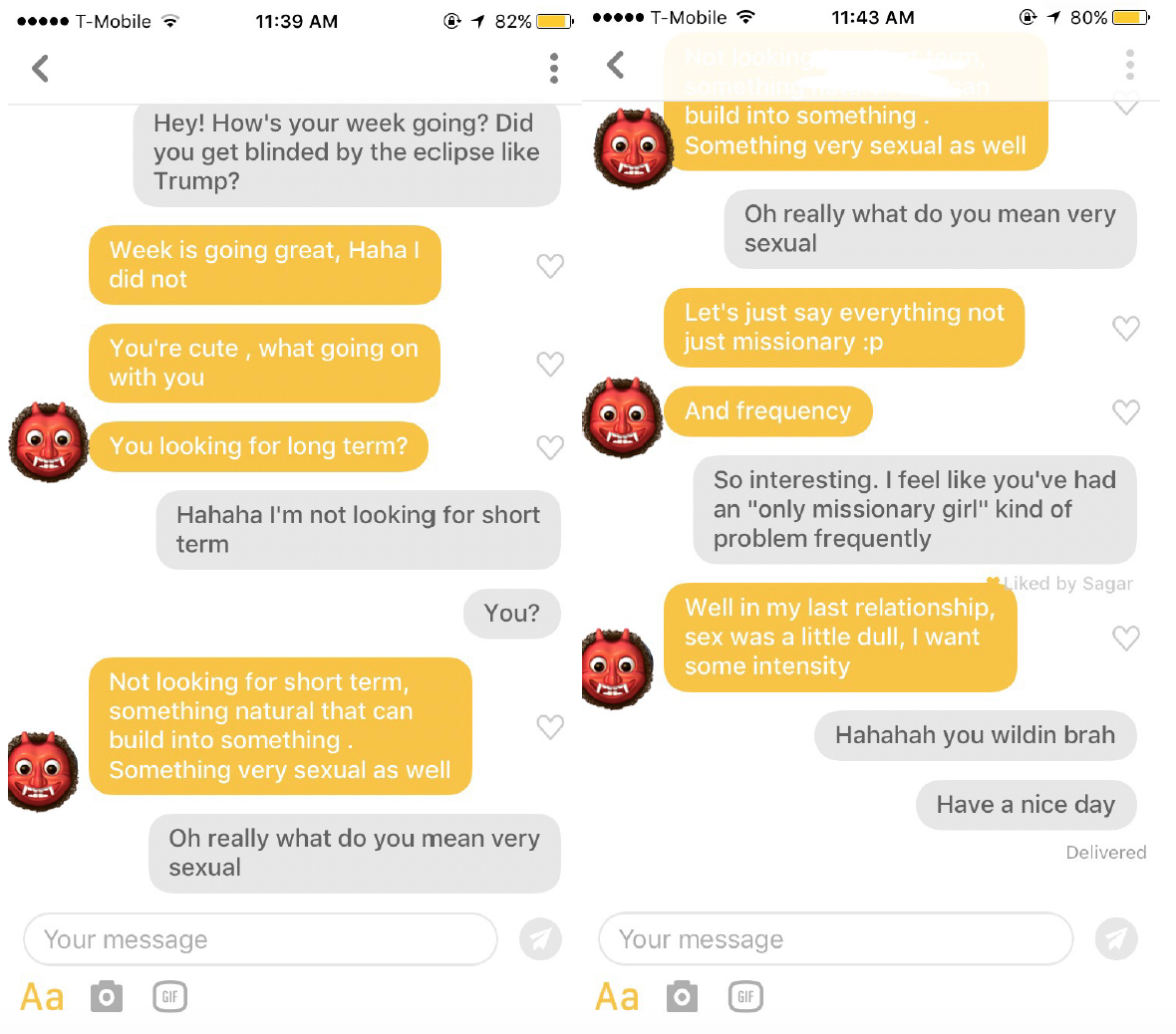 You’re looking for Mr. Right… he’s looking for Mrs. Right Now. And I mean literally– RIGHT now. All you’ve done is exchanged a few texts back and forth, and now he’s asking if you want to come over to his place in Queens at midnight?

If I wanted to get groped by a stranger who may or may not be an 80-year-old man on the other side of the screen, I would just choose to take public transportation. I get that enough of that sh*t in my life.

While I appreciate the straightforwardness… it is quite disheartening to think that men only want sex from you.

Does romance even exist in a world of swiping? I am Tinderella waiting for her Prince Charming.

2. Men that communicate strictly through emojis: 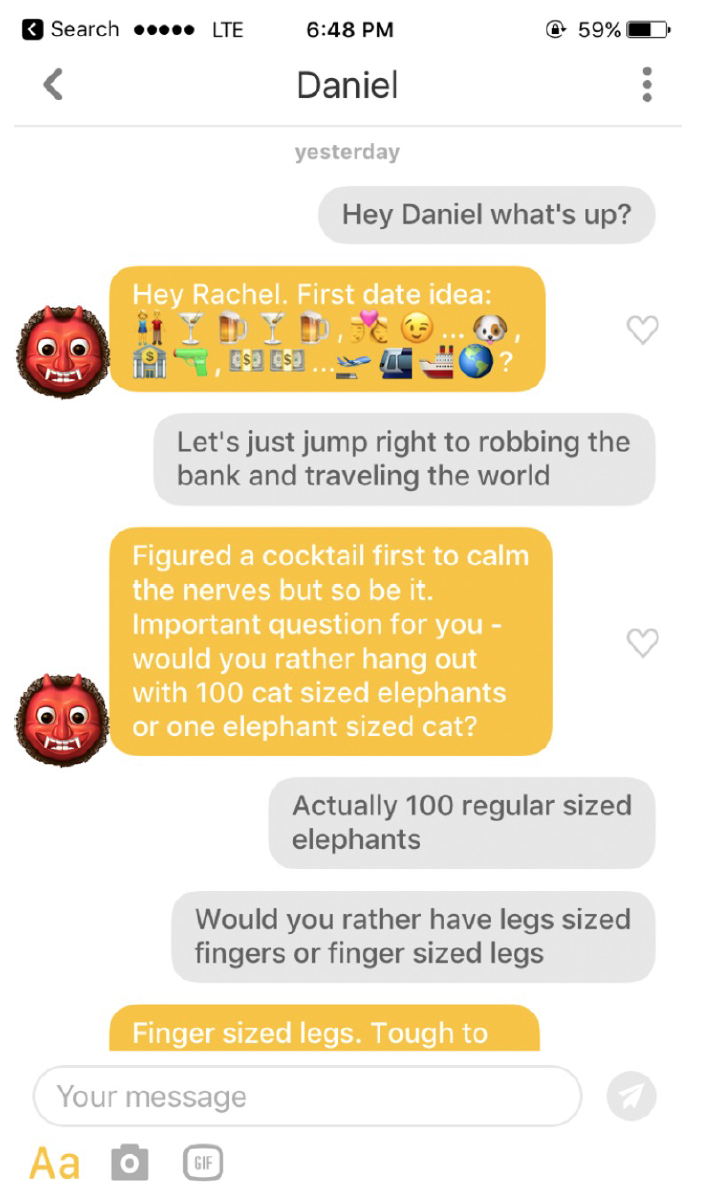 …And it seems that current political climate isn’t the only thing moving three steps backwards. Now we’re going back to hieroglyphics… IN DATING.

Which requires an insane amount of focus to decipher, might I add?

3. Men that have the personality of a rock: 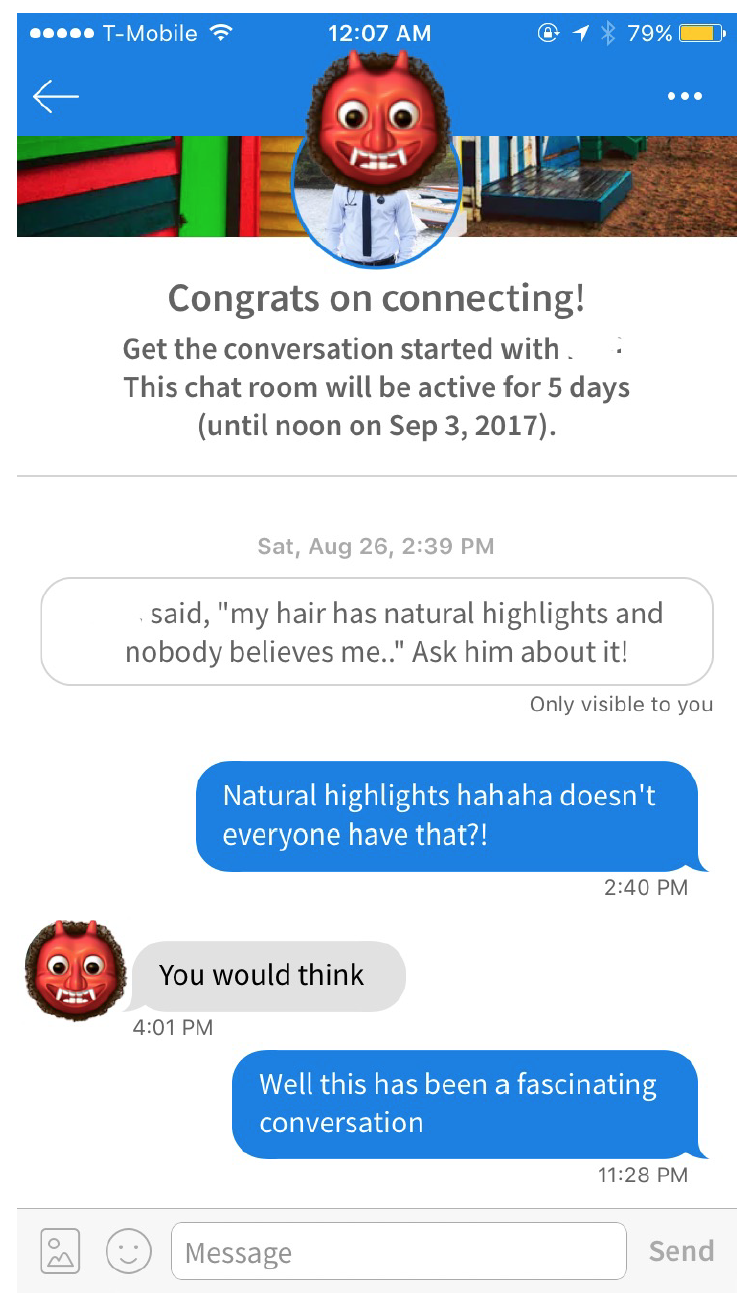 I can understand that texting isn’t the best form of communication and often, tone is lost in translation. However, that’s the best we have to work with here, so at least make your profile interesting.

Don’t give me two vague photos that contribute nothing to who you are as a person, and a blank ABOUT ME section.

Seriously? A LinkedIn search would have been more informative.

And to top it all off, you reply in 3 word texts and add NOTHING to the conversation. Give me SOMETHING. ANYTHING to work with here. I can talk to a wall– that would honestly be more interesting than talking to you, TBH.

There’s a reason you only get ONE first impression. Make it count.

4. Men that have a little TOO much pizazz….

When an online dating profile is the only information you have about someone, you have to wonder, are these dudes actually serious? I mean some of you ladies may be attracted to the quirky type, so this might actually be a pro for you. 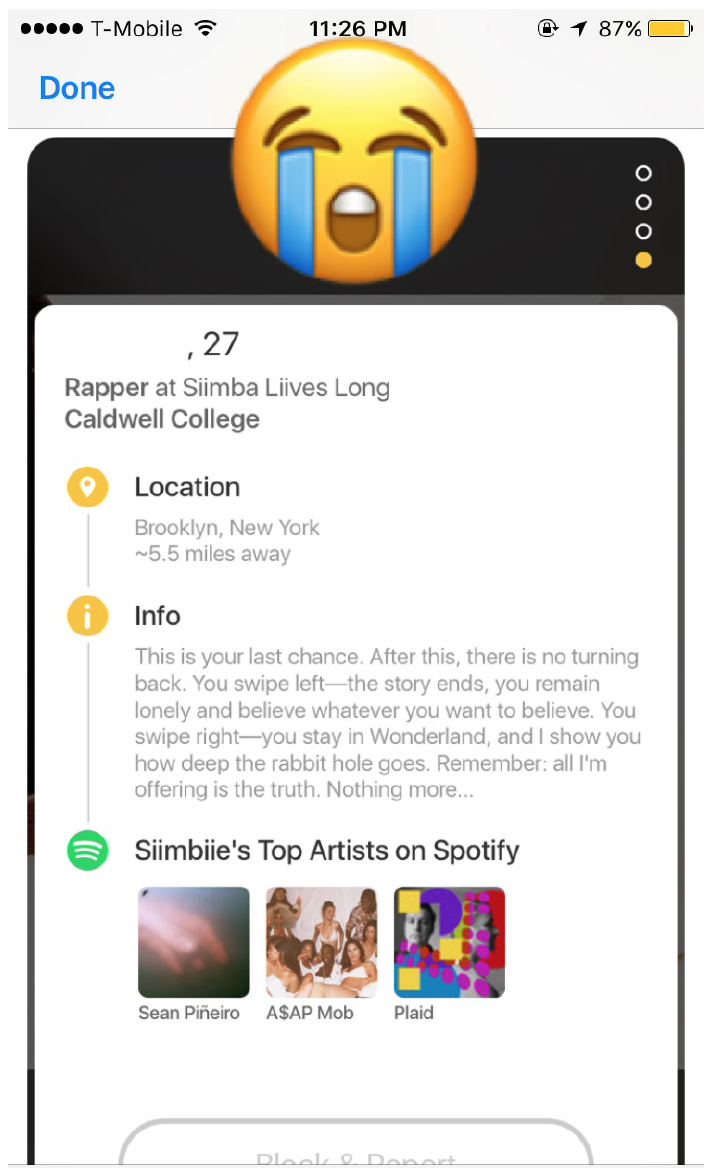 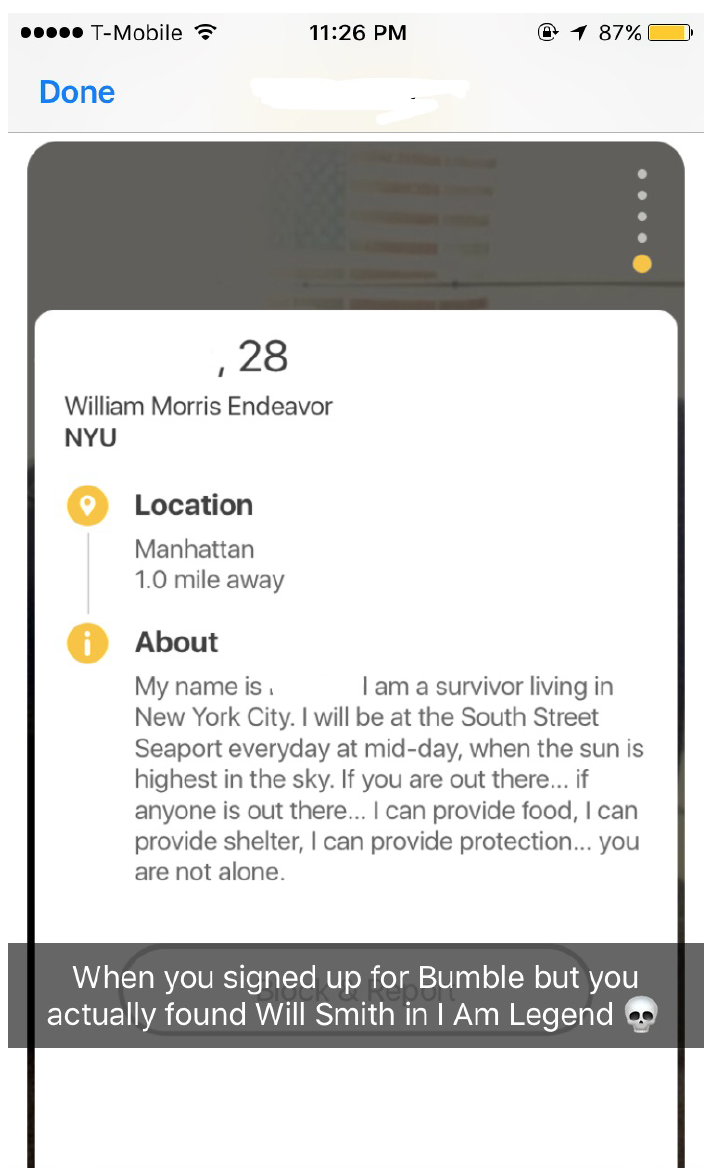 5. Men that are overly aggressive and just won’t f*cking quit: 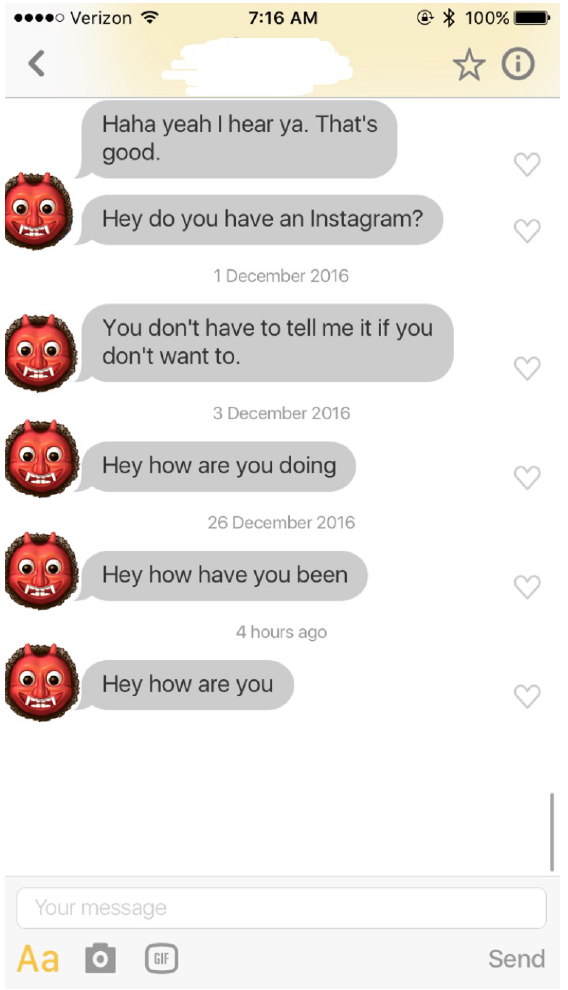 While I am the first to appreciate persistence when being courted, too much of anything = bad. If I didn’t reply on the 6th message, it is very unlikely I will be replying on the 30th message.

Pro tip: BLOCK THE NUMBER because they will get even more aggressive with profanity and slander as their frustration increases.

Maybe this was cute in 2nd grade, but it certainly isn’t charming now. I don’t have cooties. In fact, your rude comments are starting to make me feel like you have… SOMETHING. Or clearly something isn’t right with you, if you’re seriously hurting my feelings as a form of flirting.

Why are so many men out there trying to push our buttons as a way of making a “great” first impression? 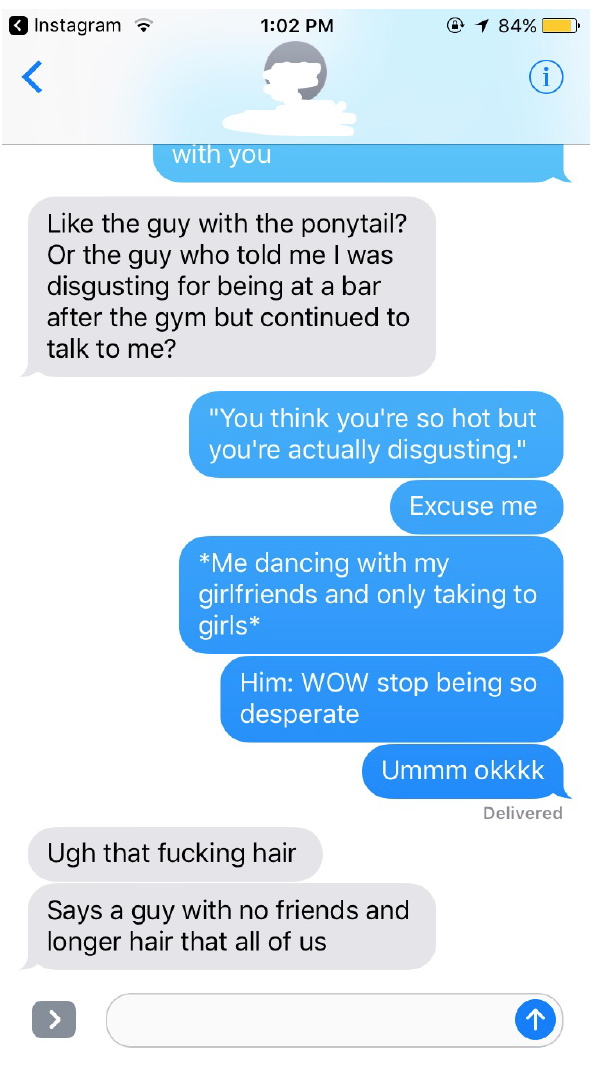 Is a sincere compliment truly a dead art form?

Playful teasing and flirting– I’m all about it. But please don’t tell me I’m disgusting and desperate… and then proceed to try and buy me a drink??? 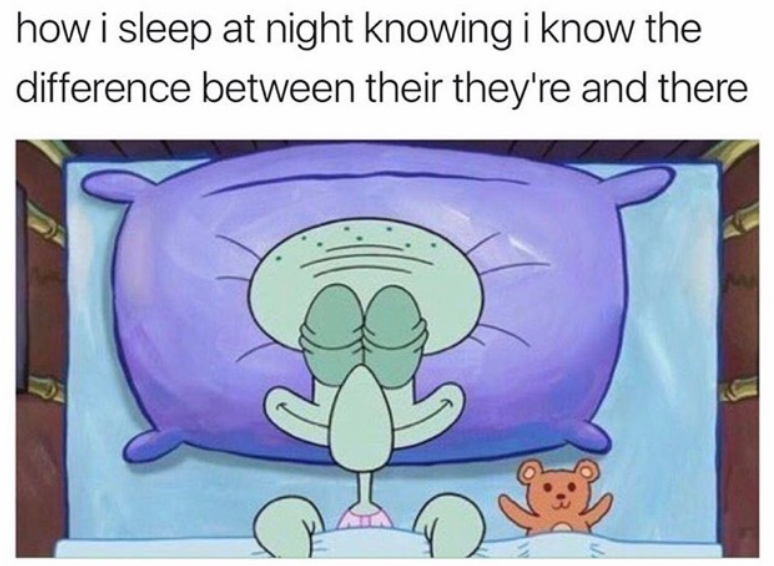 I’m talking grammar so bad that you actually question whether or not they even went to high school. Keep in mind these men have Masters and PHD’s and still say:

If you’re f*cking 30 years old and speaking to me (and your co-workers) this way, there’s a problem. And that problem is the fact that I am embarrassed. 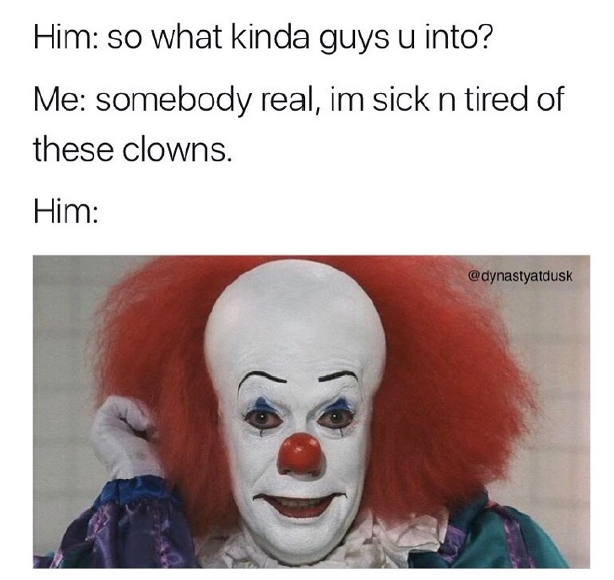 Perception is everything, and if the only thing I have to work with is a photo of you from five years ago when you were 50 pounds thinner… don’t act like I’m the shallow one when I get catfished.

Catfishing is REAL. This topic honestly deserves its own article. It just happened to me— the person was not only a completely different age than I expected him to be, but he was a totally different race as well.

PUT ALL YOUR CARDS ON THE TABLE. LET ME KNOW. Why would you waste both our times? Time is money.

Also, my makeup is incredibly expensive and I don’t want to waste my eyelash extensions on your LYING A$$.

PRO TIP: It's always better to undersell. That way, when they meet you IRL, they’re even more impressed because they had lower expectations, and now they’re trapped because you’ve entranced them with your brilliant personality. 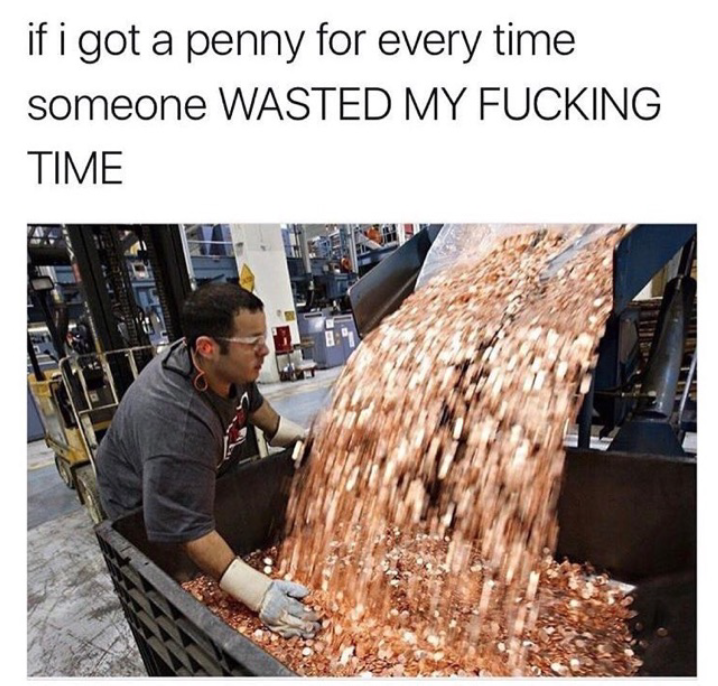 9. Men that are actually in long term relationships / married: 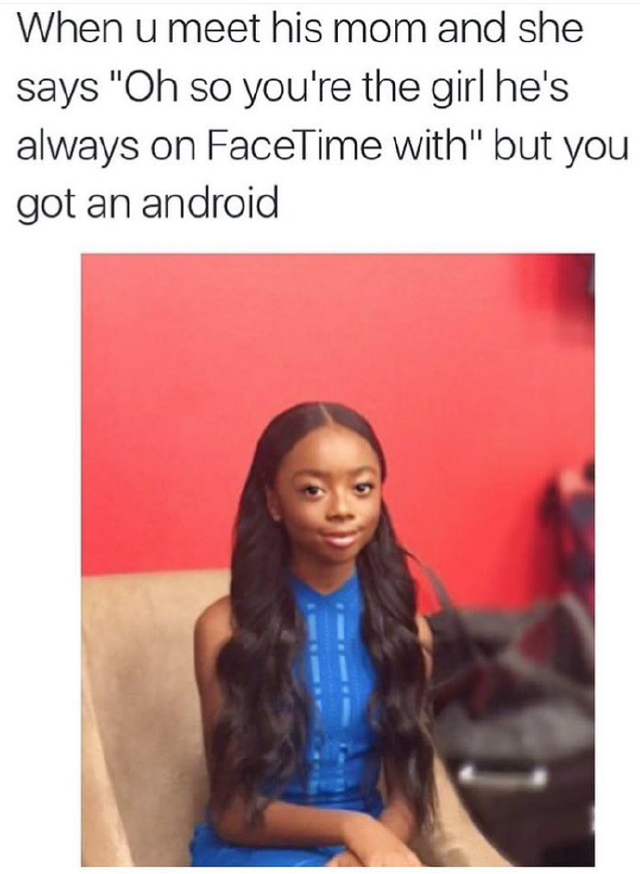 Sure does seem that way sometimes… how is a man with a wife* and KIDS on a dating app?? Did I mention HE HAS CHILDREN?

*Unless you have an open marriage or whatever, who am I to judge?

So, please be sure to do a quick pre-date stalking of your prospects on social media… just to confirm whether or not their wife is waiting for them at home.

10. THE DIAMOND AMONG STONES: 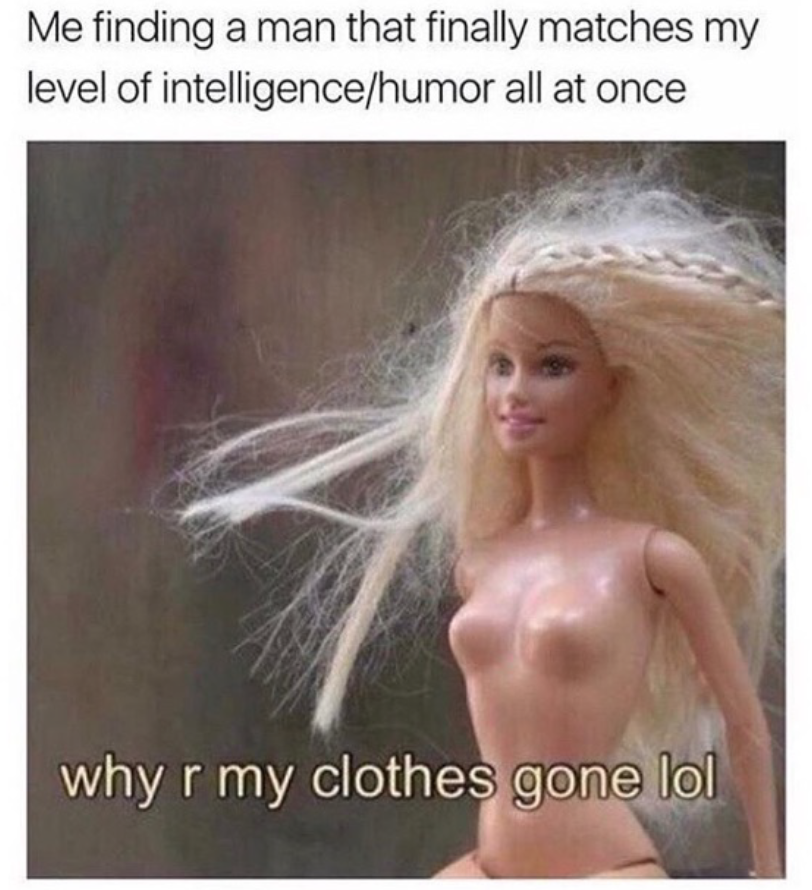 Despite the former types of men you may run across, there’s also a high chance you may meet a true gem. The type of man where even before you meet him, you already planned your future wedding #hashtag.

Don’t act like you haven’t thought of that before.

He’s a true charmer, the man you want to bring home to your parents, the complete “husband package:” gorgeous, sincere, intelligent, kind, and adorably funny.

All in all, you should probably just face the fact that dating has moved from IRL to online, so the best thing to do now is master your dating skills by weeding out the less-than-desirable prospects and have some laughs along the way.

Take a chance and put yourself out there! That way, when you’re old and wrinkly with a brownstone in West Village, you will have some hilariously juicy stories to tell.

I’ve met some incredible men on dating apps and I’ve also encountered some garbage. Overall, I’ve always made great friends and I’ve learned something about life and myself along the way.

Plus, the hilarious experiences you will have are amazing dating conversation topics for the next date. Like the time I almost got bed bugs… but that’s a different story.