11 Completely Free Things You Must Do This February in NYC

I'm gonna need to see a few less civil rights stripped away next month, you feel me?

But even though it's the end of humanity as we know it, that doesn't mean you can't have a little FUN, right?

Since you're now stashing your money under your mattress to prep for #endofdays; let's chat about all the fun you can have for FREE, in this amazingly diverse, accepting place we call come home!

... No really, you should be saving all of your money to pay for out-of-pocket doctor's visits when the ACA is dismantled. Happy February!

Highlights of their plans include performances by youth organization Urban Word NYC, who will be delivering relevant poetry and spoken word, performances by Amateur Night winners, music by Tre Trax, and a Family Workshop held by the Harlem Swing Dance Society.

Later, excerpts from Tell Them We Are Rising: The Story of Black Colleges and Universities, and the newly released I Am Not Your Negro, will also be screened. The latter, directed by Raul Peck, was adapted from Harlem writer James Baldwin's final un-finished work, and is narrated by Samuel L. Jackson. The clips will be followed by a panel discussion.

Like we said, admission is free, but you can register and read more about their programming on their website.

You are practical and resourceful, and you use what you have to succeed without taking a lot of risks. A hard worker, you say what’s on your mind and have a sense of style that sets you apart."

Celebrate your hard work, even if you're not a Rooster, you deserve it! Chinatown's Annual Lunar New Year Parade is not one to miss. There's uncomprable visuals, yummy bites, and unique cultural performances. The all-ages party winds through Chinatown at 1 p.m.

The 4-piece band from Chicago, NE-HI, is playing a free show at Baby's All Right in BK and you should totally go because this band is getting a ton of buzz right now! Their laid-back, post punk vibe vibe has them being compared to bands like Twin Peaks and Head North.

Perfect to spend an evening with to just take your mind away from it all... nothing in particular, of course. 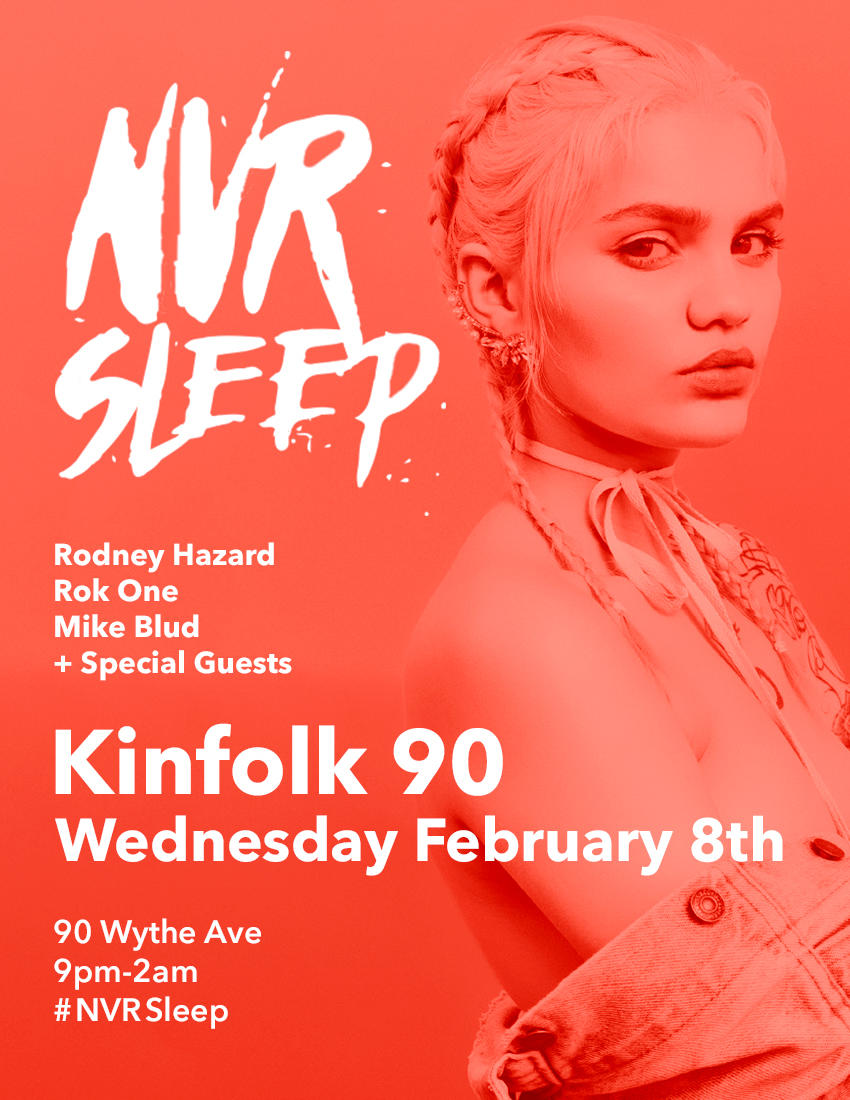 Hip-hop producer and spoiled Media Creative Director, Rodney Hazard—along with The Culture LP—is turning things up a notch or two at Kinfolk 90 in Williamsburg next Wednesday for the 1-Year Anniversary of NVR Sleep.

Oh you weren't there for the first-ever NVR Sleep? We don't blame you. It was f*cking cold. The wind was insane. It was miserable outside. But, make a point of going next week.

It's NVR Sleep: The Lover's Edition! So, grab your lover by the hand, sip (or knock back) a beverage or three, get your nom on, and give yourself a high-five for locating a Wednesday night party without scraping together cash for a cover charge.

Nothing makes us want to dance more than a free dance party, so grab a friend and get ready to shake it all night long, from 9 p.m. to 2 a.m. We believe in you. But don't get left out in the cold. RSVP here.

The FREE couples and singles-friendly will be hosting the best up-and-coming NYC retailers for chocolate, jewelry, lingerie, pleasurables (not sure what that specifically means, but we'll guess), and dessert at 435 Broome Street in Manhattan.

"Singles-friendly" might not seem like the most welcoming phrase, but don't be dissuaded– they will have free makeovers, free massages, free hot cider tastings, a photo booth, and you'll be able to check out those pleasurables we were talking about earlier.

The pop-up shop will be that whole weekend too, so there's no reason you shouldn't stop by.

"This exhibition examines the literary, artistic, musical, and cultural aspects of Venice’s seductiveness"...OOH!

Seriously though, GO TO THE LIBRARY YA DAMN KIDS. It's so friggin' cool.

This exhibit is sure to educate on all things amore with works ranging from wedding poetry, to pop-up books that show "undergarments" (LOL) of Venetian prostitutes. Check it out, ya creeps!

Bundle up, throw some hot toddies in your thermos, and head to Central Park to see ice carvers make romantic statues with power tools!

And then IDK make a snow angel or something. You'll def want to stick around though, because at 5pm, you can trade your ID for headphones and dance at an outdoor silent disco! There's DJ's there's colorful lights, there's ice sculptures: it's gonna be weird and wonderful.

It's Fashion Week in NYC! But not for us poors. OH WAIT: the American Friends of Bezalel present "A Walk Of Art"!

This is a showcase of over 60 contemporary women's footwear designs, with themes ranging from the more traditional, to futuristic and fetish; the sky's the limit! The shoe's the limit? Go see a man about a shoe? There are going to be a lot of shoes at this exhibit.

Kill two birds with one stone, in a way, at this singles event, where everyone will feed and clothe the homeless people at Penn Station. Just saying, it’s a lot easier to weed out the f*ckboys when you’re at a volunteering event. BUT OBVIOUSLY, that’s not the most important part.

February in NYC can get frigid, and even more so without that fuzzy Canada Goose Jacket. The best things you can bring are a couple of used hats, gloves, and coats– they have more suggestions here.

While Times Square is where most of the relationships in my life have fallen apart, this Valentine's Day, couples can take a picture on the red glass steps in front of a heart sculpture! Or you know, renew their marriage vows!

Aw! Have fun you two! Seriously! I'm fine! You're the one I'm worried about! I've made all the right decisions!!

February is Black History Month, and AFROPUNK (in association with Harlem Stage and The Apollo) is commemorating by hosting a series of events throughout Harlem. The kick-off event is tonight, an open panel discussion featuring such creators and activists as Zoe Kravitz, Sade Lythcott, Matthew Morgan, And Larry Osse-Mensah. Reserve Your Ticket Now!