WTF Is the Zika Virus & Should New Yorkers Be Concerned?

If you've picked up any newspaper, listened to any news radio, or watched any newscast in the past couple of days, you've probably heard of this new virus, Zika, spreading rapidly throughout the Americas.

But what the hell is the Zika virus, and how does it affect New Yorkers? Do you have cause to be concerned?

The Zika virus is a virus spread by mosquitoes that might cause some pretty extreme birth defects when contracted by pregnant women.

Until very recently, the Zika virus was only a blip on the health radar known only as a virus that causes symptoms such as pink eye, fever, rash, and joint pain. However, according to the Center for Disease Control and Prevention (CDC), the symptoms only develop in about 1 to 5 people.

While the illness is only believed to last for a few days to a week, not much is known about the virus itself. However, the World Health Organization stated that as many as four million people could be infected by the end of 2016.

The main cause for concern is not due to symptoms, but due to the effects that the virus seems to have on unborn children when a pregnant mother is infected.

The alarming growth in the number of cases of microcephaly, which is described by The New York Times as "a rare condition in which infants are born with abnormally small heads and damaged brains."

The connection comes after the rate of microcephaly has risen along with the sharp increase in Zika diagnoses in Brazil.

While the WHO and CDC cannot determine whether the two are linked, the CDC is advising against all pregnant women, and women who may become pregnant, from traveling to Caribbean and South American areas rife with the virus.

Health Minister Eduardo Espinoza of El Salvador has even "urged women to refrain from getting pregnant before 2018," according to The Washington Post.

Unfortunately, the virus has already hit home. NBC New York announced that as of January 28th, there have been three confirmed cases of the Zika virus in NYC, including a pregnant woman. Four other people in the state of NY have been diagnosed with the virus. 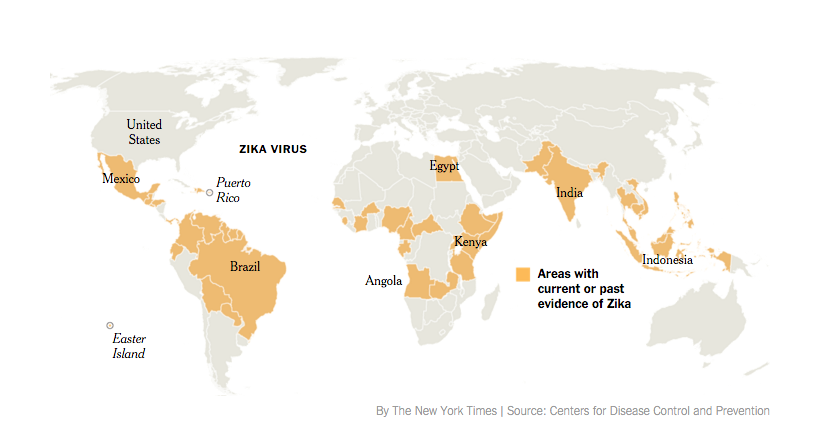 Apparently, these people have been diagnosed after traveling to infected areas.

Unless you're planning on traveling to areas currently infected with the Zika virus (in which case, we urge you to rethink your vacation plans), there is almost no possibility for the spread of the virus in NYC during the winter.

Be careful out there.

Check out How NYC Restaurants Get the Absolute Freshest Fish Possible on a Daily Basis.