One Woman Really, Really Hates the Plans for Manhattan's Next Super Tall Condo

With less and less space available in New York City for buildings, developers are shooting for the skies, building incredibly tall skyscrapers that have dramatically altered our skyline.

While these luxury buildings may be enticing for those who can afford the severe price tag (and for those who collect on the rent), they're angering many residents who will be cast in the shadow of these behemoth buildings.

For one woman on the Upper East Side, the plans to develop a 90-story condominium tower (reaching 1,000 feet) is the bane of her existence; ruining her panoramic views of Midtown, but most importantly: snuffing the natural light from the Pablo Picasso painting, Woman Drawing, on her walls.

Bloomberg reports that the resident in question, Phyllis Hattis, is heartbroken because "to see this painting without light and without air is to lose it." We feel ya, Phyllis. We're all about preserving the essence of your authentic Picasso in your private art collection.

Neighbors with similar concerns, though decidedly less pretentious, have bonded together to attempt to block the development by filing a rezoning proposal before they being construction.

Unfortunately, the current zoning policies allow the developer, Bauhouse Group, to construct this mammoth skyscraper on the land of the three low-rise buildings they purchased last January.

In the past year, they have been buying air rights from neighboring properties, which can then be used to add additional height to the tower. The current 55-year-old zoning policy does not impart a height restriction.

Councilman Ben Kallos, one of the applicants in the rezoning proposal, stated that "this neighborhood will rezone before this building can go up. I'm so tired of people saying that 'as of right' means the community can do nothing."

The term "as of right" refers to the claim of legality in construction.

Alan Kersh, President of the co-op board at the Sovereign on 58th street, and co-applicant of the proposal, stated that the 55-year-old zoning laws are from a time "when engineering capabilities never envisioned building such a tall building on such a small piece of land."

However, the Connecticut-based development firm responsible for the construction of this building is continuing, going so far as to begin demolishing the smaller properties where they wish to develop. 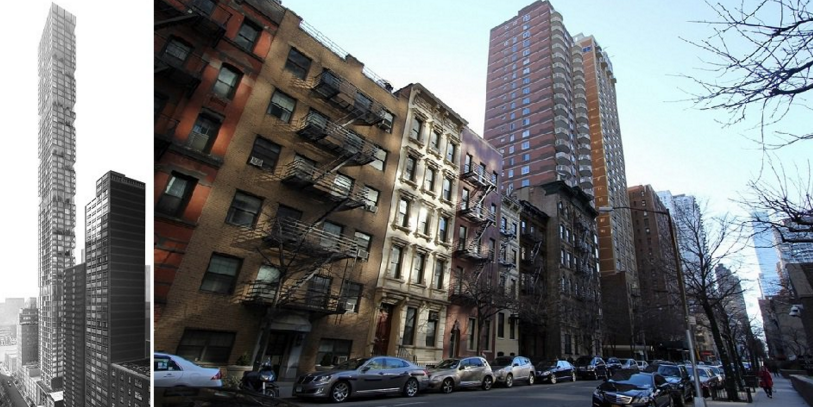 "Our project will be nearing completion by the time any rezoning would be hard," stated a spokeswoman for Bauhouse.

We'll be watching to see if this semi-David and Goliath story turns out in favor of the little people (as in the people with private Picasso art collections) or the big businesses (as in an out of state developer).

We're not too sure we can sympathize with either, though. We're kind of sick of companies coming to NYC to build massive luxury buildings that no one can actually afford. But then again, we also find it hard to empathize with a woman complaining about the lack of natural sunlight to her Picasso.

Regardless, this is one of the first examples of gentrification on the gentrifying. With space becoming more and more limited, and demand driving prices through the roof (no pun intended), developers are recognizing the potential profit in demolishing small buildings for their skyscrapers.

Jonathan Miller, the president of Miller Samuel Inc., an appraisal firm, stated that the "price of land is based on the idea that you have to build that tall so there's really no choice because the profit as at the height."

Unfortunately, for the residents in the surrounding neighborhoods, this also means that there is a chance your Picassos and Warhols will be engulfed by the shadow of an architectural giant, like Ms. Hattis's.

"The art and life surrounding us would be dwarfed. We would not only be dwarfed by the scale, but I feel like I would be in a dungeon-- in chains."

Check out That Fortuneteller Who Took a Guy for $550K Just Got Out of Jail.