Winter Storm Jonas Will Hit NYC This Weekend With Up to a Foot of Snow!

So yesterday we told you about the multiple weather forecasts predicting a pretty decent chunk of snow headed for New York City this Saturday.

It looks as if those predictions have more than a bit of merit to them.

No, we're not talking the Jonas Brothers here... though, they do tend to cause quite the storm with the teenyboppers. Kidding. Nobody cares about them. Not even the teenyboppers. Why? Because teenyboppers aren't real people. That's how monsters like Bieber happen. Thanks.

But we digress! It's time to run to the store and grab your milk, bread, and eggs (or more likely booze and Cup of Noodles) because NYC may be getting anywhere from 5 inches to 12 inches between late Friday night and Sunday Morning.

Apart from the cumulation of snow due to Winter Storm Jonas, we're also predicting some pretty heavy winds that could cause some pretty hefty snow drifts.

What do we mean by heavy winds? The storm gusts could reach near 40 MPH.

While weather forecasters are still hesitant to talk numbers, it seems pretty much a given that we'll be shoveling out our cars this weekend. 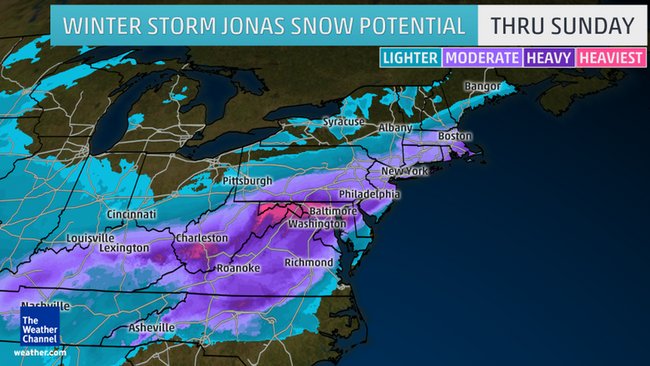 Check out Winter Jam in Central Park Is This Weekend.