The End is Nigh! This New Williamsburg Office Complex Has Everybody Nervous

Earlier, we reported about the office complex that's in the planning stages for 25 Kent Avenue.

If it acquires all the necessary permits, the office complex will be the first ground-up, largely office building built in Williamsburg in more than ten years.

The building's developers are running into roadblocks, though, both from North Brooklyn's Industrial Business Zone, and from the community.

Based on North Brooklyn's Industrial Business Zones rules, co-developers Heritage Equity Partners and Rubenstein Partners could build their retail and office space, but would have to designate half of the building as a non-profit, or a religious or medical facility.

The developers are trying to hurdle those rules and designate that half of their building to manufacturing instead.

According to Gothamist, there's been an amendment drafted and cosponsored by the Department of City Planning and the property's developers, which would allow new developments in the zone to be mostly commercial, as long as there was also space for light manufacturing.

The new amendment would require 5,000 feet of light industrial space for every 12,500 square feet of commercial space.

They also want to build taller than the law currently allows. Much of Williamsburg and Greenpoint's buildings are required to be less than 80 feet in height, and 25 Kent Avenue's developers want to build it 135 feet tall.

Of course, Williamsburg locals are concerned about the way an eight-story office building would alter the flavor of the neighborhood.

The amendment was presented to Brooklyn's Community Board 1 on Tuesday night, and was received with doubt.

"Basically you're building an office building in the IBZ zone," said board member Trina McKeever. "So what the city planning's envisioning is a whole neighborhood of these eight-story office buildings."

Ray Levin, Heritage Equity Partners' lawyer, responded by pointing out the increasing residential and commercial development that's been brought to the area since it was rezoned in 2005. 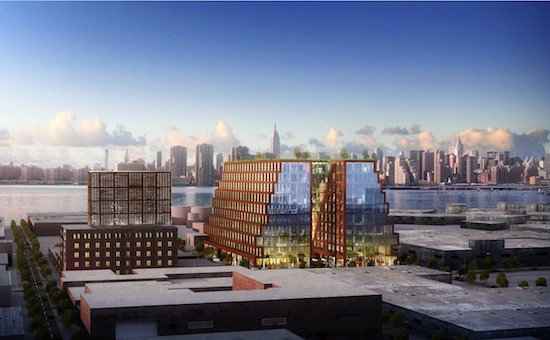 If you ask us, the idea of having a school, medical center, non-profit, or religious facility nestled in among the office space doesn't sound like that bad of an idea, but hey, we're not city planners.

Several small business owners were frustrated that they wouldn't be offered the same opportunities to build up under the amendment, which, if we've learned anything from the recent small business closures in Manhattan, is a fair argument.

Luckily, the developers still have to go through an extensive Uniform Land Use Review Procedure and come before city council before these plans are approved. The first public hearing will be on March 21st at 6 p.m. in Brooklyn Borough Hall.

Check out This Map That Shows Where Else You Could Live in the U.S. with Brooklyn Rents.