In the Navy Yard, yes, you can buy groceries.

It looks like the Brooklyn Navy Yard is bumpin'. Between political showdowns and new plans for a Brooklyn Brewery beer garden, it's quickly becoming a weird sort of hot spot for New York City residents.

Now, a massive Wegmans is set to make its mark on the famed Navy Yard.

The Wegmans is set to move into a 250,000 square foot building with five floors.

While Wegmans will be using the first floor and mezzanine level, the rest of the building will be used for light manufacturing.

In addition to all that space, there are plans for a parking lot that is roughly 100,000 square-feet and will have about 246 spaces.

This Wegmans will be the first in all of NYC and will be furthering the trend of big corporate grocery stores in the city.

Trader Joe's seems to be practically everywhere, and it looks like they have no plans on stopping either with even more stores lined up in the future. And this is only hurting the local grocery chains that been a staple in NYC's history.

We recently wrote about the famed D’Agostino grocery store chain selling off their nine remaining stores. D'Agostino calls itself "New York’s original grocer" and it's starting to look like originality is spoiling all around the city.

Whether Wegmans is ready or not to join the food fight that is this city's grocery wars, they are now right in the thick of it. But what better place to wage war than a Navy Yard? 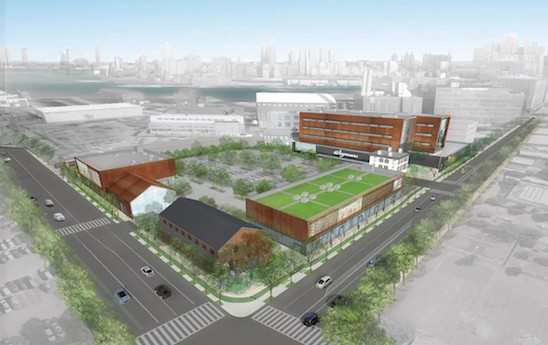 Check out 8 Situations from Broad City Nearly Every New Yorker Has Been in IRL.