February is Black History Month, which means it's a month devoted to celebrating some of the most innovative, intelligent, and artistically brilliant citizens of the United States.

It's also a month to celebrate the heroes of the civil rights and voting rights movements, and a month where we recommit to the quest for equality in America.

There are a lot of events going down in New York City to celebrate Black History Month, which pays an important homage to black Americans.

In 1926, the ASALH sponsored a national Negro History Week during the second week of February to overlap with the birthdays of Frederick Douglass and Abraham Lincoln.

Want to take part? Read on to find out how you can celebrate this year's Black History Month in NYC below.

1. Panels and lectures at the Schomburg Center in Harlem (515 Malcolm X Blvd)

As with years in the past, the Schomburg Center offers a variety of lectures and panels.

This year's topics include "Respectability and Activism," "Black Power and Political Repression," and "The Black Presidency: Barack Obama and the Politics of Race in America."

If you're interested in learning about Black history, taking in jazz performances, and participating in conversations about being black in America, browse the Schomburg Center's black history month events here.

On Friday, February 5th at 6:30 p.m., The Black Panthers: Vanguard of the Revolution will have a pre-release screening.

The movie will be shown at St. Johns Recreation Center in Brooklyn, and if you attend this event, you'll have the satisfaction of checking out the film before it's aired on PBS on February 16th.

The documentary centers around the revolutionary culture that emerged in the United States during the Civil Rights Movement of the 1960s. It weaves together a collection of rarely-seen footage from the pivotal movement.

Do you really have anything better to be doing on this Friday in Black History Month? We thought not. The event is free, but register here to reserve your seat.

brooklynmuseum In honor of #blackhistorymonth and the 50th anniversary of the Black Panther Party, this #targetfirstsaturday we're celebrating the past, present, and future of the black radical tradition. Through art and performance, discover everyday acts that can transform our world. See the full lineup at bit.ly/targetfirstsaturday

The Brooklyn Museum is turning up for Black History Month on February 6th. As in, they're hosting 12 events, all of which will take place between 5 p.m. and 9 p.m.

They'll have music, with performances by Charles Perry, Dasan Ahanu and Tai Allen. They'll offer the opportunity to explore the past, present, and future of black radicalism with the Museum of Impact through interactive activities.

There will be hands-on art, gallery talks, workshops and films. It's all going to be extremely emotionally and intellectually stimulating.

Caught your attention? Interested in attending? Check out the calendar of events here. 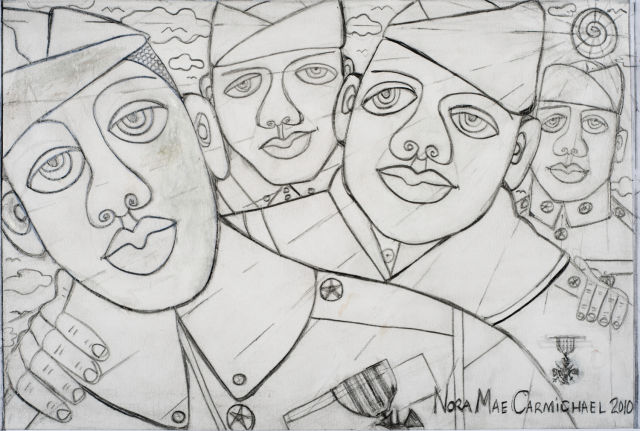 This exhibition will be on display every weekday until February 26th from 9 a.m. to 5 p.m.

Presented by NYC Parks Ebony Society, it'll take place in the Arsenal in Central Park on the third floor, and it's entirely free.

The exhibit celebrates noted government officials, starting with the first African American elected to office in 1768, as well as activists and members of the public who dedicated their lives to the greater good of the United States' populace.

Come out to this exhibition this month; it should be pretty incredible.

reckless_saint242 There is no such thing as failure only lessons! #noexcuses #noregrets #georgewashingtoncarver

On Tuesday, February 16th from 1 p.m. to 2:30 p.m., the Queens Botanical Garden will be hosting a Dr. George Washington Carver workshop to celebrate Black History Month.

Since Dr. George Washington Carver made extremely significant contributions to the field of botany, those who attend will use Dr. Carver's steps to use plants to paint and create a healing lotion to take home.

If you attend, you'll also learn about the early life and achievements of Dr. George Washington Carver. This event costs $6, and you can register here.

If you ask us, it's a great opportunity to finally visit the Queens Botanical Garden, while also taking part in something bigger than yourself.

177 years ago, those aboard the slave ship Amistad rebelled. What happened afterward? Well, you'll have to come check out this screening and discussion to find out, won't you?

Okay, we'll tell you what happened. In 1839, 25-year-old Sengbe Pieh broke free of his bounds on the Amistad and released the rest of the Africans on board. They revolted, killing most of the crew and forcing the ship's captains to return to Africa.

However, the captains secretly steered the ship west at night, and eventually landed on Long Island in 1839. The U.S. Supreme Court heard the case, and ruled in favor of the Africans.

It's a compelling story, and we expect the documentary will be pretty fascinating. The film is based on Marcus Rediker's The Amistad Rebellion: An Atlantic Odyssey of Slavery and Freedom.

There will also be a post-screening discussion. The whole event will take place at the Jamaica Center for Arts and Learning Black Box Theater on Friday, February 19th from 6:30 p.m. to 8 p.m.

This event is free. Email programs@kingmanor.org to reserve your seat.

Check out 13 Must-Do Events Going Down This Month in NYC.