Savage, Yet Respectful: 'Humans of New York' Just Roasted Donald Trump for Being a POS

It's hard to turn on the TV or computer today without something regarding the 2016 Presidential Election. That's not necessarily a bad thing, though.

You need to pay attention. It's wildly important.

Unfortunately, this presidential primary race has drawn much more criticism than genuine concern from the American public, and there is little surprise as to why.

Donald Trump's methods in the attempts to secure the Republican candidacy has caused many Americans to question the respectability of the presidential campaign and the standards of the office itself.

Recently, Brandon Stanton, the photographer and journalist behind the Humans of New York books and viral Facebook page of the same title, penned an open letter to Donald Trump denouncing Trump's morals and methods regarding Muslims, immigrants, and racism.

In a short, but succinctly powerful message to Donald Trump, Stanton states that "opposing [Trump] is no longer a political decision. It is a moral one."

Stanton typically never gets personally involved in any kind of political discussion, rather opting to use his work as a platform for the oppressed and marginalized to illuminate the oft-forgotten human struggles at the heart of racism, sexism, genocide, and immigration.

He's even spent the last two years traveling in war-ridden countries to interview countless Muslims and immigrants, helping some find financial and political refuge in foreign countries, merely because their story had a space to be told.

His post, which is included below, condemns Trump's tactics of retweeting racist images, hate speech, encourages violence with promising to "pay the legal fees," of those who follow through, his talk of "executing Muslims with bullets dipped in pig blood," and the advocation of torture and murder of the families of terrorists.

Stanton concludes with this poignant statement:

"Those of us who have been paying attention will not allow you to rebrand yourself. You are not a 'unifier.' You are not 'presidential' You are not a 'victim' of the very anger that you've joyfully enflamed for months." 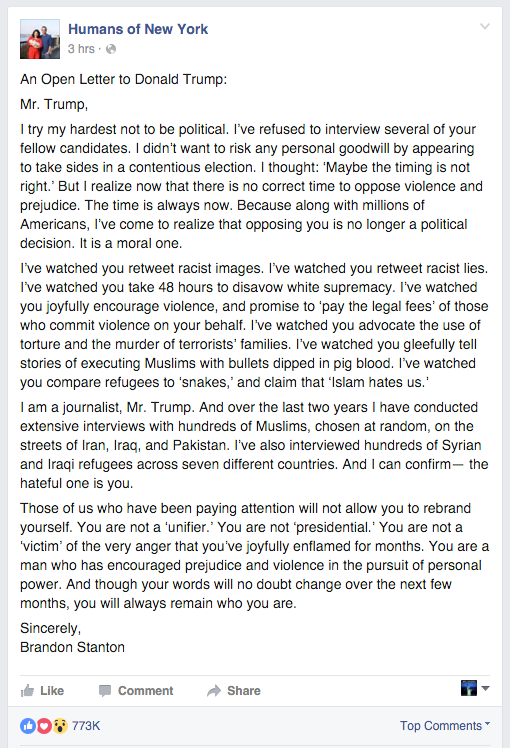 "You are a man who has encouraged prejudice and violence in the pursuit of personal power. And though your words will no doubt change over the next few months, you will always remain who you are."

While we're not going to touch Trump's policies, manhood, or tenuous affiliation with the GOP, we agree wholeheartedly with our fellow New Yorker, Brandon Stanton. To us, his morals and beliefs embody true New York values.

Don't think of this as New Yorkers abandoning one of their own. Instead, forget the idea that we were to ever embrace Trump as one of our own to begin with.

To the man who has incited violence without abandon, spoken in both diatribes and platitudes of the bigot, and denigrated the level of political discourse to that of a gutter speak of cowards, rats, mongrels, small minded, you do not embody American values, much less those of the New Yorker.

Check out The NYPD Hate Their Jobs & Think NYC Is Much Less Safe Now.