Got 'Trump Anxiety?' There's a Special Massage Deal in Brooklyn That'll Work It Out

Ugh, election season. People on both sides of the spectrum spewing propaganda, hailing insults, and generally alienating each other simply because of their opposing political views.

Let's just sum it up and say that it's a stressful time for the American public.

So how about easing out those kinks with a massage? Nothing could be politically charged when it comes to a massage...

There's a masseuse in Prospect Heights who is really #FeelinTheBern, and wants you to feel it too.

Darcy Stockton is offering the "Moneybags Massage," so you, too, can feel like the multi-millionaire with a (somewhat?) plan to "Make America Great Again..."

This massage comes with everything you could ever dream of in a rich person's massage, though minus the shady stuff that goes down in backrooms of alleys.

For $200, you receive a 2-hour, new-money scented massage. Sounds delightful already. In those two hours, you will also relax with a "minted" foot rub and a hot orange scalp massage.

Just think: you can feel as if your hair is as flaxen as the potentially fake hair that has been artfully combed over Trump's scalp.

Oh, did we mention that 20% of the proceeds from the massage are donated to Bernie Sanders' campaign? 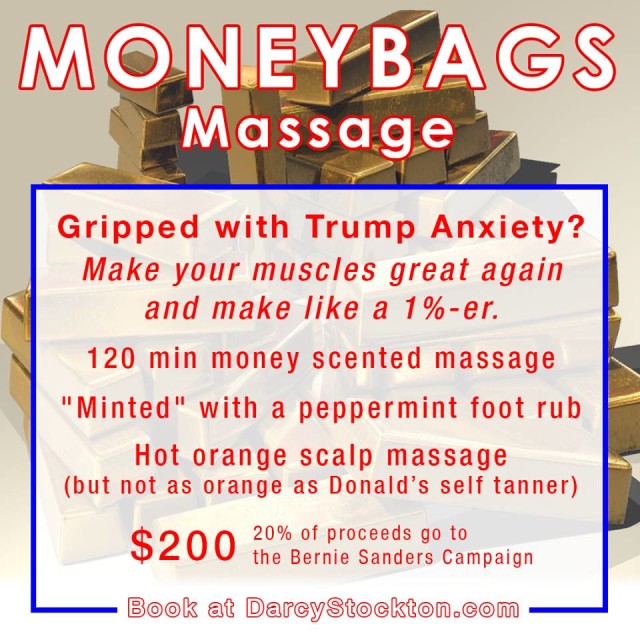 Maybe you're feeling a little alienated by the Trump's fear mongering, and would rather have "The 99%" massage, which costs a mere $80 for a half hour massage. Don't worry, she'll toss in a free-for-all milk and honey foot scrub to sweeten the deal.

Like the "Moneybags Massage," 20% of the proceeds from the "The 99%" massage will be donated to the Sanders campaign.

No word on how the other candidates are responding to being left out in the massage race.

Check out Google Searches of 'How Can I Move to Canada' Jumped 1,100%.