Loving Your Neighbors! Times Square Is Setting up a Valentine Heart for NYC's Immigrants

As fellow New Yorkers, we gotta admit that New York City has no shortage of date ideas, restaurants, and even things for those who are single this upcoming Valentine's Day.

And one of the best things to do is to visit Times Square for their annual heart shaped art exhibit. Because hearts equate to love. Duh.

However, this year that love is reaching beyond couples and family members at the heart of NYC.

This year’s installation, titled "We Were Strangers Once Too," highlights the role immigrants have played in making New York, well, New York.

According to Time Out, the exhibit is based on data from the 2015 American Census Survey focusing on the level of diversity within the nation.

The heart will be consisting of 33 metal poles inscribed and color-coded to represent the national origins and shifting populations of foreign-born NYC residents.

We shouldn't be surprised, since NYC is the largest city in the United States that has a population defined by a long history of international immigration, hence the term 'melting pot' used to describe our level of diversity.

As visitors (aka: us) move around the sculpture, their perspective shifts until individual blocks of red and pink resolve into the shape of a heart.

Kinda like how if you shift your perspective, you can see the love this city really has—and has demonstrated unwaveringly in spite of recent, ill-conceived garbage courtesy of POTUS. 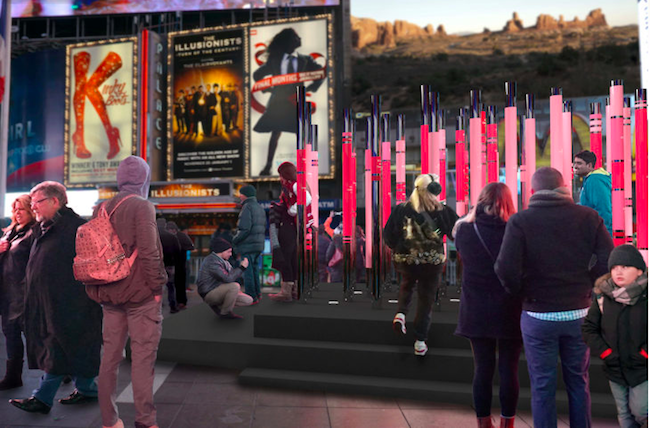 Happy thoughts people! (Editor's Note: But, you know, not like an "All Lives Matter/Love Trumps Hate/Hug Your Hater" tedious kind of happy thoughts that ignores, and, consequently, forgives atrocity and garbage humans of their shit.)

The piece will be on view for a month starting February 7th at Father Duffy Square, between 46th and 47th. We hope to see your faces there, with love for the city and all of its residents.