Single People Like Fun Too: 6 Must-Do Things for Singles on Valentine's Day in NYC

If you weren't already aware, Valentine's Day is hurtling toward us with force. All over the New York City, couples are making reservations, having conversations, and deciding how to spend the weekend of February 14th.

Here's a fact you might find surprising:  Single people are people too, and single people enjoy fun just as much as people in relationships.

Luckily, NYC throws down all the time, and there are plenty of events for you to enjoy on Valentine's Day in NYC whether you're in a relationship or not.

Guess what? Sometimes in NYC, coupling up isn't our priority. Sometimes, we're all too busy balancing our careers, our friends, our tiny apartments and vibrant social lives, that finding a romantic relationship falls by the wayside.

This doesn't bother us, we don't hate Valentine's Day, but we do still want to have fun that weekend in NYC.

If you're single and you still want to have a blast the weekend of Valentine's Day in NYC, stick with us and we'll tell you how. Read on to find out. 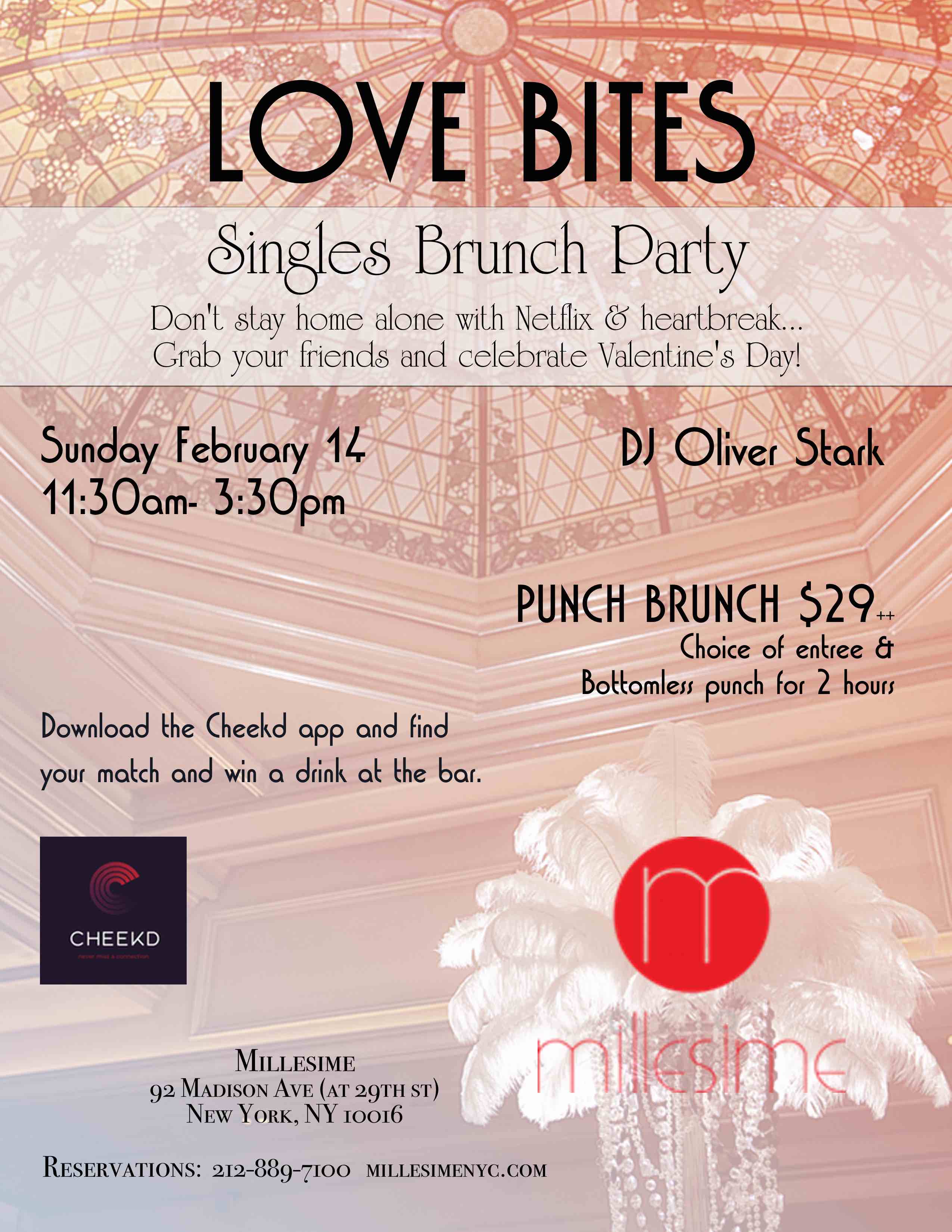 There will be a punch brunch for $29, which will include a choice of entree and bottomless boozy punch for two hours. So, yeah, you'll definitely get buzzed.

DJ Oliver Stark will be spinning tunes, and everyone will be getting wild. Grab your most fun single pals, and make your reservations here. You know you want to. Oh, and download the Cheekd app here.

kaleighdwilson Nothing says romance more than naming a cockroach for that special someone. 💝💖💘 #cockroach #romance #valentinesday #bronxzoo #betterthanflowers

Stick with us, here. This isn't a lame, kind of exciting idea. We're not suggesting the Bronx Zoo because they house 6,000 animals from 650 species, nor because it's one of the largest metropolitan zoos in the world, with 265 acres of park lands and habitats.

No, that's not why we're suggesting you visit the Bronx Zoo on Valentine's Day, even though that's obviously all cool.

The reason we're suggesting you visit is that at the Bronx Zoo, for $10, you can name one of the Bronx Zoo's Madagascar hissing cockroaches after your ex.

The Bronx Zoo will even send that ex a digital certificate. That's fun, right? Even better is that your donation will help the Bronx Zoo protect the misunderstood cockroaches, and fund the food and habitats for a ton of other animals.

So gather a ten dollar bill and some single friends, and get to the Bronx Zoo and have some fun on Valentine's Day.

Okay, Hooters is not our favorite restaurant or anything, but we do think they're having a pretty funny Valentine's Day promotion.

With Hooters' shred your ex campaign, you can visit their site, answer a couple questions, and get 10 free wings. Or, you could just show up in person on the 14th with a picture of your ex.

No, we're not lying, and yes, we're just as excited about the prospect of free wings as you are. All you have to do is shred your ex online, or bring a photo of your ex to shred at your local Hooters.

This is only happening on Valentine's Day, so get out to the Hooters in Midtown with a picture of the ex you loathe the most, and get ready to enjoy some satisfaction alongside your free wings.

You only have until February 7th to buy two-for-one Broadway tickets as part of Broadway Week, so get on it.

Now that we've got that good and said, let's talk about Allegiance. It's about the real life of George Takei. The plot centers around Takei's life through the lens of the Kimura family. It's a look-back through his Japanese-American family's time in an internment camp during World War II.

This is an important story, and an important time in our national consciousness. That said, it's like, the least romantic Broadway play ever. Sure, there's a love story, but it's about Japanese internment.

Also, Allegiance closes on February 14th, so Valentine's Day is like, your last chance to see it. Get your tickets here.

5. See 'How to be Single' (various locations)

We think this movie idea is brilliant. Enough with movies whose plot centers around romance! Enough with this culture that considers anything that isn't about romance isn't worthwhile.

Yes, this is a real departure for Dakota Johnson since her Valentine's Day performance last year was 50 Shades of Grey. That movie was hot, but we're much more into this idea from a moral and intellectual perspective.

So, yeah, go see it with your friends at one of NYC's theaters. Maybe sneak alcohol into the the theater, but you didn't hear that idea from us.

labhnyc And this is how we roll on #valentinesday #therejectionshow

This comedy series is back for Valentine's Day, its "Super Bowl of Rejection Shows," and will put on an evening of the best breakup, heartbreak, and love related performances and stories.

There will be love sings, live music, and a party. Obviously, couples are welcome, but this is really an evening for single people who want to delight in the glee that comes from laughing at heartbreak and rejection.

It'll be at Littlefield in Brooklyn, doors will open at 7 p.m., and the show will start at 8 p.m. There will be beers, there will be cocktails, and there will be lots of laughs and fun.

Jon Friedman, writer, comedian, and producer will host. We're pretty sure he'll have you laughing so hard you won't be able to breathe which is always a good thing. Get your tickets here.

Check out 9 Best Ways for Anyone to Get Lucky in NYC.