Have you ever been handed a Playbill with a program insert announcing a cast change for the day? When I received my program for The View UpStairs, however, the insert didn’t list any rockstar understudies.

Instead, it included a brief history behind the forgotten tragedy that inspired the musical.

In June 1973, an arson attack occurred at the UpStairs Lounge; a gay bar in the French Quarter of New Orleans. Thirty-two people died.

The experience begins well before the cast huddles around a white piano decorated with pictures of Elton John and other gay icons to sing the first number.

The dimly lit tables for select audience members, neon beer signs, and the cardboard cutout of a nude Burt Reynolds, all courtesy of set designer Jason Sherwood, bring a sense of inclusion and safety to the UpStairs Lounge.

Wes — a self-absorbed, millennial fashion designer, and social media star (Jeremy Pope) — buys an abandoned building in New Orleans’ French Quarter and turn it into the clothing store he hoped to open in New York City.

Wes travels to 1973 and befriends the eccentric locals at the UpStairs Lounge spanning two generations of queer history. He quickly falls for Patrick (Taylor Frey), the dashing hustler proving that he’s more than the number of “likes” and followers on social media.

Much of the discussions consist of the generational divide between Wes and everyone else, showing how much or how little has changed since 1973. Surprisingly, the characters from 1973 quickly understand social media, which contradicts the conversations at the core of the show.

Wes’ one-liners referencing Project Runway and how calling someone a ”fierce bitch” is now a compliment provide a pleasant break from what’s otherwise a somber musical.

Each character has a standout number; they sing about how they don’t fit in, and the takeaways from their experiences in an unwelcoming society, but the show could’ve benefitted from more numbers for Nathan Lee Graham.

His character brings this ensemble together and balances the “History 101” feel of the show with his sass, heart, and impeccable comedic timing. 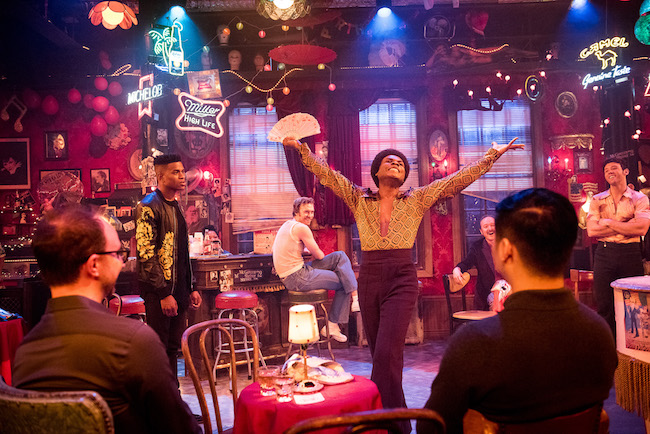 Composer, lyricist, and librettist Max Vernon injects the essence of Stevie Wonder’s songs to his catchy music and lyrics and makes something beautiful out of tragic circumstances.

The View UpStairs is incredibly timely, in wake of recent events.

It flashes us in the face with the parallels between the UpStairs Lounge catastrophe and the massacre at Pulse nightclub in Orlando. We’re facing uncertain times and The View UpStairs also reminds us that milestones like the legalization of gay marriage were once unthinkable.

Vernon wants us to take action despite what has been achieved and pay tribute to the LGBTQ community.

The View UpStairs marks Max Vernon’s Off-Broadway debut and we’ll be on the lookout for his next project.

The View UpStairs will be running at the Lynn Redgrave Theater at Culture Project (45 Bleecker Street) until May 21. Click here for ticket information.