Online, via phone apps, there are several ways that our generation has gotten used to using technology to find love (or simply a little fun); but this latest way of dating will definitely take some getting used to: Virtual Reality dating.

Before any ideas of the movie Her or any other science-fiction type scenario you might be thinking of comes to mind, the concept for this is more simple (yet still complex) than you would think.

I recently attended a party hosted by The League, a fairly exclusive dating app marketed for people who are high-achievers looking to find their match.

But what made this party different from every other singles party hosted this year was what the attendees of the party were eager to try out: a Virtual Reality dating simulation.

While the crowd attending this party were your usual mix of Manhattan or outer-borough singles looking for some love and fun, there were also a few lucky guests who tried out the program The League is testing out for their future Virtual Reality dating system.

The idea, as Bradford explained, is that people, particularly the type of people The League is marketing to (successful, driven, often too busy to date), often don’t want to waste too much time going on a first date, only to realize within the first few minutes that things aren’t going anywhere.

The finalized version The League is planning on bringing out will allow people to create an avatar that actually looks like themselves (no catfishing here), and will allow their date to their voice and interpret their body language– two of the biggest factors in what determines a second date FYI.

I tried out one of the “virtual dates” at the party myself, where I essentially played ‘tennis’ in a way that definitely resembled playing Wii Sports, but in a much more interactive way. 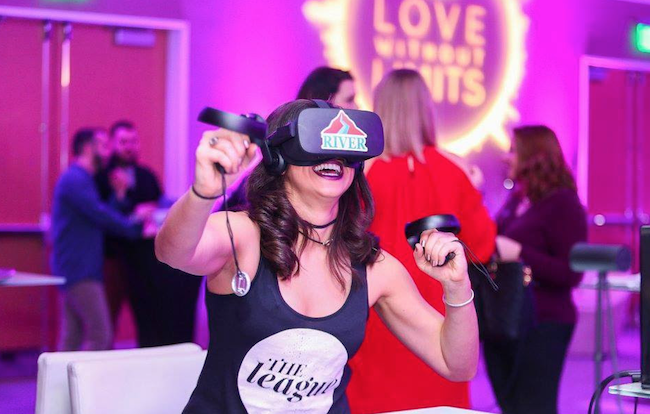 Talking with the creator of The League, Amanda Bradford, I gathered a few details about her plans for the app.

The technology for the system is still in test-mode, Bradford has plans to hopefully have this version of dating up and running by next Valentine’s Day, and offer it to subscribers of The League’s dating app.

Via computer, phone, or Oculus Rift, it looks like the future of dating and technology has plenty in store for singles, New York ones or otherwise, and it will definitely be interesting to find out what we’ll be seeing next.