The Takeover Has Begun: A Second Amazon Bookstore Has Opened in NYC

In NYC, you're bound to see subway riders pass the time on their morning or evening commute by reading.

But these days, you're more likely to watch someone read by swiping a tablet or phone screen. And it makes sense: it's cheaper to buy an e-book and there's nothing extra to carry.

Still, sometimes there's nothing like holding a physical book in your hand, flipping those pages and maybe even dog-earing one or two.

But now you don't have to decide between great e-book prices and the pleasure of feeling paper pages between your fingers.

Amazon just debuted its second brick-and-mortar bookstore this past Monday, located across from the Empire State Building at 7 West 34th St.

The e-commerce giant is shaking up the conventional bookstore concept by focusing on books that only have an Amazon rating of 4.8 stars or more. There's also a "quick read" section that only has titles Kindle users finished in three days or fewer.

And instead of shelving books with binding out, they're arranged cover facing outward. So you can, quite literally, judge your book by its cover.

After opening their first IRL bookstore in Seattle in 2005, Amazon now has a small army of brick-and-mortar stores in Chicago, San Diego and Portland and plans to open more moving forward. 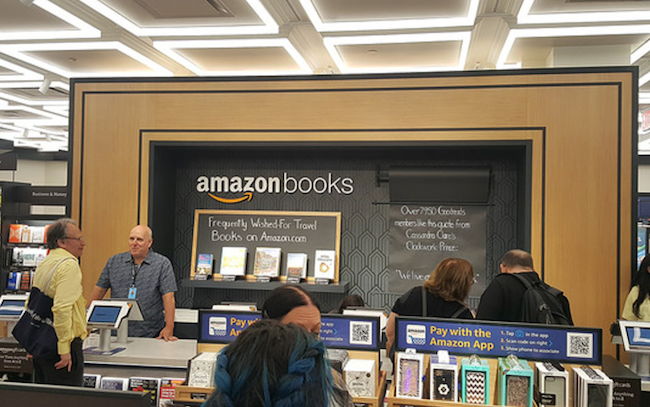 The opening comes just a day after Amazon became the official owner of Whole Foods.

So check out the futuristic new bookstore where the Internet meets real life.