A Taco Tale of Two Boroughs: The Bronx and Manhattan 🌮

In the best of times and in the worst of times, we can always count on tacos. Mexican food is definitely a cuisine popular in America. From Los Angeles to Texas, to New York, there is no shortage of tacos.

New York City is a hub of several diverse cuisines in addition to Mexican, including Italian, Chinese, Japanese, Jewish delis, Puerto Rican, Cuban, French, Jamaican, and much more. This city also has a variety of taco places with ratings in different ranges on Yelp, as well as hidden gems that you can only find if you walk down the street. I think it’s important to focus on the tacos for the joy they bring, the stories they tell, and the culture they introduce. 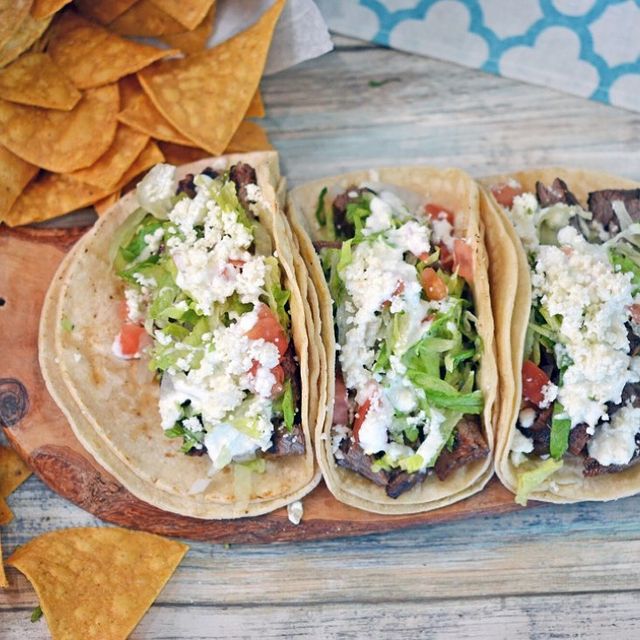 This is the third restaurant in New York of its chain, hence the III in the name. They offer a variety of authentic Mexican dishes, including the classic molè. They say: "The creative blending of diverse ingredients is the key to Mexican cooking, and in the state of Puebla, it is a passion. Puebla is the place where molè poblano was first prepared."

Ordering on Grubhub, I tried their Cochinita Pibil for the first time and it was life-changing. I was excited when I found out they had this dish because I had recently watched the BBQ documentary on Netflix: Chef's Table BBQ, which discusses different forms of BBQ across the world.

One episode talked about this woman in Yucatan making Cochinita Pibil every day and its historical origins. It was interesting to learn about her culture and what this dish meant to her. Eating it added to my level of understanding.

The pork practically melted off of my fork; it was like honey. The plantains created a sweet balance that married the flavors together. The salsa verde was the perfectly spiced cherry on top. The Elote was just as tasty as it was messy.

Needless to say, Fue una fiesta en mi boca! Portion sizes were generous, and it was worth every cent. My only regret was not ordering chips. 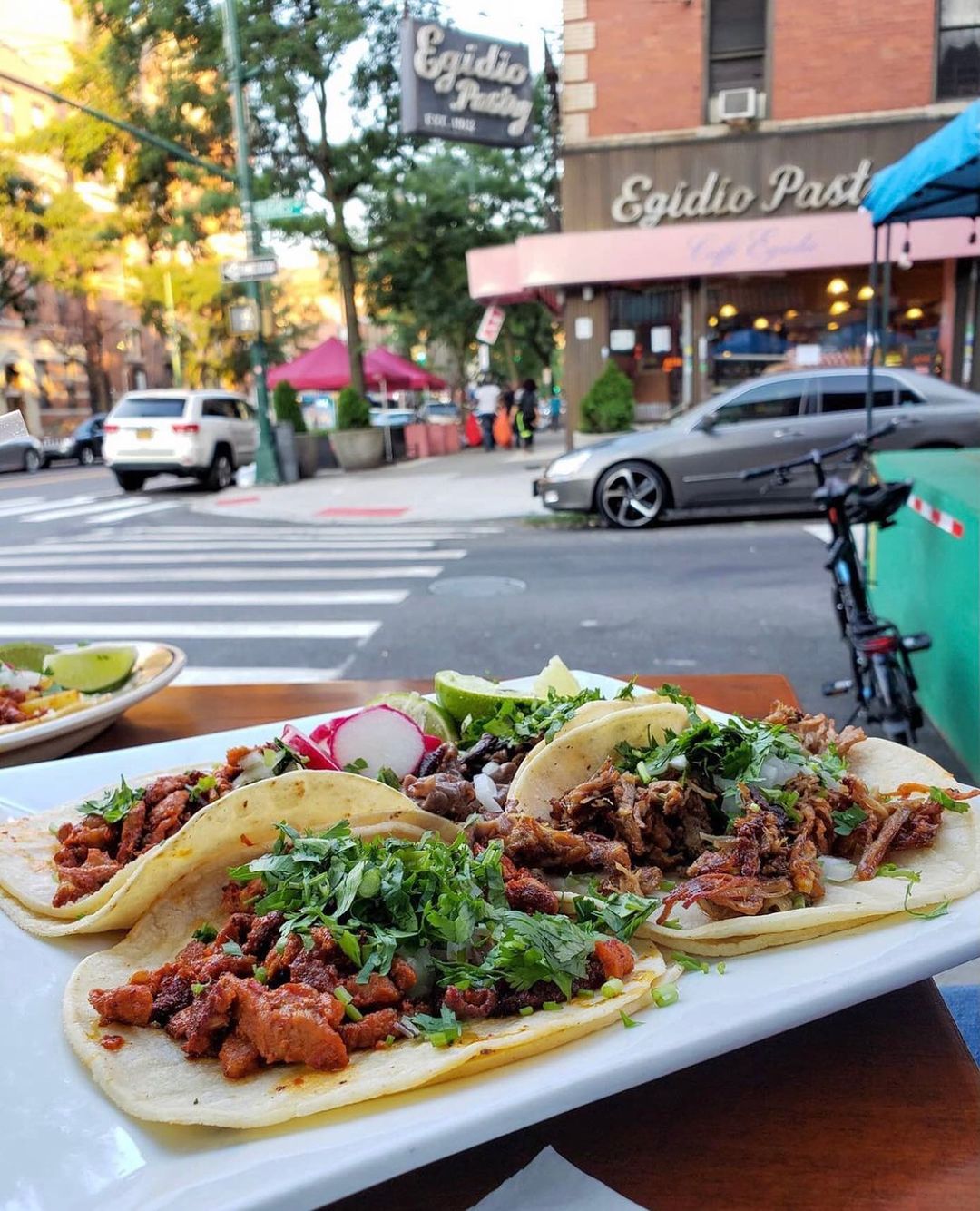 Rancho Estrella transported me back home to Los Angeles. Coming from the San Fernando Valley, I've been desperate to find Mexican cuisine that reminds me of home. Although they pride themselves on authentic Mexican cuisine, they say, "it's our people who have always been our secret ingredient. Treating each other well is our way of life."

This was evident in their excellent service. Everyone who stopped by was extremely attentive and friendly. The beer-battered fish tacos from there also brought me back to the West Coast. One of my favorite fish taco places back home is Rubio's Fish Tacos, and Rancho Estrella's fish tacos tasted just as good.

They offered several options of salsa as well, and the spice level was excellent. For two, it was $35, so I wouldn't complain about the price. The service, combined with the charming atmosphere, reasonable price, and nostalgic food, give this eatery top marks! 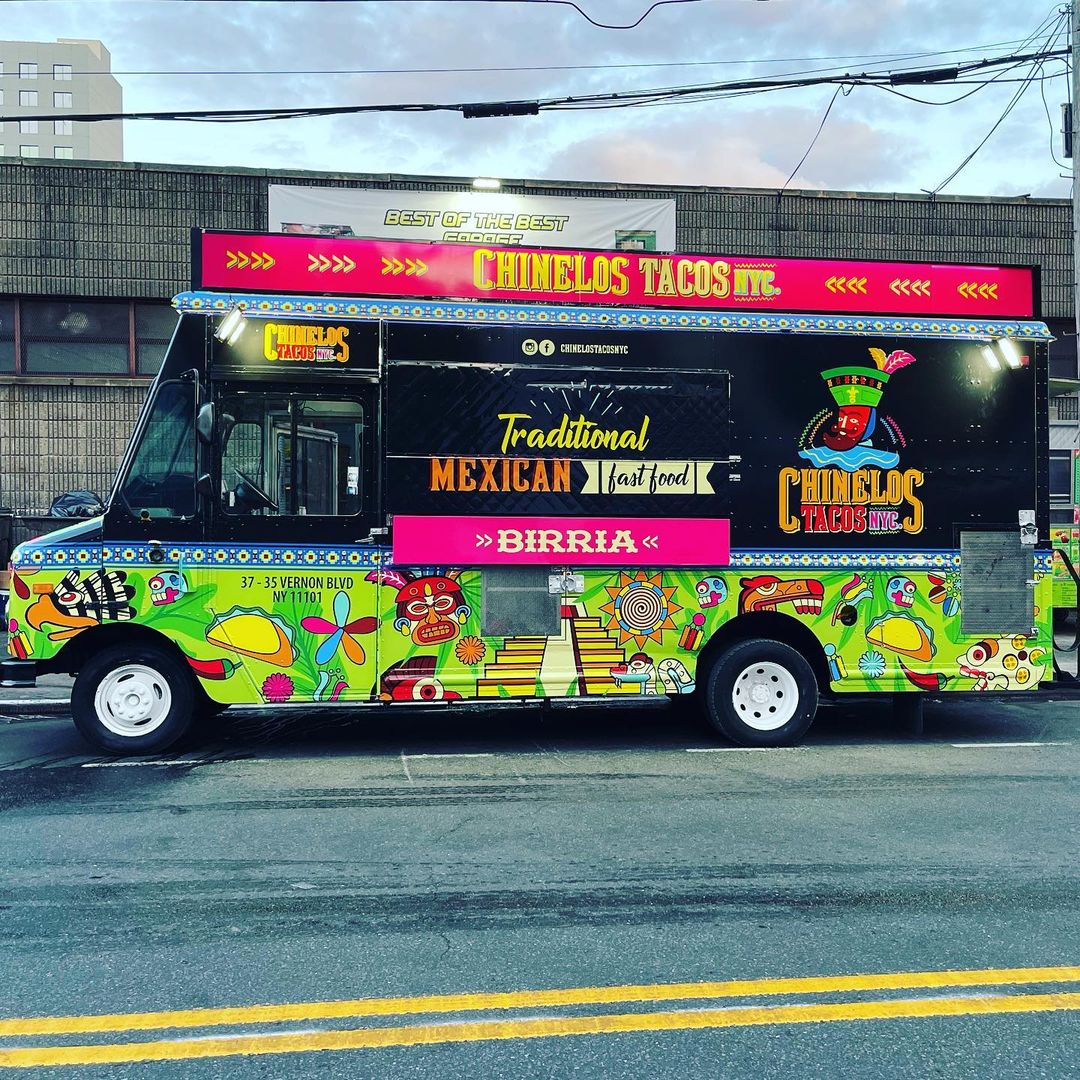 The last tacos I had in the Bronx were from Chinelos Tacos, a food truck that's actually based in Queens. They offer a variety of “fresh food – birria tacos, quesabirria, birria tortas, mulitas, quesadilla, burrito, nachos, and fajita bowl.”

The Birria tacos were excellent. I had a conversation with the owner, Gio Morales, who has been cooking for 15 years. He said he enjoyed working in a truck because he gets to talk to people, hear the music on the street, and create a friendly environment. Although the truck is based in Queens, they also have a truck in the Belmont area. They have been open for ten years.

I got tacos with my friend Saba, who is also from California. She agreed the "service was good, they got the food out quickly, and it was presented nicely. They pack lots of meat into the taco, and although the meat itself didn't have much seasoning, the consomme did." She and I both recommend the combo, which comes with the consomme soup and three tacos. Salsa is also a must. The Consomme had extra meat, so it added a bonus. As Californians, she and I appreciated the small taste of home. 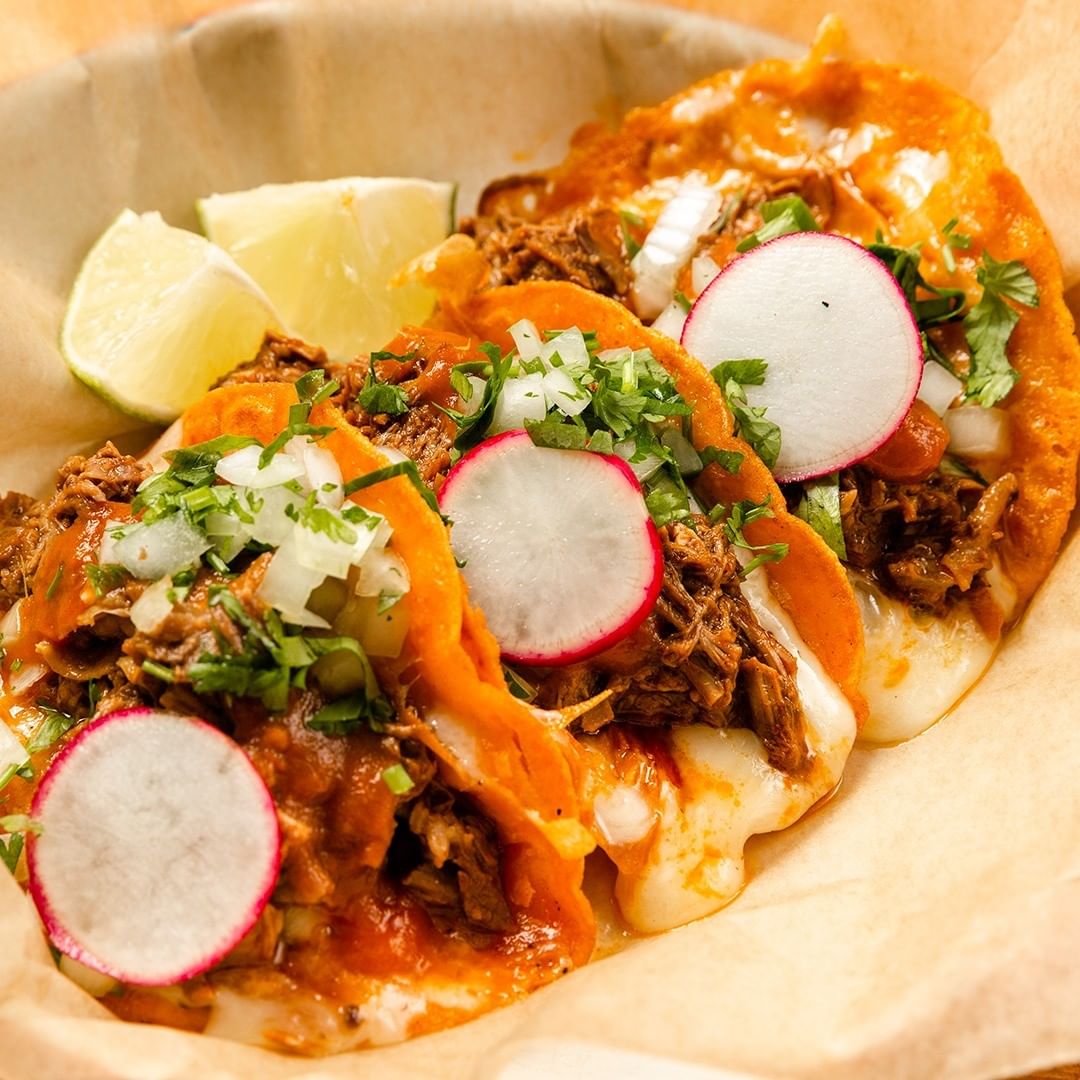 One of the first Mexican restaurants I've tried in Manhattan was Cantina Rooftop. The restaurant gives a spin on modern Mexican cuisine, "weaving in Mexican street food recipes and classic 'Fonda' dishes".

When I stumbled upon it, I was in the city with my family and desperate to satisfy my taco craving. Being that there were five of us, we finished the chips and guac in milliseconds and then kept the rounds coming. We also ordered two bowls of Elote. Three of us got Dorados(fish tacos), my sister Shaine ordered Birria, and my other sister Amanda got Carne Asada. We were all blown away by the quality of the food.

The environment was vivacious, colorful, eye-catching, and loud. From the second you step out of the elevator on the rooftop floor, you stop and stare. The decor gave the essence of Mexico. The place was full of sugar skulls, flowers, and rainbow umbrellas. We had to make a reservation beforehand, and getting to our table took quite a while, but once we sat down, the service was excellent.

Our server was super friendly and chill; it was like talking to someone you've known for years. There was also a DJ who satisfied almost every one of our requests. It was slightly chilly since it was outside on the roof, but the margaritas took care of that.

A pitcher of unflavored margarita costs $65 and $75 for a flavored one, which was a little overpriced for what it was. The exact price for the pitcher is also in the extremely fine print. However, the food was excellent and had a reasonable price.

My only real complaint was the exit route. When you enter, you take an elevator to the 4th floor, but you take the stairs down when you exit. These stairs are steep, especially if you've been enjoying those margaritas. 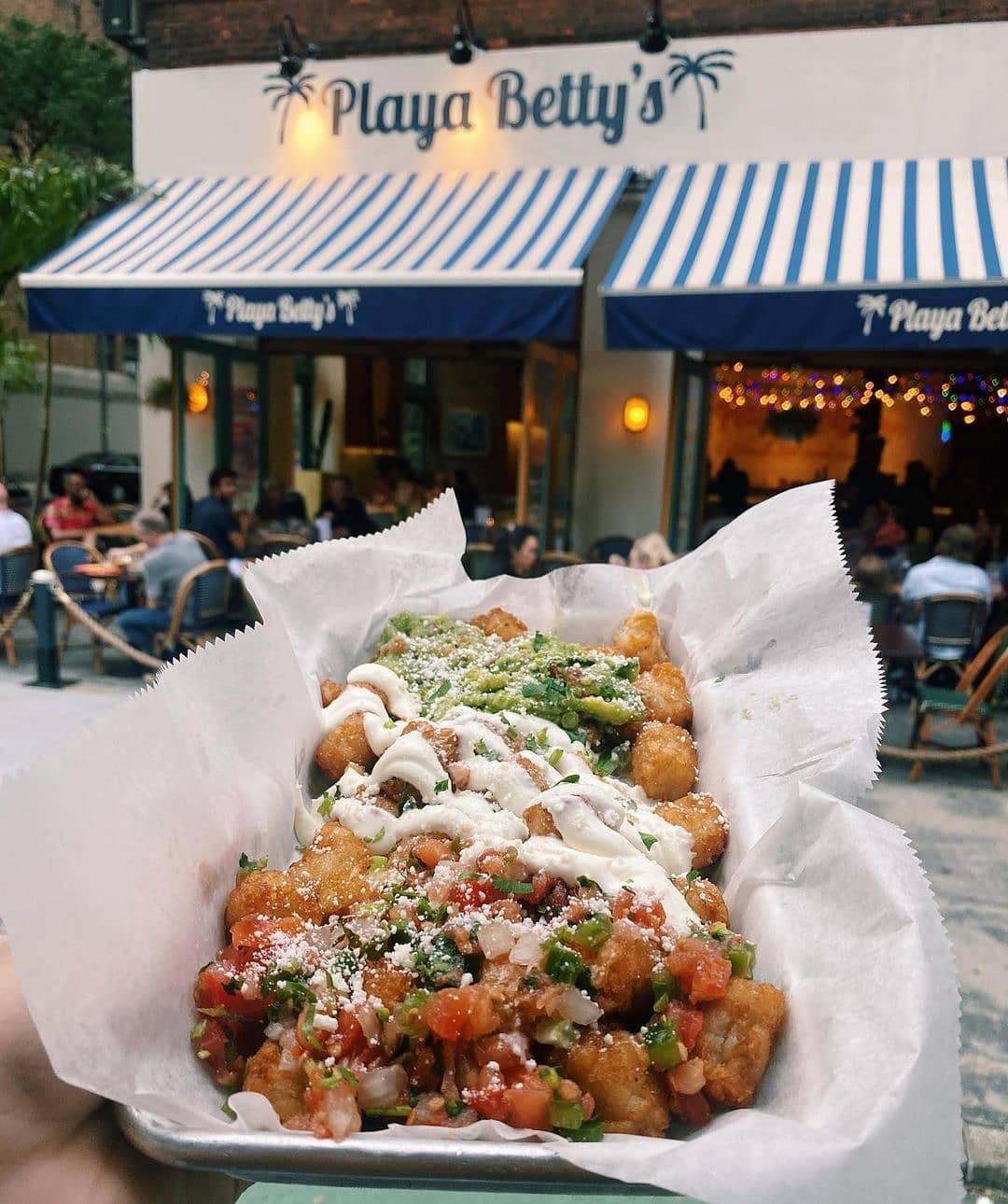 Playa Betty's attempts to bring a taste from California as well. They represent "California-style beach food". More specifically, they try to capture "the whole coast of California; from a Mendocino County food truck to Los Angeles health food to the best of Baja California!"

My mom enjoyed beer-battered fish tacos, which were on the smaller side, and ordered the Caesar Chavez Salad appetizer. She said the food was pretty good and the servers were attentive. She didn't need a reservation which eased her experience. They also had a good selection of beer. The decor gave 60s Beach Shack vibes and the price was typical for eating out in New York. 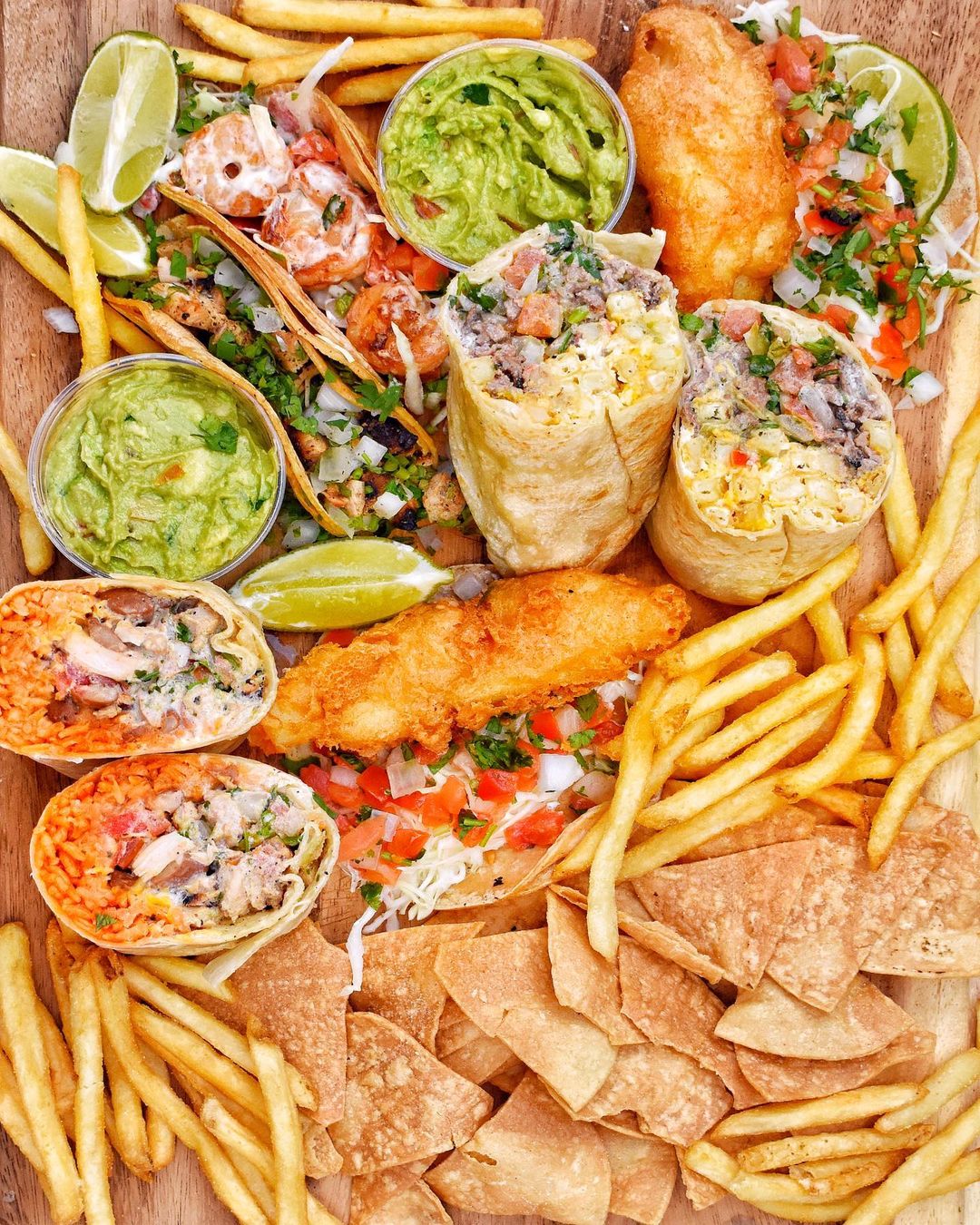 The last meal I had in Manhattan was from Summer Salt near Madison Square Park. Summer Salt also brings a California-Mexican cuisine, as the founder is "a So-Cal-raised, food-, fishing- and Baja- obsessive, ever on the hunt for better beach food. He has tried every taco, burrito, gordita, flauta, and salsa from coast to coast and San Clemente to Tijuana."

The style of the restaurant is "do-it-yourself" like Chipotle or Subway, permitting you to build your own tacos. The employees there were very welcoming and friendly. I ordered a beer-battered fish taco and the pan-seared adobo shrimp. Both tacos did not disappoint.

They had three different salsas ranging from mild to hot, and each had an individual flavor and balanced levels of sweetness and spiciness. The hot salsa went well with the chips and added more flavor to the fish tacos. The restaurant itself had a beach and nautical theme, with surfboards hanging on the walls. It reminded me of beach-themed restaurants back home.

All in all, I would recommend all these restaurants with full enthusiasm. Each restaurant offered a unique experience, clever environments, and satisfactory service. Most importantly, delicious tacos.

I'd say my favorite place according to my taco ratings was Rancho Estrella on 187th St in the Bronx. This establishment reminded me of home the most, and the employees were extremely kind and attentive.

However, whichever restaurant you decide to go to, the tacos are totally worth trying. Enjoy your taco-tasting adventure to the fullest!