Mario, the classic everyman hero of video games, acts as a man of many hats: plumber, tennis pro, racer, and doctor.

Now we can add 'maze model' to his list of credentials.

Gothamist reported that the Nintendo superstar, along with his usual entourage of Luigi, Yoshi, Peach, and Toad, is the subject of a New York maze.

Staughton Farm, in Newark Valley, has designed their annual maze by incorporating images of the core cast of Super Mario Bros.

Which, when you look at it from an aerial perspective, is pretty sweet. And also super-tough to do.

Deb Staughton and her husband Tim spoke to ABC News about this dope endeavor, and Tim said that the process involves “a lot of math.”

Breaking the corn field down into grids and meticulously clearing the corn to sharpen up the images? Yeah, that’s pretty intense.

Totally related fun fact: Mario’s first appearance (in Donkey Kong) was initially going to have players controlling Mario in an attempt to escape from a maze.

So grab your cap, strap up your overalls, and take the nearest warp pipe to Staughton Farm when the maze opens on September 17th. 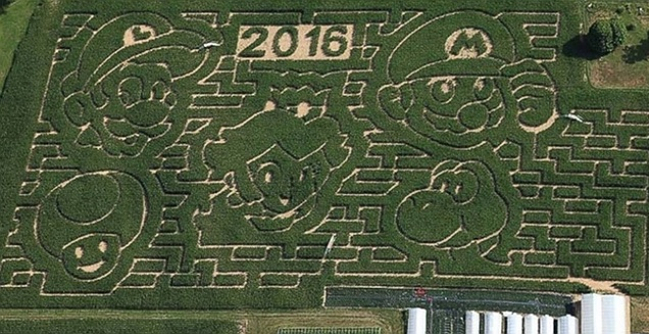 They’ll keep the maze up until October 31st, and if you really wanted to win Halloween, dress up as the Mario crew when you and your friends visit.