Just about everything! With its rich history in music and art, this place also has some dope eateries to check out!

Harlem is eminent for its foundation of jazz, art, and other cultural innovations, and was home to a largely-diversified group of people from various racial and ethnic backgrounds. It was believed that Harlem in the late 1800s would only be accessible to city dwellers of Lower Manhattan, but also invited people from Washington Heights, the Bronx, and other northern parts.

In the early 20th century, the Harlem Renaissance is what brightened this wonderful town, bringing it to flourish and thrive through the work of many artists, such as Langston Hughes and Aaron Douglas. Once the 1929 recession hit, poverty-struck Harlem full in the face; riots against racism and slim opportunities to participate in wars rocked Harlem back and forth in the fight against discrimination.

Now, Harlem is going through a new renaissance of economic advancement and cultural maintenance - it was ensured that the roots of its culture wouldn’t fade, which is why modern day Harlem attracts visitors from all over to learn more about the history and development it progressed through.

Sliced brought in the famed street artist, Gumshoe, who has been commissioned in the World Trade Center, as well as Rammer Martínez Sánchez, whose work can be seen across Harlem and the Bronx.

These are only a few of their specialties. Head on over to Sliced if you’re in the mood for a unique pie! 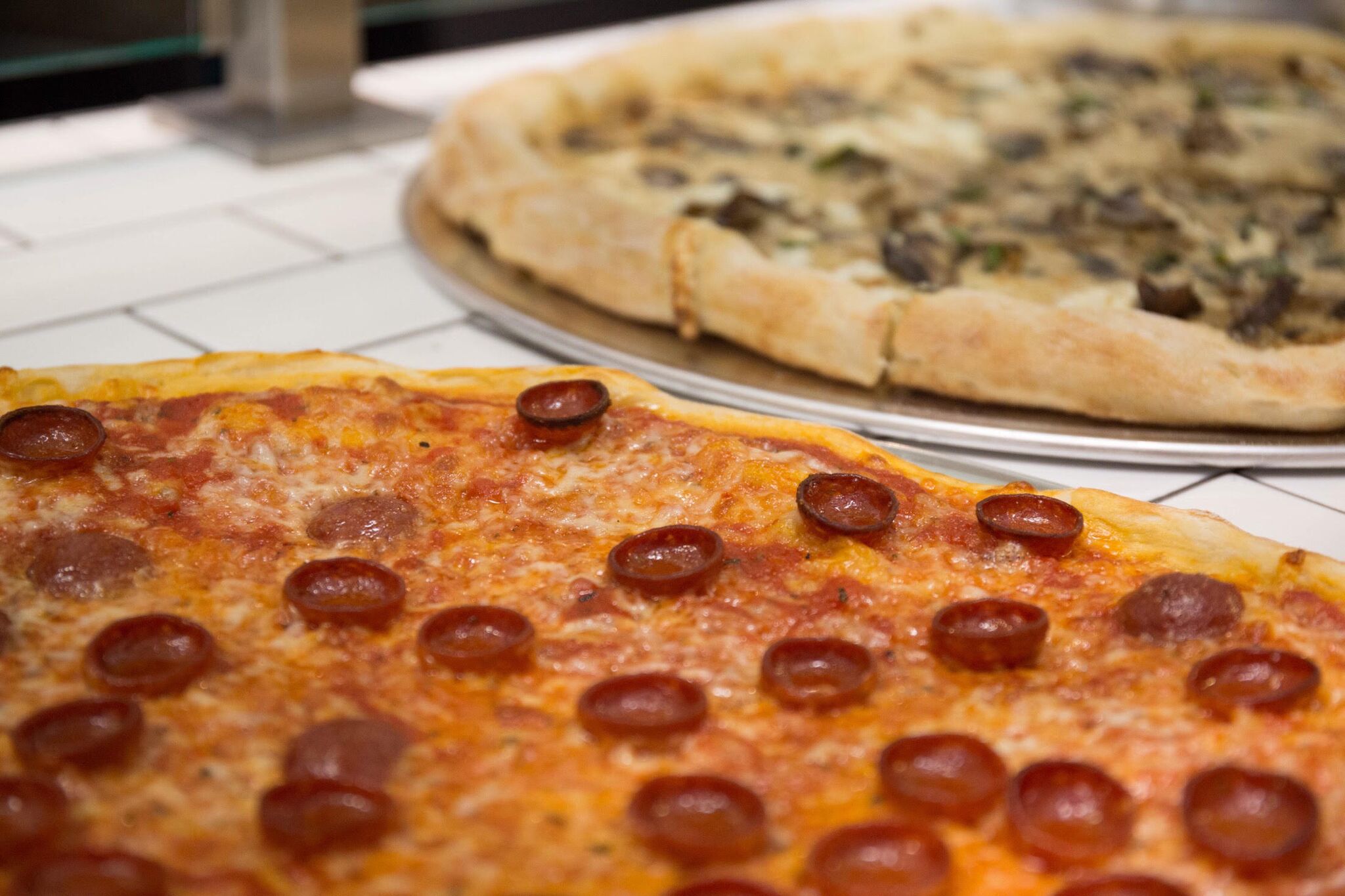 LoLo's Seafood Shack serves up a variety of seafood from the coastal comfort foods of the Cape like sauced shrimp to Caribbean street eats like crunchy conch fritters.

Alongside their Beach Bar, LoLo’s serves up their Caribbean cuisine, including baskets, like the Salmon Shrimp Broccoli Basket, or their Fish Fry Basket, sandwiches, such as their “Crispy ‘Shark’ Bake,” veggie sides, and their “Steampot Combos,” including their “Spicy Crawfish Shrimp Set.”

If you’re looking for a Caribbean getaway, but can’t take a flight out just yet, head on a train to Harlem and enjoy a bite at LoLo’s! 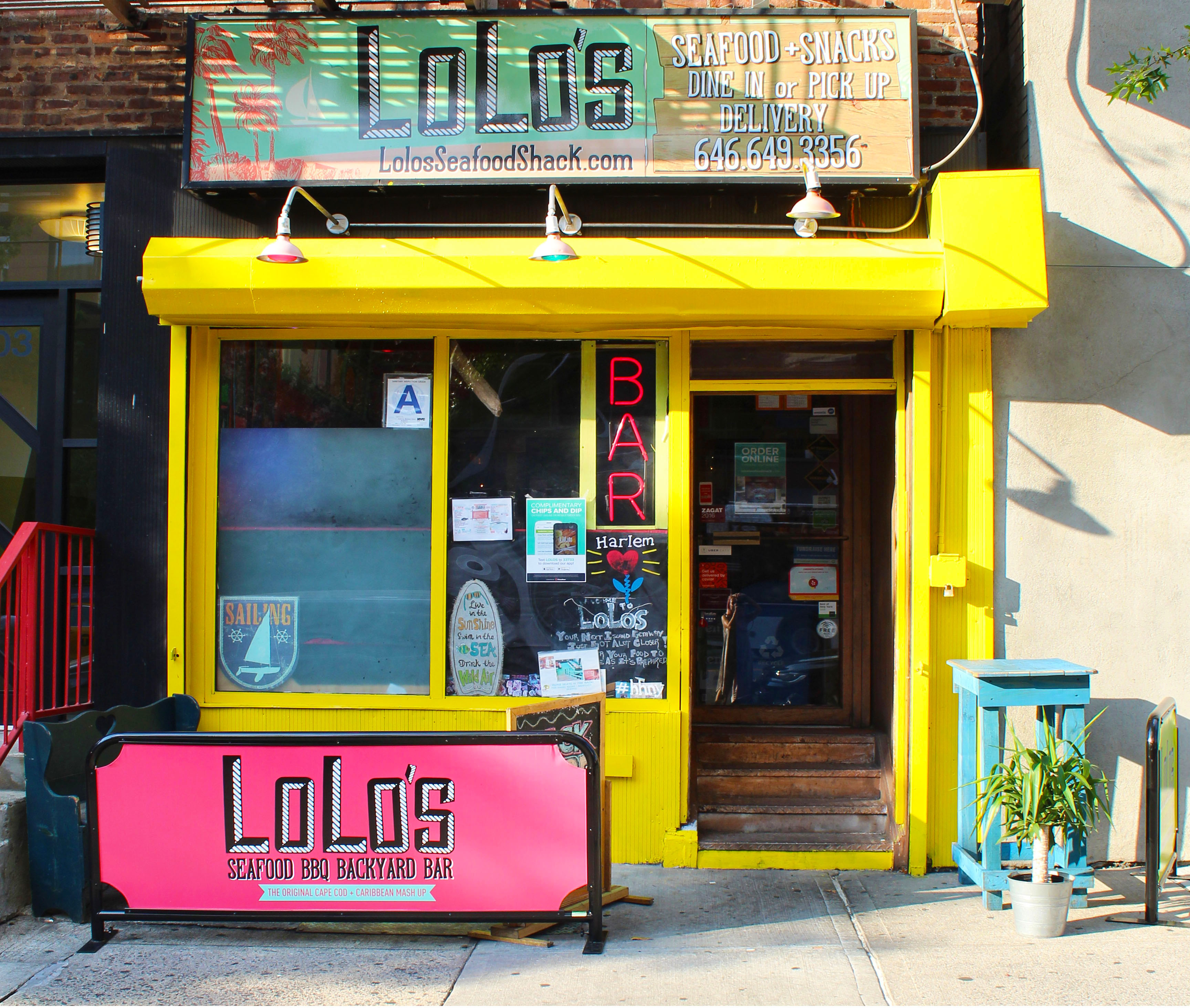 On a lunch break, or heading out for something to eat for the day? Hot and juicy burgers are the perfect summer snack! So if you’re in Harlem or simply trying to find a new place to eat, visit the Harlem Burger Co! The place that hosted the Harlem Globetrotters with a special performance for children, Harlem Burger Co. is a fantastic spot to kick back and enjoy one of their burgers, like the “Westside Cowgirl” (Swiss, bacon, Tempura onion, and BBQ sauce), or the “El Barrio,” (Guacamole, tortilla, lettuce, and Oaxaca).

And if you’re not a burger person, they have a wide selection of sandwiches, known for their all natural chicken and pork ingredients, their milkshakes, fries, and even a hot dog menu! Harlem Burger Co. makes it a point to serve to everyone of different tastes! 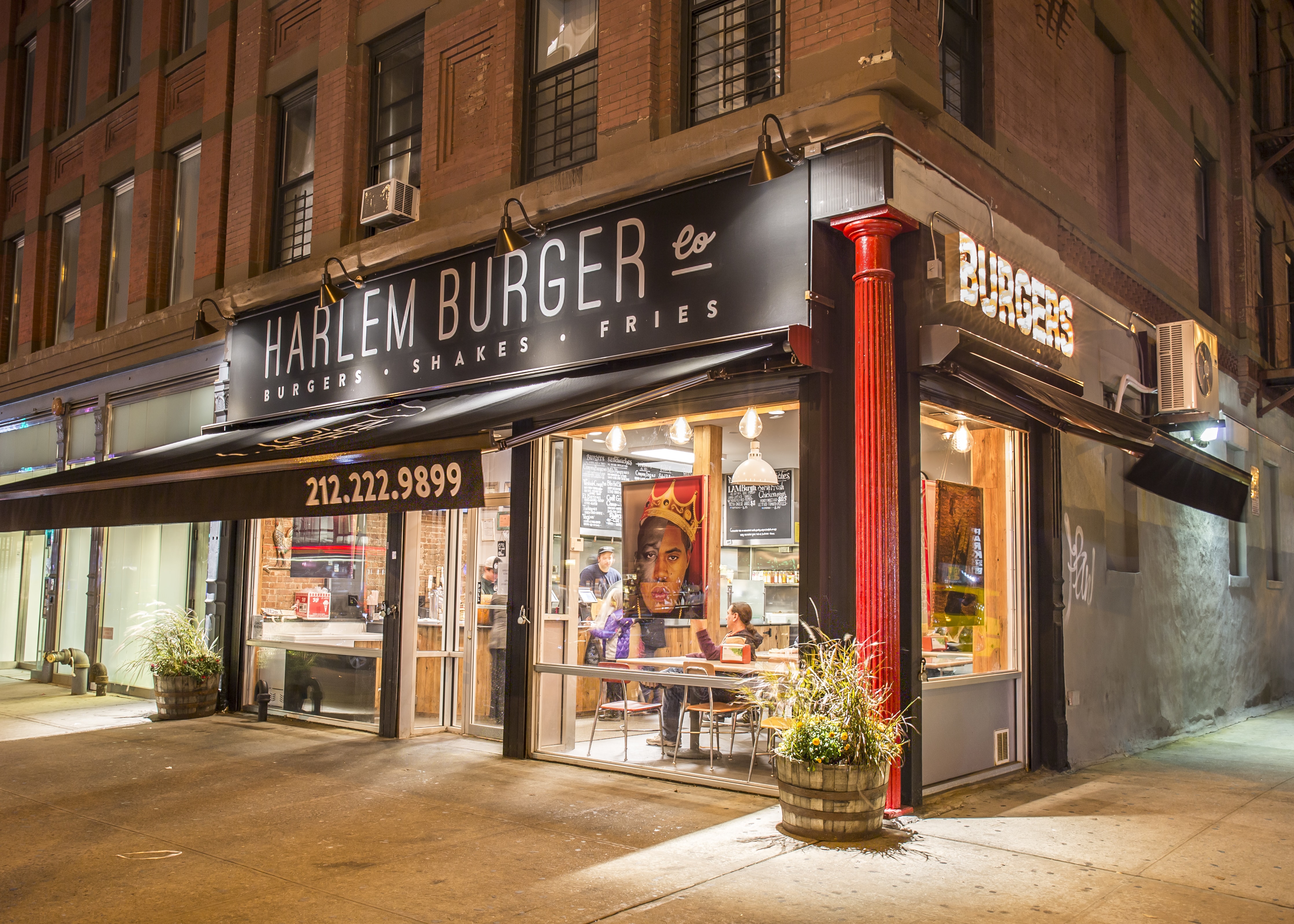 With its memo to “celebrate the roots of American cuisine,” Red Rooster Harlem offers party reservations and live music while you eat, in addition to their playlist of “sweet old music” including “Amazing Grace,” and “Honey in Harlem.”

Entrees and snacks, such as the “Firepit BBQ Chicken,” and their “Ol’ Dirty Porcini Pasta,” Red Rooster serves a variety of big and small dishes that commemorate the good ol’-fashioned American way of eating!

Chéri has the ONLY white glove delivery service in all of NYC, a chic delivery service for the surrounding area. With its menu of appetizers “Soupe Provencale,” Pate de Champagne,” and “Duck Rilletes,” and entrees, such as “Filet de Poulet sauce au citron,” and the “Filet Mignon de porc,” this brilliant restaurant will take you away on a sweet escape with its uniquely-served French dishes. 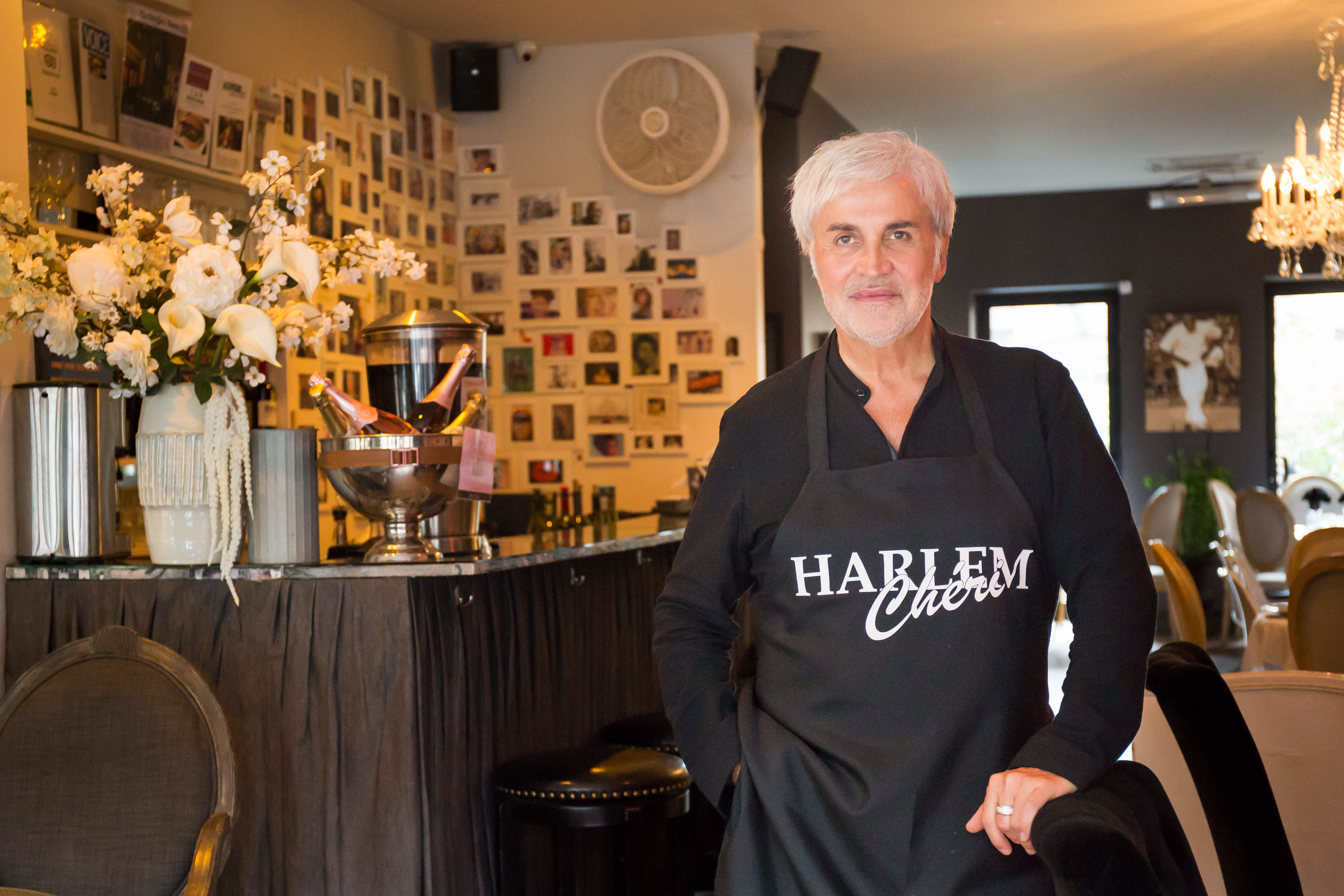 Mentioned for its last old-styled Rugelach baker in Harlem, Lee’s Lee’s is a small business that kicks butt in serving the best baked traditional Jewish pastry in town! From creating and perfecting his own rugelach recipes, Lee later constructed what is now the location's menu.

Also baking non-rugelach goods, this small bakery in Harlem welcomes you to a different side of tradition - baking!

Not only does this sweet lil’ place offer their homemade, seasonal rotations of ice cream flavors, but they also hold events teaching how to craft their product!

From birthday parties to school field trips, the little ones can learn how to make ice cream! What better way to spend the day than learning how to actually make ice cream? Not many even think about what they’re eating, so check out this Sugar Hills’ offer!

But if you’re into trying new and crazy combinations of ice cream, these guys serve “Roasted Corn and Jalapeno” ice cream, “Blueberry Cheesecake,” “Salted Caramel Crunch,” and Strawberry Basil!” And these are only a couple of the flavors they have to offer!

We’ll be over at Sugar Hills to cool off and enjoy some well-deserved ice cream if you’d like to join us.

An artisanal and Southern-style location, this bakery gives you the chance to absorb that old-school Southern vibe!

With their pies, cobblers, cookies, puddings, and cheesecakes, Sweet Chef can hook you up with some of the sweetest plates you can imagine! Just to mention a few of what they’ve got, there’s the Sweet Potato, Apple, Blueberry, Cherry Crumble, and Southern Chocolate Pecan Pies, as well as their Mixed Berry Cobbler and German Chocolate Cookie, anyone with an extreme sweet tooth will be walking into Heaven when they visit here!

If you love a good cigar in the middle or evening of your day, kick back at the Cigar Room. 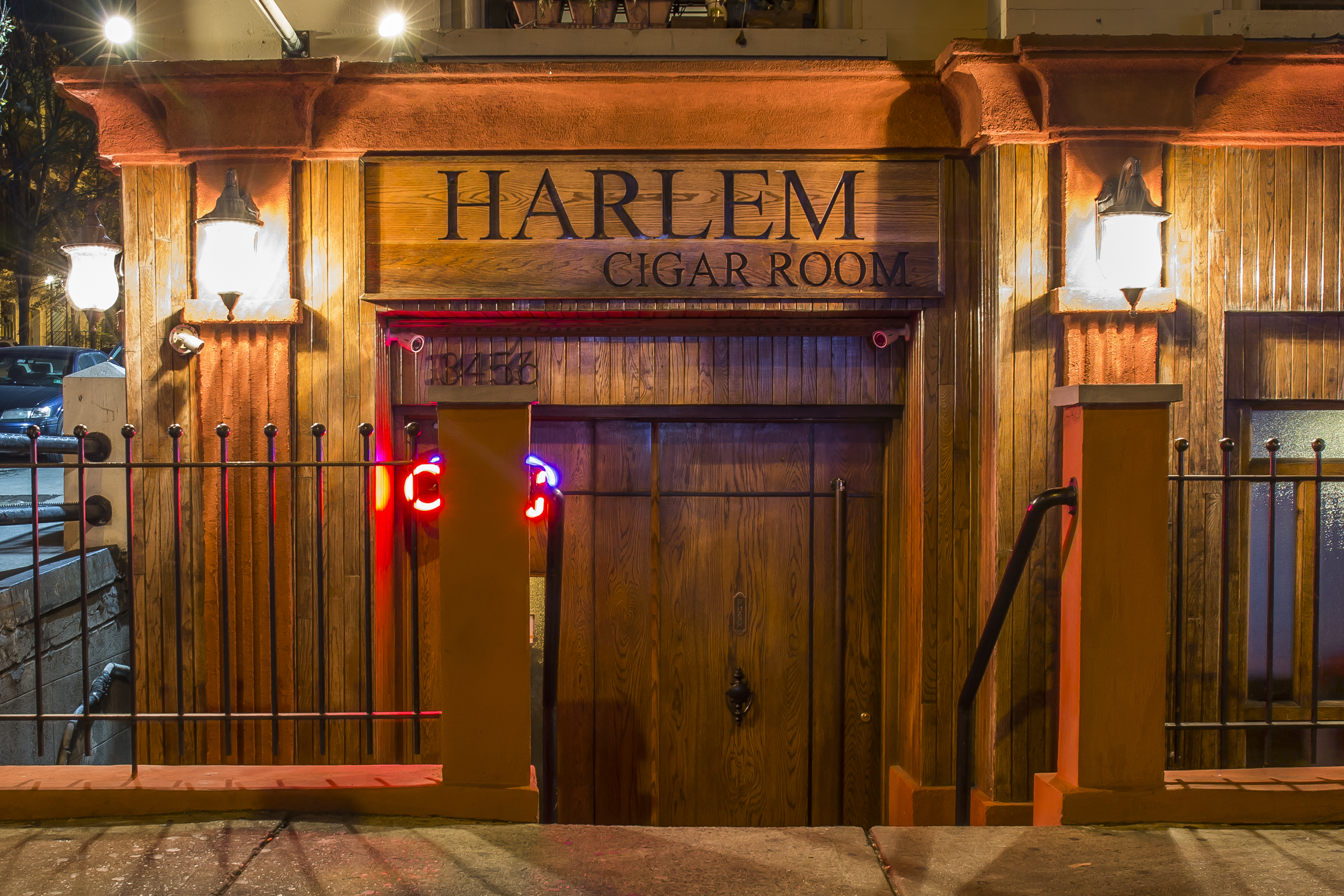 Its title acting as a nod towards 19th-century history of slavery and the opening of the underground speakeasy, 67 Orange Street serves up their own gin and awesome foods to the amazing location of Harlem.

Ranging from “Red Rosemary’s Gin” to the “Scottish Cartwheel,” their menu of drinks will definitely give you a nice kickstart into your night-out. But we can’t forget what they have to eat: “Truffle and Parm Shakes” and nachos fill up their appetizers part of the menu, while their main dishes include “Lobster and Shrimp Mac N’ Cheese!”

If that doesn’t start your engines, we don’t know what will when it comes to this simple yet incredible spot!

Its signature dishes serving everyone in Harlem, the Moca Lounge invites everyone to their “smooth, sensual, and sexy” vibe in the music and atmosphere they built. With interesting art and comfortable seating, if you’re looking for some good food and a chance to unwind, this is the place to go!

The “Blue Mountain Jerk Wings,” and their “Moca Turkey Burger Sliders” are only two of their tasteful meals they’ve got for you!

While you’re out on the town with some friends or colleagues, be sure to pass through the Moca Lounge for the perfect opportunity to relax and eat!

Harlem is a respectable, educational, and entertaining area to visit, but if you need - not just want, but NEED - some comfort food, high-end dishes, old-fashioned baked goods, or even just a simple place to smoke a cigar, Harlem is - hands down - the place to hang out in.