The New York City subway system is old, outdated, and, in many cases, far inferior to similar systems around the world.

Unfortunately for those of us who ride the subway day-in and day-out, the recently announced so-called improvements won't address the crux of the issues regarding the subways: ridership rates pushing the subways' working capacity.

So how can the MTA safely transport thousands of riders a day?

Apparently, the answer is relatively simple: introduce open subway cars with open gangways, allowing for an increased capacity by 8-10% per train.

These open cars were met with some pretty intense opinions when we first brought them to you in December, but considering Governor Cuomo's new plan to upgrade technolgy rather than increase productivity of trains, we're thinking this plan might just be the best we're going to get.

According to Benjamin Kabak of Second Avenue Sagas, MTA sources told him that the "agency fears at doing something viewed by New Yorkers as 'different' even if it exists elsewhere and some manageable engineering concerns about these types of cars' ability to handle tight curves."

These cars aren't new technology, not even to NYC. The subway trains of the early 20th century had open gangways, but have altered to the trains we have today.

So let's just lay out our thoughts for the pros and cons of these trains before we jump to conclusions.

Yes, the stink of the NYC underground will have free range to travel throughout the entirety of the train, rather than being confined to a single car.

Showtime will be unavoidable, regardless of your location on the train.

It seems as if these trains might have less seats, which could allow for more standing room, but still... #lazy. We're hoping that this will lead to more people actually giving those coveted seats to those who need them (elders, injured, pregnant, etc.). 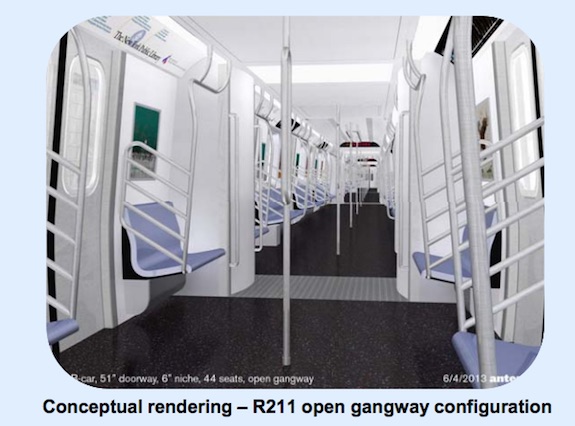 A 10% increase in capacity could mean that you're either going to be packed in with even more people than the current cars, or you'll have more space to roam. Plus, without the gangways separating cars, people will likely move to disperse the crowd throughout the train rather than just in one car.

Whatever your opinions of these trains, there's a pretty distinct possibility that you won't ever get to see them. The MTA (like everything else they do) believes that these designs will take time to implement.

Even if these trains are created by 2020, the design may not be feasible for the current tracks. Plus, with 56% of the trains younger than 15 years old, the orders for new trains won't include open gangway sets, meaning the following order for new trains won't arrive until the late 2020s.

An all-open-gangway system will likely not be completed until the mid-2070s, by which time, most of us millennials will be either dead, or in our ripe old age telling our grandchildren about the time back in the day where our cellphones didn't work underground... who knows, they still might not then either.

Check out Queens Is a Snowy, Unplowed Mess... But 'Not Forgotten'.