Hello? Spring? Is That You? We Might Actually See 70-Degree Weather in NYC This Weekend!

No joke, but Mother Nature's mood swings are giving us some major whiplash.

Just in time for the BK 15, Smorgasburg, the multiple Bernie rallies, and the second weekend of the LIC Flea, temperatures in NYC could hit as high as 73˚F, but feel as hot as 77˚F.

On Saturday, head to one of these incredible rooftop bars for a beer to take in the 63˚F sunny day, or hit up the LIC Flea to search for some vintage finds. By Sunday, it might feel a bit more like summertime in the city, with temperatures around 73˚F, with the potential to feel like 77˚F.

To be honest, we're pretty sure we'll encounter someone lounging in a bathing suit this weekend to catch some rays, but we're not so sure our beach bodies are on point yet.

We know we're going to have a rough time heading back to the office on Monday with temperatures forecasted at 73˚F and sunny.

So, we'll try to put on a brave face at the end of the weekend, but until then it's suns-out-guns-out.

Then again, Mother Nature is not someone who we're ready to trust just yet.

She could flip her sh*t in a moment. So what do you do? You use the absolute best weather update app around: Poncho.

Poncho’s the most adorable cat in a yellow raincoat making the most out of bad news by delivering it cutely.

Poncho is hands-down the best way to check weather from the moment it wakes you up with a weather-based alarm to the minute before you leave work for the evening.

We went from slush to sun real quick. While that kind of bipolar bullsh*t isn't exactly fun, we'll just have to take it. 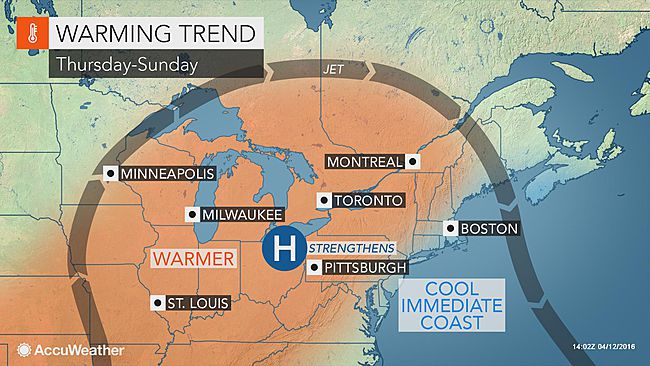 Check out Vampire Weekend, Grizzly Bear, and TV on the Radio All Feeling the Bern This Weekend.