South Street Seaport's Getting a Brand Spankin' New Luxe Movie Theater... But It's a Little Much

Sure, we have our share of movie theaters that it's probably for the best we never see the floor with the lights on, but New York City does have some dope places to catch a film.

The cinematic experience has evolved from artfully decorated thematic theaters where our now classic films were screened, to the somewhat dingy experience we expect from hitting up a chain theater, and now, a new generation of swanky theaters is coming to tear us away from our Netflix queues.

Considering how much money going to a chain theater can rack up if you want some over-salted under-buttered popcorn, doesn't a luxe movie experience sound so much nicer?

According to Time Out, iPic Fulton Market will feature eight 500 seat theaters– premium seats will go for $14 (which is literally cheaper than some NYC chains, FTW) and premium plus seats for $29.

The major difference between premium and premium plus seems to be premium plus guests receive unlimited popcorn and a full for-pay dinner menu of contemporary American food that can be ordered in-movie.

Your food would then be delivered by "ninja trained waitresses" that somersault (we can only assume) down the aisles with orders during your movie.

They also get a button to summon aforementioned ninja waitresses, which sounds kind of cool but also pretty extra.

The seats for premium plus movie-goers are also leather and come with pillows and blankets, while we're on things that are extra AF. Damn, is it time to switch back to spelling it theatre? 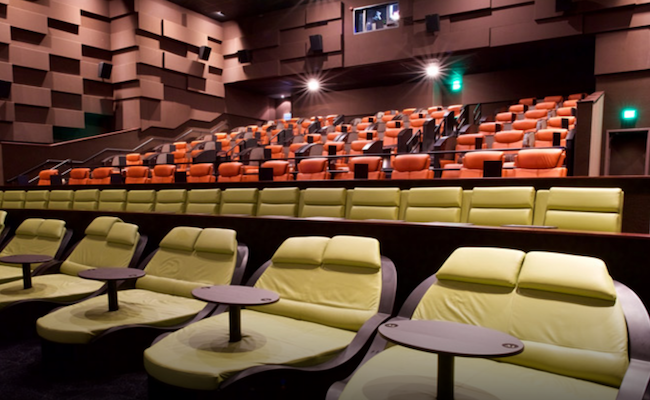 Despite all this *gesticulates wildly,* we're questioning if $29 is worth being able to leave your sweater at home when you can just pay $14 for premium-without-plus.

Just saying, while we understand it must be very difficult for lowly premium guests to carry in their own concessions with their own two hands, we have a feeling that in a theater as nice as this one, the premium seats won't exactly be cardboard boxes propped up in the back.

Mostly, the premium plus option sounds like something for an especially classy night out every once in a while, or a seriously over-achieving first date. We're not kidding, look at these seats.