Get an Inside Look at Simo Pizza, the Quickest Cooked Pizza You'll Ever Have 🍕⏲😋 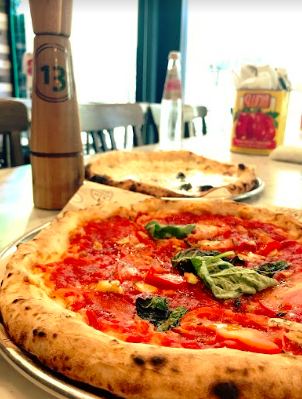 New York City is definitely not short on pizza places. I mean, if it weren’t known as the Big Apple, it would probably be the Big Pizza.

Actually, someone should suggest the change.

Despite the surplus of pizza joints, there is still only a handful that really stand-out. Not that most aren’t good, but the majority are interchangeable.

Luzzos and DiFara are among some of the no slice locales that catch tourist's eye, and others have word of mouth, but until now none have churned them out fresh in 90 seconds.

SIMÒ is a new pizzeria located in the Meatpacking district at 90-92 Gansevoort Street and is open from 11 AM-11 PM. It opened up just in time for summer. Pizza by the water—never a bad idea.

SIMÒ, short for the owner’s name, Simone, is from the same team at Rossopomodoro in the West Village. Its concept is simple, yet genius. Choose a pie and they make it from scratch and cook it in an oven, but the catch is, it’s done in about 90 seconds. 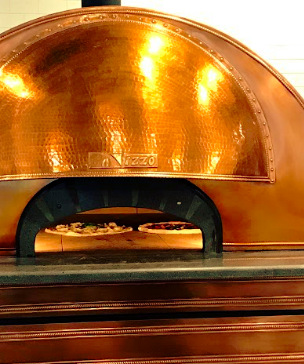 I have to admit, I was skeptical of how well that could work. As a fan of crispy crust, 90 seconds didn’t seem like an awful lot of time to create a crunch.

But I’m happy to admit that the pizza was damn good.

We were treated to one of the Margarita pies and one Cacio e Pepe (aka a white pie), I’d say we waited eagerly, but there truly wasn’t much waiting.

Although after they rolled out the dough, added the toppings and quickly cooked our pizza, I did speed through pictures to get to the tasting part. 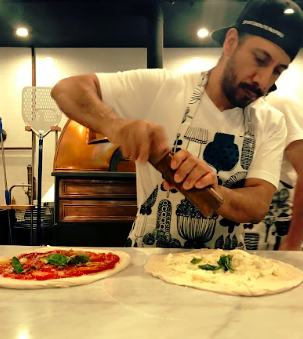 The marinara was covered in the perfect amount of sauce, and basil, and though the crunch wasn’t significant, it was far from doughy and had a near perfect chew to it. I’m not usually one for white pizzas either, but this one made with mozzarella and pecorino was perfectly salty. 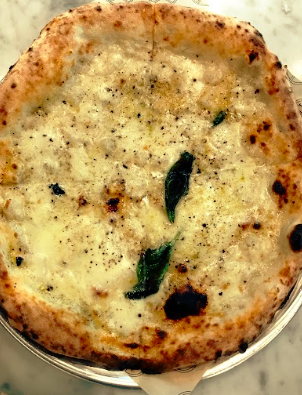 Also on the menu are several other varieties of pies, salads, including a twist on a Caprese that I plan to go back and try, and a great minimal list of drinks.

Be prepared to pay with a card as the place is completely cashless. When all is done, you can even head to the Whitney across the street to make a night of it.