Much of Brooklyn is a mystery to both New Yorkers across the river and the world at large. For instance, why do so many people dress like high-class homeless for a price tag that would leave most of us nearly as broke?

Or, why is the cost of living in Williamsburg so absurd? Why does it feel like the rate of gentrification is much more rapid than anywhere else across the five boroughs? Is the Gowanus Canal eternally doomed to being a hot, toxic mess?

It's safe to assume that many of these Brooklyn mysteries will remain unsolved. One thing not lacking understanding though, is the newest sculpture planned for Brooklyn Bridge Park's Pier 6.

According to the Public Art Fund, from May 4th until October 23rd, Turner Prize-winning artist Martin Creed's newest sculpture will literally read, "UNDERSTANDING."

Bright neon red, UNDERSTANDING (otherwise known as Work No. 2630) will overlook the East River rotating at different speeds through a program developed by Creed himself.

It will be visible from nearby Brooklyn, Lower Manhattan, the river, and the Brooklyn Bridge itself.

While the complexities of Brooklynites themselves are rather mysterious, the enthusiasm for the concept is well pronounced.

Calling Creed "a poet of the everyday," Public Art Fund Director & Chief Curator Nicholas Baume seems excited with the prospects of not only the work itself, but the intricacies of its message, acknowledging that "understanding" is a highly complex word. We would agree.

"Both literally and figuratively, Creed offers us a new vantage point to see the world," he said. "But is this a celebration of understanding or a challenge to us to understand more? Either way, Martin Creed’s disarming eloquence captures our imagination.” 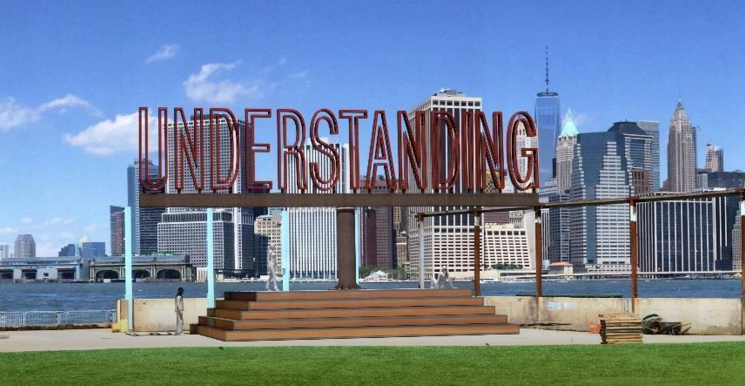 As for solving the deeper mysteries of Brooklyn or even the complexities of the human condition, well, Creed's work won't exactly solve that for us, but the symbolism itself is a welcome reprieve from the vitriolic goulash the world at large seems embattled with.

So, here's to UNDERSTANDING, and here's to hopefully understanding more of what that all means.

Check out 11 Most Famous Pieces of Museum Art You Need to Cross Off Your NYC Bucket List.