Time for a road trip from New York City to London?

Don't worry about those pesky oceans... we'll just take the long way 'round.

At least, that's what the head of Russian Railways has proposed.

According to the Siberian Times, Vladimir Yakunin proposed a high-speed plan titled the Trans-Eurasian belt Development (TEPR) to span from London to New York City during a meeting of the Russian Academy of Science.

Apart from a railroad system, he proposed construction of major roads alongside the rails, along with gas and oil pipelines, and facilities for electricity and water supplies.

CNN reports that the plan would connect the eastern border of Russia with Alaska, bridging a sliver of the Bering Sea which parts Asia from North America. From there, the TEPR would connect all areas between NYC and London by land.

Yakunin told the Siberian Times that the TEPR "is an inter-state, inter-civilization, project," and went on to say that the "project should be turned into a world 'future zone,' and it must be based on leading, not catching, technologies."

Wouldn't it be great to have the opportunity to travel from London to NYC by car? Maybe, but the plan's purpose isn't simply to create a worldwide highway; it's to make Russia the "new world centre for the creation and development of high-tech industries."

The plan would connect with Europe's and Asia's existing networks.

However, due to the fact that the project could cost somewhere in the trillions of dollars, it's unlikely that it will ever come to fruition.

Then again, CNN reports that "some sources have speculated that [Yakunin] could be Putin's likely successor as president," as the two are BFF's. 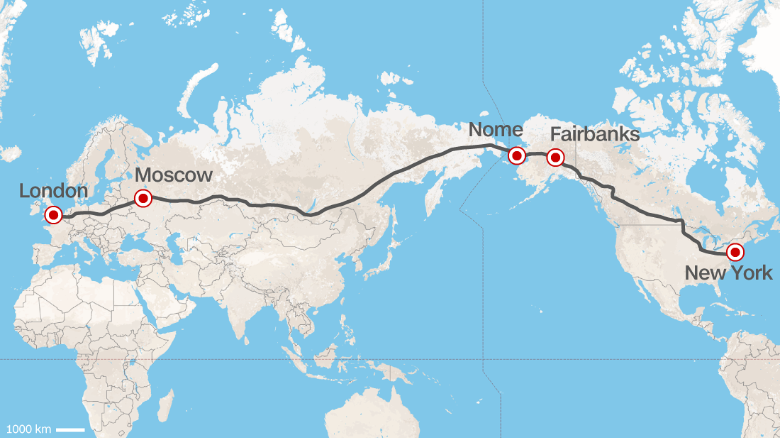 Regardless, we're not so sure that this plan is actually feasible, judging by the lack of an proposed explanation as to how the tracks would cross the Bering Sea from Siberia to Nome, Alaska (55 miles), or how the roads and tracks would then connect Nome to the nearest city (520 miles away).

All in all, we'd definitely put money on a super speed jet to get from London to New York in less than 11 minutes over this proposed superhighway.

C'mon, have you ever road tripped? NYC to Cali is enough, we're not so sure we could handle NYC to London. #Hardpass.

Check out Our Two-Hour Open Bar Booze Cruise Will Absolutely Blow Your Mind.