The world has been abuzz with talk of a Brooklyn-Queens streetcar.

Curbed reported that the proposal has garnered the support of several academics, transportation advocates, and elected officials.

All this information was gathered from a press release issued by the Mayor's office.

"Our transportation system was built 100 years ago to move people into and out of Manhattan, but that's not how our city functions today," said Paul Steely-White, who's the director of the transportation advocacy group Transportation Alternatives.

"Too many neighborhoods have been left behind, and Mayor de Blasio's plan will bring a state-of-the-art transit option that will save time and make our city more equitable."

The streetcar route has also been proposed. It would stretch 16 miles, from Astoria in Queens to Sunset Park in Brooklyn, bringing optimal transportation to areas that have been sadly bereft of transportation for years.

It would connect neighborhoods like Red Hook, DUMBO, Brooklyn Navy Yard, and Gowanus. It's currently being referred to as BQX, short for the Brooklyn-Queens Connector, and will link 13 NYCHA developments with more than 40,000 residents.

The project is anticipated to cost $2.5 billion. The good news? The de Blasio administration estimates that it would create 28,000 temporary jobs by 2045, and $25 billion in wages and economic activity for the city.

"Connecting the Brooklyn-Queens waterfront is essential to the economic future of New York City," said Michael L. Moss, director of the NYU Rudin Center for Transportation Policy. "The proposed streetcars will improve access to jobs and foster new waterfront activity that will benefit all New Yorkers." 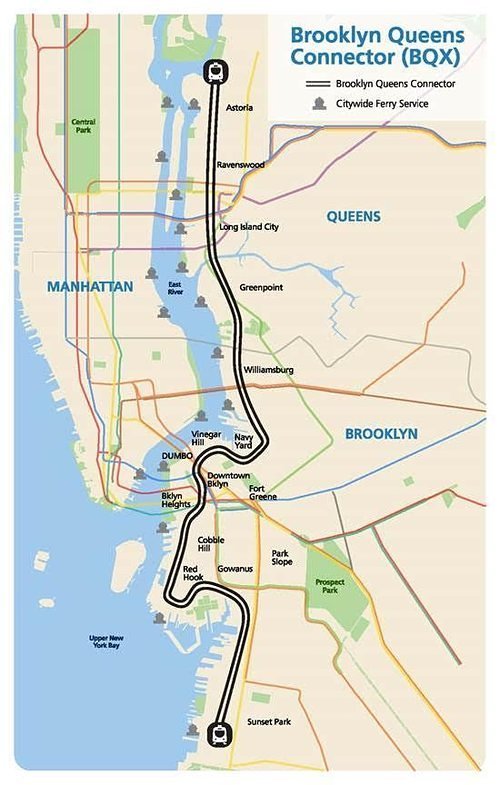 "My vision for One Brooklyn, a borough where the popularity of our brand translates to prosperity for all Brooklynites, as always focused on improving the connectivity between our communities and the opportunities they hold," Adams said.

"In a 21st century Brooklyn, we need 21st century transportation solutions to meet the historic challenges that have faced underserved communities."

Before work on the project can begin, it'll have to face a lengthy public review process. Still, work is expected to begin in 2019, and if all goes smoothly, the first car could launch in 2024.

Since the streetcar could benefit 50,000 people a day during their weekday commute, we're all about it. Anything that could help that many New Yorkers get around, especially New Yorkers whose transportation options have been limited for years, is all good with us.