Women Take the Cake: Female-Owned Restaurant Businesses Are (Finally) on the Rise in NYC

Unfortunately, the restaurant industry is one where gender equality issues still run rampant.

We're not asking you to believe us, just check out any Michelin-starred restaurant and count how many female chefs are on the line.

We can guarantee you that the number of female chefs decreases staggeringly when you look higher up the food chain.

Women simply aren't readily welcome in the boys club of the restaurant industry, but luckily many women in New York City are fighting to change that stigma.

It's difficult for women to become inspired by an industry when many chefs and culinary educators on a schooling level are male. Furthermore, many female chefs are passed over by investors who would rather stay within the "boys' club."

When New York Magazine talked to seven star female chefs, celebrity chef Alex Guarnaschelli stated, "I have colleagues- male colleagues- who say to me, 'Yeah, I just met with a big group of investors to open a restaurant.' I'm looking at them, trying to sip my coffee, like 'Yeah, bro, that must be rough.' And I go home and trade in the coffee for tequila. Did I do something wrong?"

Chef Rebecca Charles of Pearl Oyster Bar went on to say, "I do think there are businessmen in town that are women-friendly. But it's because they see women as a gimmick."

Hopefully, this new study regarding the economic potential of female entrepreneurs done by the Center for an Urban Future will help encourage females to break into leadership positions in the restaurant industry in NYC.

According to the study, "Women-owned businesses make up more than 40 percent of private companies in the city, up from 33 percent five years ago."

In the food industry alone, women-owned businesses increased 45 percent between 2007 and 2012.

However, Eater points out that these women are typically opening smaller businesses such as bakeries, catering companies, retail, or wholesale businesses rather than upscale restaurants. 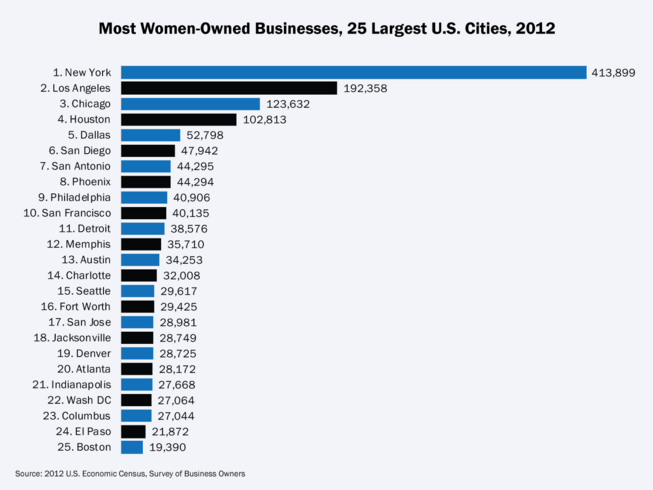 Via Center for an Urban Future

Still, Jalak Jobanputra of Future\Perfect Ventures noted, "From food entrepreneurs to those creating new business models in the commerce, finance and mobile sectors, women are stepping up, taking risks and working toward a better future for all of us."

This jump in women-owned businesses far surpasses any other city in America, with 413,899 female owned businesses reported in 2012 in NYC. Los Angeles came in second with a much lower 192,358.

Plus, there's vast room for growth, as 53% of the NYC population is female, making up 49% of the work force.

Hopefully, well see another huge jump across the board within the next few years because the disparity as it stands, to say the absolute least, is disappointing.

Check out The Macaronut Is Here and It's Absolutely Everything You Wanted in a Dessert.