Yes, we live in the greatest city in the world. Who would want to ever leave it?

We love our city as much as the next New Yorker, but we can also appreciate the beauty and splendor of other areas of the U.S.

There are so many things to experience in California that we'll just never be able to have on the East coast.

Trust us, once you leave NYC, you'll appreciate it so much more when you finally come back.

California is beautiful year round, but the weather in the springtime is like the Goldilocks of seasons. In most areas of the state, it's warm enough to wear a bathing suit and tan on the beaches, but cool enough that you won't look like you just got out of a bath.

When we were in California, people couldn't comprehend the concept of humidity. Why? Because they don't have air that feels as if you're walking through a steam room.

Where in NYC can you find a space big enough for 198,000 partying people enjoying the festival lifestyle?

Uh, no where. Plus, our city's open container laws and strict policing kind of make it difficult to experience a music festival like you can in California, where certain substances are (medically) legal. 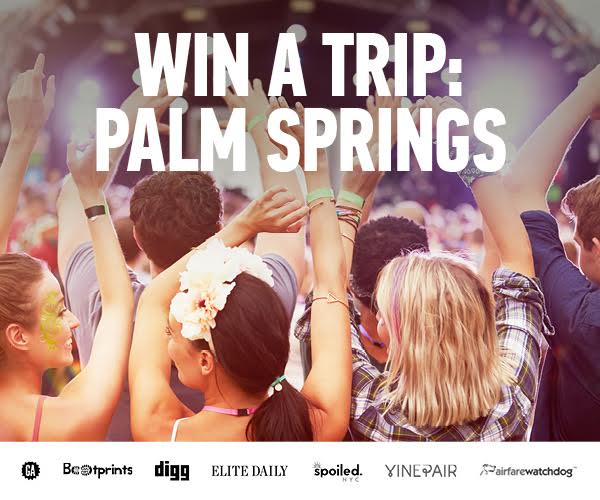 How would you like to experience California? We'd bet you'd most likely want to don your favorite crop tops, flower crowns, and hip hugging daisy dukes to spend the best weekend of your life in the crowds, listening to Calvin Harris, Guns N Roses, and Ellie Goulding at Coachella free of expense.

Oh? You'd like that? Guess who's sending two lucky winners on that trip of their lives? That would be us.

Enter here for your chance to win roundtrip travel to Indio, California, three nights at the Hilton Palm Springs, access to the Hilton's LED Day Club pool parties, and a shuttle service to and from festival grounds.

Seriously, enter by March 20th or you'll miss out on the best time of your life. #KiddingNotKidding

Uh, have you ever seen the rolling hills, rocky seasides, and soft sandy beaches of the California coast? What about the beautiful redwoods of the Muir Woods or farther North? How about the sea lions lazing on the docks of the San Francisco piers?

Probably not, but you really should. NYC is an architectural giant. We don't often have the chance to take in mountains, forests of trees that have been around for hundreds of years, or the hills of Hollywood.

We appreciate and love everything that our concrete jungle has to offer, but it's a breath of fresh air (literally and figuratively) to escape the hustle and bustle once and a while and just experience the natural beauty of our country.

basketballshooter10 Stephen Curry only need to make 26 three balls to top the record, he put up Last Season with 286. He is on pace to make over 400 threes this season. #nba#nbanews#nbanewsandupdates#goldenstatewarriors#stephencurry#threeball#three#30

We're pretty ashamed to say it, but our basketball teams are pretty crappy. With the Knicks in 13th and the Nets in 14th in the Eastern Conference, we don't often get to see a team that might break the '96 Bulls single season wins record, but we can in California.

If you've been to California in the last year and a half and haven't been to the Oracle Arena to see Chef Curry, KlayTops, Iguanadola, DrayBae, and Harrison "As You Like It" Barnes, you're missing the chance to see a baller on par with Michael Jordan, but so much less self-involved than LeBooty or Kobe.

Plus, once you witness the Oakland Coliseum, you'll appreciate how wonderful CitiField, Yankee Stadium, and the MetLife Stadium are in comparison.

Ever been on a hot air balloon? It's probably quite the hazard in the airspace above NYC, so we're going to go with a no on that question. But with the wide open spaces and sprawling land of California, you can take in the beauty of the state from the skies.

In NYC, we pretty much hike every day. Oh, you mean that walking 15 blocks in work heels isn't hiking? Guess not.

If hiking isn't your thing, head to the beach and grab a board. Learn how to surf the waves of the pacific at Huntington Beach in Ocean County. Regardless of your interests, there's something to do in CA that you just can't do in NYC.

NYC has an incredible food scene, but we just don't have the ability to eat a plate of food prepared with fruits and vegetables that were picked only that morning. Most areas of Cali have the proper weather to allow for year round farming, which means some of our summer foods are available in the spring.

California has some of the best food we've seen outside of NYC. We might even hazard to say that some of their food is even better than NYC, just due to the availability and variety of foods.

Plus, California has embraced the farmer's market scene, which means that fresh fruits and vegetables are available for cheap.

Apart from fruits and vegetables, you just can't get sourdough bread in NYC. No, seriously, you scientifically cannot. We're not going to go bread nerd on you, but the strain of yeast that is responsible for giving SFO's sour flavor can't survive in NYC.

Even if you brought the same starter (a part of the bread's dough that is cultivated using wild yeast) from San Francisco to NYC, NYC's wild yeast (yes, we have wild yeast) will take over the starter giving it a different flavor. You just have to taste a true San Francisco sourdough. Life changing.

California has this little thing called Napa Valley. It's not actually so little, but rather a chunk of area north of San Francisco that is most likely the most beautiful place we have ever personally witnessed (apart from NYC of course). If you're any kind of self-respecting wino, you need to check out Napa.

If you're not into driving through vineyard after vineyard of blossoming grapevines while traveling in between two sun drenched mountain ranges, how about checking out some of California's craft beers?

Yes, hipsters may have ruined the craft beer scene simply by being "into it," but we're pretty happy they've brought incredible beers to the east coast before it was cool.

When you're in Cali, you have to check out breweries like Russian River Brewery, Lagunitas, Stone, Bear Republic, and Anchor Steam just to name a few.

Make Sure You Make Your Way to Cali This Spring... On Our Dime! Enter Here.