How About No?! Someone Found a F*cking RAT in Their Popeyes Chicken & We're Ready to Riot!

Hey, so remember this summer, when we reported New York City rat sightings were down 80 to 90 percent?

Hopefully it's not because POPEYES IS SERVING PEOPLE RATS.

Yep, a woman claims to have found a deep fried f*cking rat in her Popeyes meal.

Rosemary Thomas, who was at a Harlem location of the chain, took to Facebook with a photoset depicting the fried vermin from a few angles and a shot of the Popeyes' storefront.

"Friends and family, this is a meal Popeyes in Harlem served my daughter, my niece and sister," Rosemary's caption says. "This is clearly a rat and they have the nerve to have a 5 rating by the department of health."

We can't even imagine how disgusted all parties involved must be.

According to DNAInfo, a Popeyes corporate rep let them know they were hosting an investigation and that while "it's not common to find unusual items in the chain's chicken, but she said when things are found, they usually turn out to be chicken organs."

We haven't really brushed up on our chicken anatomy in a minute, but we were unaware that chicken organs had EYES AND A TAIL. C'MON POPEYES.

"Omfg I would have died," commented a FB friend on her post.

Rosemary responded, "I know this will have an effect on her [her daughter] for a long time. Yesterday she ate nothing all day. All she kept seeing was the rat." 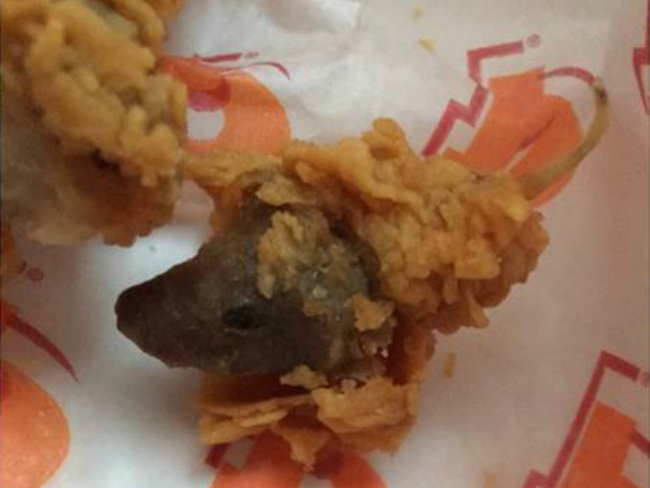 We literally can't even.

The exact location to avoid is 2730 Frederick Douglas Boulevard but TBH, we really can't see ourselves giving Popeyes our patronage again any time soon, popcorn shrimp be damned.