Bump in the Road: NYC Could Have Nearly 300,000 Potholes by the End of Spring

New York City's drivers have received a plethora of bad, but unsurprising news in the last few days.

For one, we're one of the worst cities in the world in terms of commuter congestion on the roads.

For another, a former Department of Transportation commissioner, Lucius Riccio, stated that the city could see anywhere between 250,000 and 300,000 potholes this spring, one of the highest numbers since the 1970s, according to DNAinfo.

Riccio told the Columbia's Data Science Institute that "a high number of potholes indicate a failure to maintain city streets. Fixing potholes rather than preventing them is far more costly."

The numbers are reminiscent of those of the 1970s, when NYC was forced to make large cutbacks in public service budgets.

While the Department of Transportation believes that potholes are primarily caused by the "freeze/thaw cycles during harsh weather months," Riccio found that a gap in resurfacing has a much greater effect than the weather.

Riccio states that NYC "has a 2,600 lane-mile deficit in underfunded resurfacing, a distance he compares to a one-lane road stretching from NYC to Pheonix."

Meaning, nearly 2,600 miles of NYC's 6,000 miles of roadways are not being resurfaced. If the DOT resurfaced the deficit and NYC saw no snow, the city would see less than 8,000 potholes a year.

He calculates that with the current deficit, each lane-mile incurs 84 potholes a year. Each inch of snow that the city is forced to clear from the streets creates another 1,428 potholes per inch.

While this does not seem like a significant amount, but when you've reached 30 inches of snow, the city is left with about 300,000 potholes a year.

Questioning whether we'll actually get 30 inches a year? We get it, we had a pretty mild winter, but let's remind ourselves of the two feet of snow we saw in just one weekend with the onslaught of Jonas. Seems a bit more feasible now, doesn't it? 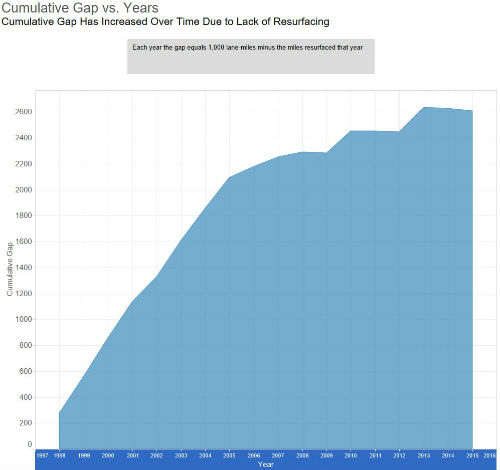 When you factor in the weather with the glaringly obvious underfunding in the DOT's resurfacing budget, well, none of this looks good.

The current commissioner for the Department of Transportation, Polly Trottenberg seemingly agreed (after Riccio sent her a copy of his research), as the DOT's resurfacing budget has increased from 1,000 lane-miles to 1,200 lane miles last year, and is expected to grow to 1,300 lane-miles this year.

Great. A whole year before the roads are any better, and if NYC's history of infrastructure deliverable and timeliness, well, let's expect by next fall there'll be maybe a drop of 10,000 potholes.

Check out NYC Has One of the 5 Worst Commute Times in the U.S.