From the Ashes of Pommes Frites, This NYC Band Went from Homeless to Governors Ball

On March 26th, 2015, two buildings on 2nd Avenue in The East Village collapsed following a massive explosion. Three people were killed and 19 injured - numbers which could have been higher were the members of Public Access T.V. not on tour in California at the time.

The band, a post-punk, new wave group formed in 2014, seemed to be on top of the world, touring across the country and writing their highly anticipated debut record.

The news of the fire, however, hit them harder than it did most New Yorkers: the band's shared apartment had been located in one of the now collapsed buildings. They didn't let this stop them, though.

Like the true New Yorkers they are, they mourned, they couch surfed, they picked up and moved on. Now, in 2016, the band is gaining more and more traction, seemingly by the second.

I meet Public Access T.V.'s frontman, John Eatherly, and lead guitarist, Xan Aird, on the corner of 4th street and 2nd Avenue on a day so beautifully sunny I'm starting to regret my leather jacket.

After introductions, the boys take me to a coffee shop around the corner where they buy a round of iced coffees and ask the owner about his new baby. They are clearly very comfortable here.

They're peering over the counter, cooing over iPhone photos of the newborn, when a dark-haired girl in overalls and round sunglasses appears out of seemingly nowhere and joins them at the counter. They order her a coffee and introduce her to me as a friend of the band.

We all settle onto benches outside the coffee shop; the boys light cigarettes as I open up my phone's voice recorder and and remove my notebook from my bag.

I know only what I've learned about the band over the past few days, not having been cool enough to know who they were before being assigned an interview with them.

The highlights from my research are that Public Access T.V. got their start in New York City, have toured extensively in the U.S. as well as abroad, and have cultivated a rather impressive following even before the release of their first record, which is set to debut in September of this year.

I think it's safe to consider myself now a part of this following. As I write this, I listen to my favorite of the band's tracks, "In Love and Alone", basically on repeat, because I am a masochist and listen to songs over and over again until they become repulsive to me.

That remains to be seen, though.

Eatherly, originally from Tennessee, moved to New York City when he was 18 and resided in Brooklyn for three years. After a brief stint back in Tennessee, Eatherly came back to New York and met Aird, a Boston native who had been living in NYC since 2006, and the two eventually formed Public Access T.V.

When recalling their first live show together, Aird says, "It was f*ckin' bad."

Eatherly adds, "Our first live show together was at Niagara. It was fortunately packed, and it was crazy. We had one song like on a Soundcloud at the time that I'm sure no one had listened to that was at the show."

publicaccesstv Well you know what happens after dark...

"We had said we had been a band a little longer than we had and that we had been practicing, we just lied. We faked it pretty hard, and then it worked. And then we had to become a band."

And they certainly did. The group released an E.P. in addition to several singles, and were almost immediately met with positive reactions from fans and media alike.

The band also received quite a bit attention after losing their apartment to the fire that destroyed Pommes Frites in March of last year. Luckily, the band was on tour in California at the time, but of course, they were still deeply affected by the incident.

"We were in LA and someone called me up and said 'your apartment's burning down.' We turned on the TV and it was like watching a Michael Bay film or something," says Aird.

Eatherly adds, "It was ridiculous. We watched it streaming on a computer outside. It was hard to believe that it was our place, for at least awhile."

Aird turns to me and asks, "Do you know why it burned down?"

I shake my head.

"Greed, that's why. It wasn't an accident. A human being and her lust for profit caused this."

He takes a drag on his cigarette, clearly still very shaken by the events of last year, and understandably so.

John explains that once they returned, they couch surfed with friends until figuring out another living situation.

I then turned the conversation to the current digital universe of music and their thoughts on the over-saturation that's occurring a result of the age of social media and self-released music.

"It's definitely over-saturated. And it's weird having to have an Instagram and Twitter and all that shit now. I feel like if we were a band, like, I don't know, 15 years ago, then maybe we could have gotten away without having all these things."

Aird adds, "Can you imagine buying a Black Sabbath record, and you know nothing about Black Sabbath? All you know is what you see from the record. And then you need to go see them."

I of course ask about the band's musical influences, as that's a thing that interviewers are supposed to ask bands (right?).

Aird chimes in: "If you want to understand John, just listen to "Walls and Bridges" by John Lennon."

Eatherly smiles and interjects with a modest, "That's probably true."

publicaccesstv NYC SEE YOU AT @govballnyc . Tix are on sale nowwww

Aird continues, "I think my biggest influence right now is a guy named Henry Threadgill. Check it out." "He's from the neighborhood. That's all I listen to right now."

I did. Turns out, Threadgill is a Pulitzer Prize-winning jazz musician and composer whose discography and collection of accolades is nothing short of extraordinary.

I asked the guys if they could recommend other NYC bands that they love right now, ones that people might not know enough about. "There's this band The Dirty Fences that we all like, NAF is cool," Eatherly says.

"There's this chick Aeriel East, I saw her play, she had a sting quartet, obo, french horn, harp, couple bass, piano, guitar, two backup singers and a drummer. And everybody in the audience was crying. It was amazing. The girl can sing," adds Aird.

Something catches the boys' eyes and I follow their gaze to a sandy-haired guy in jeans and a t-shirt, hovering near a car parked on the street in front of the coffee shop.

Pete Star, Public Access T.V.'s percussionist, descends the stairs to the coffee shop's patio as the boys introduce him to me. 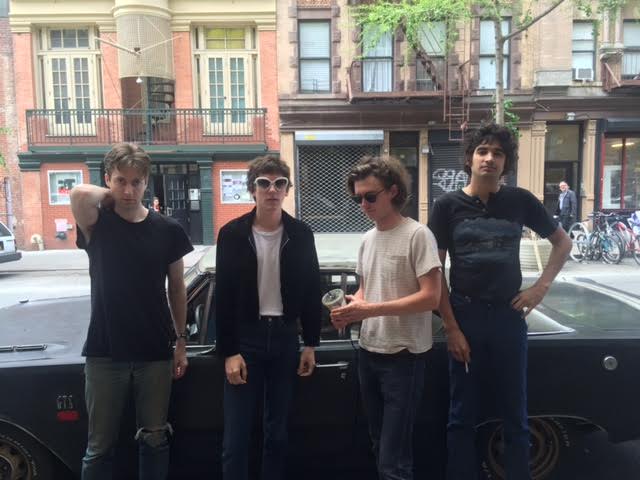 Star laughs but then considers the question.

"My Dad." he says. "Fatty. Fats." (They boys assure me that these are endearing nicknames.)

Star heads into the coffee shop to catch up with the others and I ask who they'd most like to collaborate with, living or dead.

I ask them about artists that fans might be surprised to find out have had an influence on them.

"I like Lana Del Rey," Eatherly says. "I admire her use of space in music. Patience. Great lyrics. Great cinematic quality."

"She's actually probably one of our biggest influences," Aird adds.

publicaccesstv Down on the Street

This leads to a discussion about the tendency to dismiss mainstream music simply because it's popular. The boys have a refreshing opinion.

"Mainstream is where it's at. We just gotta tamper with it a little bit," Eatherly says. "We're trying to turn the mainstream around. The line of what is mainstream and what isn't what it used to be. It's more blurred."

At this point, the band's bassist, Max Peebles, suddenly appears. The evenly timed entrances feel so perfectly, yet casually orchestrated that I'm beginning to feel like I'm living in a 1990s sitcom where a group of friends hangs out at local spot and conveniently run into each other every day.

"Max is the most stylish," Aird proclaims as Peebles shakes my hand.

"He listens to the most music," Eatherly says. "Max DJ's all the music in the van when we drive. It's an important role."

The amount of genuine love and respect these guys have for each other is very apparent. As you may have noticed, they relish in any opportunity to point out each other's talents, quirks, and other defining characteristics that can only be known about a person that you have shared significant moments of your life with.

It's a nice thing to witness, and something that the average person might not expect from a rock band.

publicaccesstv I'm sticking with you

The conversation turns to their upcoming tour once the record is released.

"We all kind of prefer to be busy and like not having to be here for too long. We get a little crazy not working," Eatherly says.

Will they still be cranking out new music while they're traveling? Absolutely.

Aird jumps in: "John's flesh is bursting with music. He needs to let it out. He yodels. John's a hillbilly. When John was born, his family brought a sack of Texas soil and they spread it out underneath the bed that his mother was pushing him out on."

"Born in Tennessee, on Texas soil," Eatherly adds with a smile.

I'm curious if Eatherly's Southern roots have any influence on his music.

"I didn't really listen to a lot of country music growing up, my family didn't either," he says, "but it's in there somewhere, I guess. In a hillbilly kind of way." He laughs.

I'm also quite curious as to where the name of the band came from, and quietly scold myself for waiting so long to inquire. "

Eatherly adds, "It's an homage to PIL, Television [the band], and public access television as a thing. It's cool because anybody can make a show on it.

It's a place for weirdos and whatever. And also, it sounds kind of ridiculous and stands out. At the time we were making it it felt like there were a lot of bands that were just one word with like an 's' on the end."

I simply cannot end this interview without asking a question that I personally consider one of the most crucial of the day: how do you feel about Beyonce's Lemonade?

"You have to bow down to the queen," Xan adds.

As far as I'm concerned, these guys pass muster.

Before I head out, I ask the guys if I can take a photo of them to include in the article.

They agree, lead me to a spot a little ways down the street, line up, and as I hold up my phone, they effortlessly settle into contrived, yet ultra-casual, subtle poses.

Maybe they have yet to officially "turn the mainstream around", but it's obvious: they're already stars.

Check out This Insane Blues-Rock Duo Gettin' Ready to Riot at Governors Ball.