It’s easy to get worn down by the commercialization of New York City.

It’s difficult to be patient with slow moving visitors clogging the sidewalks, jamming the venues, and making you feel like Gotham isn’t your hometown anymore.

That’s why it’s so important to hit parts of the city where the local factor is high, and the tourist level is low.

Nothing against the out-of-towners, but sometimes it’s nice to just hang out with other New Yorkers

Don’t get us wrong, many of these places are known by tourists, but for the most part, here’s where you go when you want to mix with born and bred New Yorkers.

Basic. No frills. Nothing fancy.

There’s diners and there’s diners, and then there’s the Cup and Saucer Luncheonette on the fringes of Chinatown.

Perched on the corner of 29th and 9th, BillyMark’s stands out from the rest of that fairly well-defined block.

Your prototypical Dive Bar, this establishment is a holdout of a disappearing breed of NYC watering holes, and the people who enjoy them.

This place is a little more well known these days, thanks to its cameo appearances on “The King of Queens,” but it’s still the most “delicious way to cool off,” as it has been since the Forties.

The other establishment on this list that might have a higher tourist factor, but the regulars all live here.

What are you into? They got it. Pool tables, ping pong, foosball, with a kitchen and a full bar? Nothing but awesomeness. 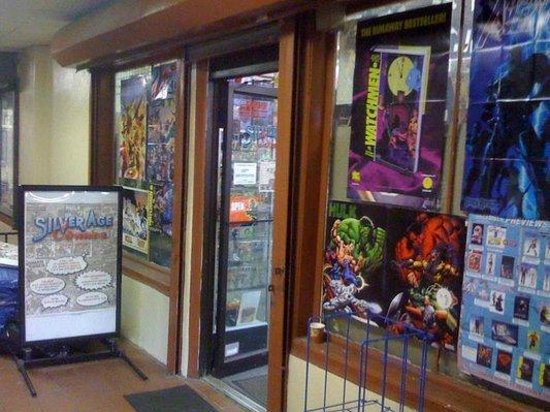 Take the N Train out to Ditmars Boulevard, and this little gem awaits you right in the station. There’s bigger comic stores, and they’ve got more stuff in stock but that doesn’t matter here.

This is a real comic store, a throwback. You can tell as soon as you walk in, and the aroma of a store full of old books hits you.

All big budget star-studded superhero movies owe their existence to places like this, and the people who frequent them, not the newer, flashier stores.

Open 24 hours a day, this Williamsburg joint has only been around since the early 70s, but it feels like a classic 40s or 50s place.

It caused a mild controversy when it underwent renovations in 2008, but that quickly died down once it became apparent that the Diner was about the people and the atmosphere it created, and niggling about updating its look was silly.

This is “Little Italy” for locals. This entire Belmont neighborhood is jammed full of amazing bars and restaurants, offering Italian food that holds it own with any similar fare from all over the world. Pizza. Sausage bread. Amazing.

Yeah there’ll be out-of-towners, the old folks who’ve moved upstate and are coming back to stock up for family dinners.

The first thing you see when you walk in this tiny store is a wall full of Atari 2600 cartridges. It’s like seeing old friends you’ve missed for years.

This place is easy to miss, but if you’re into old games and computers, and you need a fix of ColecoVision, Intellivision, Sega, Commodore 64, and any number of electronic collectibles you can’t find anywhere else, this is where you need to go.

This is not a store. This is a Rivington Street Time Portal.

Sifting through the massive mounds of assorted candy from all over the world, you’ll find toys, 1980’s trading cards, and old comic books, all while drifting through an ambience of chocolate and sugar. You will enter an adult, and you will leave a child.

Farrell’s on a Friday night is a rollicking good time. This Windsor Terrace, Brooklyn, pub has been around forever, and you might recognize it from movies like As Good As it Gets.

Go there during the day and you can get your beer special in a Styrofoam cup. No pretenders frequent this place, you won’t see a lot of visitors, and you better not talk any trash about the New York Rangers while you’re there.

Did you know some of the best donuts in not only NYC but the world can be found in a store connected to a gas station?

Yes, really. It’s easy to miss, and with it being right across the street from The Intrepid, you’d think it would be swamped with tourists. Nope. Still a relatively well kept secret.

After New York City lost Religious Sex, this establishment has been the only alternative.

The store provides everything to feed your dangerous side, from costumes, to accessories, to lingerie, and various other oddities. Oddities like your fellow New Yorkers.

Perennially packed with NYU students, there’s a generous helping of old-timers here too.

Good food and good prices means it’s always packed, but out-of-towners are more likely to head to Christopher Street. That leaves the old school deliciousness all to yourself!

Nothing against the Strand bookshop, regular readers know we’re big fans of that place, but if you feel like a little more space while you browse for god reads, right around the corner on 4 Ave, you’ll find Alabaster Bookshop.

It still carries a great selection, and they’re used books, so the prices are good too.

Look, nothing against tourists, we love that you love our city, but sometimes we need to love our city with people actually from the city. It’s how you connect with your community, by connecting with the people who live there.

Certainly there are many more places to find real New Yorkers. We’ll visit this topic again shortly, and show off a few more.

Check out Tips for New Yorkers Moving to Canada (from a Canadian New Yorker).