Ah, pizza. The quintessential meal that makes us salivate just thinking about it.

We love it in about every form it can possibly take. New York City does its best to slay the game beyond reproach, Yonkers tries its best to keep up, and generally speaking, nobody outside of New York can replicate New York-style pizza without totally botching it. That's a fact.

And pizza has everything you could want in a food: variety, hilarious attempts to be healthy, portability, and it’s just as good, if not better, as a cold leftover.

Speaking of cold foods, ice cream shares most of those traits. We love you, FroYo, but we’re not eating a whole pint of you as we binge-watch Stranger Things. Ice cream has our hearts and our taste buds.

Once you’re done throwing up in your mouth, we’ll tell you we’re kidding. Mostly.

Thrillist tossed some savory news onto them internets about Kono Pizza, a company looking to take one of the most convenient Sunday night dinners/Monday morning breakfasts and make it even easier to eat.

Kono Pizza sells the cones for three to five dollars in your typical pizza styles (pepperoni, veggie, margherita, and chicken parm), a steep price for anybody who’s not a New Yorker. 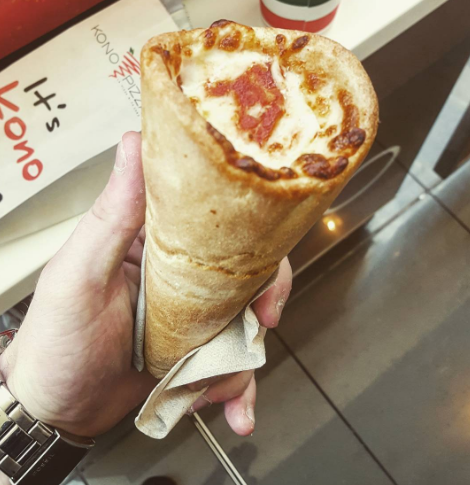 The company is opening locations in New Jersey, D.C., and Baltimore, but there’s no news on an NYC location.

We cherish our dollar slice though, so we’re in no rush to saunter over to Jersey for a... cone? What do we call this now? A cone of pizza? We’ll keep you updated on the most important part of this food: the label. For now, we'll wonder what Italian cuisine gets coneified next. We already got spaghetti.