Right of Way: Transport Union Says Pedestrian Fatalities Are Their Own Damn Fault

New York City's streets are dangerous. Sure, we all play frogger through the streets in our insane rush to get to work or home, but is the risk of our lives and the lives of drivers worth those extra few minutes?

You may think that the risk is worth the payoff, until you recognize the actual dangers of pedestrian behavior.

According to Pete Donohue of the Transport Workers Union, pedestrians are at fault for nearly half of the accidents that resulted in a pedestrian death.

He states that "pedestrians are a menace- to themselves." According to Donohue, the Vision Zero Pedestrian Safety Action Plan that Mayor de Blasio released in 2015 reports that pedestrian behavior is the cause of nearly 43% of pedestrian fatalities, and a contributing cause to another 16%.

Yet, he has "never heard a city official speaking harshly or at length about pedestrians carelessly and recklessly putting themselves in harms' way." He even goes on to state that "the city report at times manipulates figures to keep the focus on drivers."

Essentially, Mr. Donohue (in brash, seemingly harsh words) brings up a pretty glaring issue for the city of NYC. In a city with 107 pedestrian deaths last year by November of 2015, are we really putting ourselves at risk more than the drivers that roam our streets?

Sure, we can argue that taxi drivers sometimes don't adhere to the 12-hour workday limit, tourists don't know their way around, or commuters work long hours and aren't at their peak while driving home. But is that really the crux of the problem? 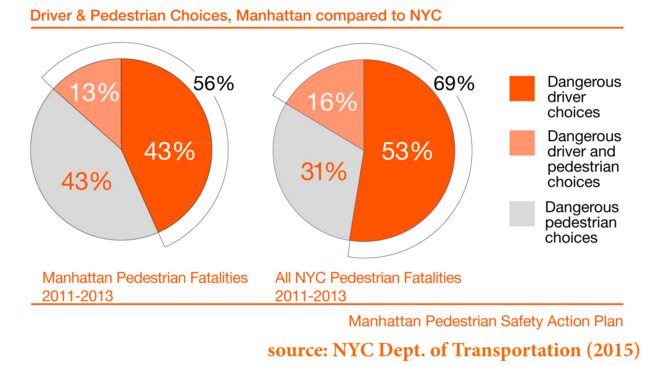 We have to agree with Donohue on the fact that too many people are distracted walking.

The media is pretty quick to vilify automobiles in response to a pedestrian death, yet we do not publicize the dangers we put ourselves in when we walk aimlessly through the busy streets while on our phones or in a rush to get to work.

We can't say that we're not guilty of it... Hell, we're pretty sure we ignored a couple of signals on our commute today alone. But it's time that we begin respecting the laws of the road, both behind the wheel and on the sidewalks. It's only a matter of life and death.

Check out This Is How Much NYC Neighborhoods Get Per Square Foot.