There's a $1 Billion Expansion Coming to the Javits Center-- Complete with the Largest Ballroom on the East Coast!

First, he announced plans for New York State to cover recent college grad's loan payments for two years. Then, he announced much needed plans to renovate Penn Station ... and rename it Empire Station.

Now, he's planning a $1 billion facelift for the Javits Center.

We guess Cuomo really meant it in the news conference at Madison Square Garden on Wednesday when he said, "Let's be as bold and ambitious as our forefathers before us."

The Javits Center is already one of the busiest convention centers in the United States. Each year, its trade shows and special events generate up to $1.5 billion in economic activity and support as many as 14,000 jobs for New Yorkers.

Still, according to Peter Ward, President of the New York Hotel and Motel Trades Counsil, it could be it could be doing more.

The expansion Cuomo announced will be financed by the Javits Center and the Empire State Development Corporation.

"Through one of the most aggressive development plans in the history of the State of New York, we are transforming one of our largest convention centers into an unparalleled, world-class venue," Cuomo said.

The expansion will take the already huge, 2.1 million square feet of the Javits Center and stretch them to 3.3 million square feet. No, it won't encroach on any of your favorite parks - the whole project will happen exclusively on Javits-owned land.

Construction is expected to begin in late 2016. When all is said and done, the renovations will include a 500,000-square foot exhibition hall, and five times more room for meeting space.

There will also be a new, huge ballroom. It'll be 58,000-square feet huge, in fact. If that sounds giant to you, it's because it is. It'll be the largest ballroom on the East Coast.

"This will be the convention center for the next generation," Cuomo said. "The new Javits Center will continue to garner millions in economic activity, create jobs and keep New York's economic momentum moving forward." 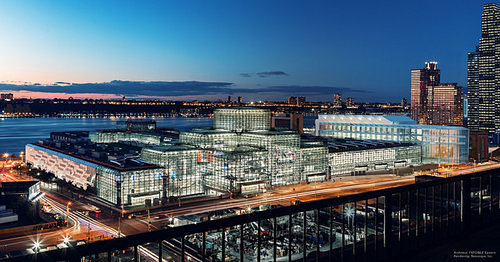 There are other perks to the Javits Center's proposed expansion. Trucks, now parked on neighboring streets, will be able to park in a new, 480,000-square-foot truck facility, which will house hundreds of trucks.

The proposal also outlines plans for a green roof terrace with views of the Hudson River, which will have the capacity to accommodate 2,500 people.

The green roof terrace isn't the only environmentally friendly aspect of the plan, either. There will also be a 34,000-square-foot solar energy array. It'll be the largest of its kind on a public building in New York.

Beautiful and nice to the environment? We've got to hand it to you NYC. You've done it again.