State Comptroller Thomas P. DiNapoli released an audit on Wednesday that showed subway riders in New York City are waiting longer for trains — and things are getting worse.

The audit also found that the MTA uses a form a measuring the times that may make subway performance seem better than it actually is.

"The MTA is very clear that it considers its wait time assessment to be its most important measurement of the reliability of subway service and riders' experience," DiNapoli said. "It turns out the way transit calculates this measurement obscures the reality of straphangers' wait times. New York's subway riders deserve better."

Subway overall wait time performance also dropped between March 2013 and August 2014. As of June 2015, the MTA’s year-to-date assessment performance was 78.4 percent — 2.3 percent below its goal.

DiNapoli continued by saying that by the MTA’s own measure, wait times are getting worse — however things might seem better than they actually are.

The audit found that the agency’s wait assessments — in which the MTA sets a goal for meeting weekday targets of time between trains, measured by averaging all lines together — are potentially misleading and created using “questionable math.”

According to DiNapoli, the MTA comes up with the wait times when combining annual averages that do not separate the large lines from the small ones — especially shuttles.

The state comptroller goes on to call on the MTA to revised and disclose how it calculcates and reports its performance when it comes to wait times; address the worsening in wait time performance with a detailed plan; and develop and implement a process to let riders know of delays and alternative routes based on real-time data.

In response, the MTA said that the comptroller’s audit includes “misunderstandings, misinterpretations and outright misrepresentations” of how the MTA is meeting the challenges of a growing ridership.

“Crowding is the single most frequent cause of subway disruptions, followed by maintenance work on subway tracks. Contrary to the audit's claims, the MTA has launched robust efforts to analyze and attack the root causes of delays, from increasing preventative track surveys and maintenance to deploying rapid response teams and additional staff on platforms,” a statement from the MTA said. 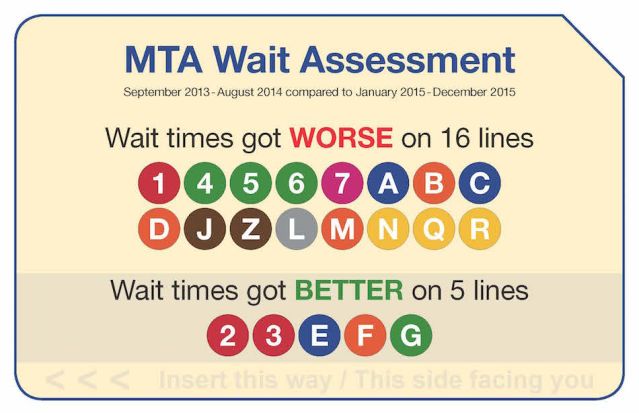 The agency added that in its 2015-19 Capital Program it provides a “critical resource” to improve wait assessment by reducing disruptions, improving infrastructure and increasing the number of trains during rush hours.

“The MTA is committed to improving subway service for our growing ridership,” the statement continued. “The comptroller’s audit does nothing to help this effort.”