The Rent Is Too Damn... Fine? NYC Rent Prices Are Dropping—Thank God!

The search for a good place in New York City is a struggle. When hopeful tenants think of NYC apartments, the floor plan spaces of Friends, Rent, or Sex and the City generally come to mind.

Anyone who’s ever lived in New York or tried to however knows that apartments like that cost more than an arm and a leg—even if the space is the size of a closet.

And you would still need at least a roommate. Or two. Or five. Hey it's great to live with people as long as you compromise, right?

That is, until recently.

We saw the first signs of falling rent before, but now it's official. According to Zumper’s Rental Price Index, New York’s one bedroom prices fell below $3,000 for the first time in a while. In fact, a search on their site can lead you to apartments under $2,000. Can we get an amen?

New York has seen huge declines in rental prices since last year, as one bedroom and two bedroom prices have fallen by a whopping 9.1% and 10.5% respectively.

Why? Is it that more people are getting roommates? Living in Hoboken and Jersey City? Moving to cheaper boroughs? Staying with the parents?

The answer is: who cares?! Cheaper living in the city is awesome.

It just means that the dream of a decent looking loft apartment in the city, walk-in closet included, is slightly closer to reach.

And this isn't exactly trending nationally. Renting in other nearby major cities are now dealing with price hikes in one-bedroom apartments. The unfortunate souls in Providence, Philadelphia, and Long Beach are up 14% compared to twelve months ago. 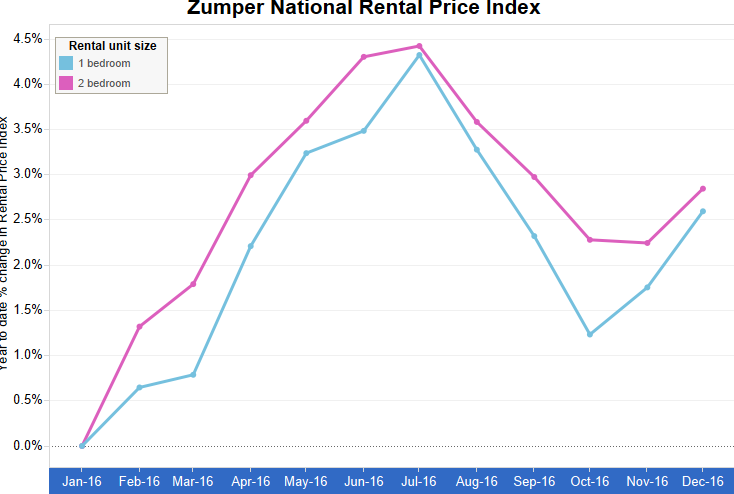 So, are we still the city where the rent is too damn high? Well, yeah probably considering we're still in highest taxed state in America.

But this helps. Kinda. Sorta.