It can often be very difficult to fully express the seriousness of an issue to a person who is not experiencing it themselves. While we may know the risks and consequences of our actions, it likely only lingers in the back of our minds as an afterthought rather than an actual threat.

Campaigns working to promote sexual health and STD testing, are often at a loss for how to get through to the “at risk” age group, who may not really know how vulnerable they are until they have a problem themselves. The typical, "oh, but that wont happen to me?" response.

Also, how do these campaigns really appeal to their targeted audience, a group who tends to live like they're invincible, in a way that is memorable?

The NYC DOH's newest campaign takes a particularly unique approach to combatting the rise of STDs, in a way that hopefully, while bringing a few laughs or even rolled eyes, will get the conversation going.

The NYC Health Department is actually using emojis to appeal to young people. Since emojis have become such a prominent means of communication via texting, email, and other social media platforms, it isn't so far-fetched that the Heath Department would make the attempt to use them to relay this important message.

The ads will run on multiple social media platforms, as well as being posted in subways and on public buses. With rates steadily increasing in the past few years, NYC mayor Bill de Blasio is committed to combatting the rise of STDs, using over $20 million annually towards the issue.

So the thing is, this does make light of a very serious issue, which may understandably not sit well with a lot of people. However, it wouldn’t be the first time that our society uses risky comedy as a means of interacting with not so funny issues. 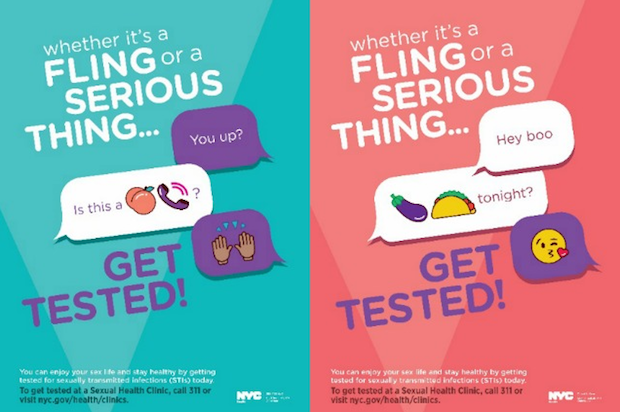 In this case, it seems that the issue of STDs in New York has grown to the point where any attempt at raising awareness, is worth a try.