The rest of the country thinks that we live in a dog eat dog city, which is just false. Sure it can be a tough place to live, but not because of the people... it's just too damn expensive.

According a U.S. News & World Report, New York City ranks as one of the worst major cities in America to live in, coming in 96th place out of 100.

While we will respectfully and vehemently disagree with this statement, the basis behind the conclusion seems valid: the city's housing prices are entirely unrealistic for most of America.

The list was based on analysis of 100 cities from around the country, analyzing:

Job Market Index (20%), Value Index (25%) which included median household income and annual cost of living, Quality of Life Index (30%) including crime rates, quality of health care, education, well-being, etc., Desirability index (15%), and Net Migration (10%), which measured how many people are moving to or away from an area.

The main reason why NYC scored so poorly, is due to the issue of rising housing costs, a fact that even New Yorkers who make more than $100k every year are acutely aware of.

"Affordable housing is an ongoing problem in New York City, with one-bedroom apartments renting for thousands of dollars a month," stated U.S. News.

They go on to point out that many people in the outer boroughs, like Brooklyn, feel that the gentrification has priced them out of their own neighborhoods.

Then again, we have more people walking (or power walking) and taking public transportation than the national average. 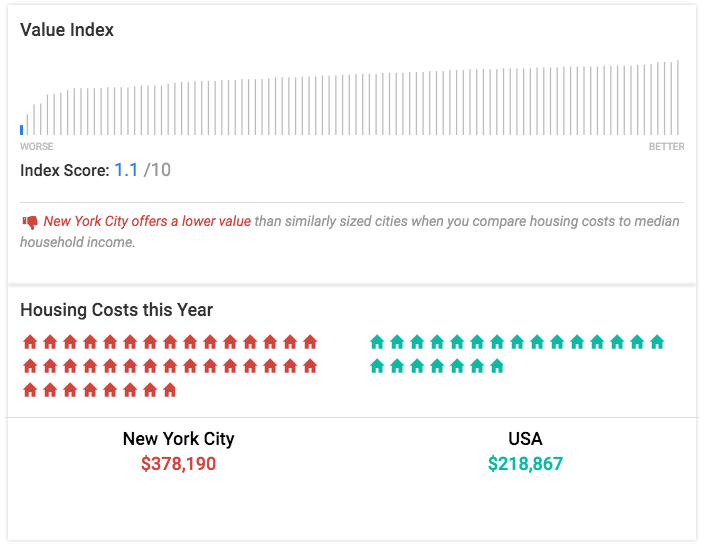 Regardless, the housing market is simply too high for NYC to remain a desirable location to live.

Check out 10 Richest Neighborhoods in NYC.