Did You Know NYC Ranks 5th in the Country's Best Cities for Public Transportation?

Have you ever ridden on another public transportation system and thought, "Wow, this is soooo much more efficient/well-kept/faster than the subway?"

We have. Many times. Whether we're lucky enough to ride public transportation systems outside of the US, or have ridden the BART or the Washington Metro, we know that our system is far inferior to similar systems.

With ridership rates on the rise and subway closures imminent, it's obvious that we certainly aren't the most efficient, but we're also far from the worst.

According to a study by SmartAsset, New York City's public transportation system is in the top 10 amongst the country... but what was that ranking based on?

SmartAsset based their rankings on on five metrics: average commute time, percentage difference between average commute times of car vs. transit commuters, percentage of commuters who use public transit, total number of commuters who use public transit, and the difference between citywide median income and the median income of transit users.

"Based on sheer size, there is no question that New York City has the top public transportation system in the U.S. It moves by far the largest number of passengers, with subway ridership of more than 1.7 billion in 2014. When including buses, total ridership is more than 2.5 billion."

So even though we came in fifth, we're considered the top public transportation system based on the massive amounts of riders.

Who came in first? That would be our nation's capital, Washington, D.C. The Washington Metropolitan Area Transit Authority, known as the Metro or Metrorail, is the second largest system in the U.S.

San Francisco came in second, with their cable cars (though primarily only ridden by tourists), buses, and Bay Area Rapid Transit system, which also spans to Oakland and Berkley.

Boston came in third with Chicago following in fourth. 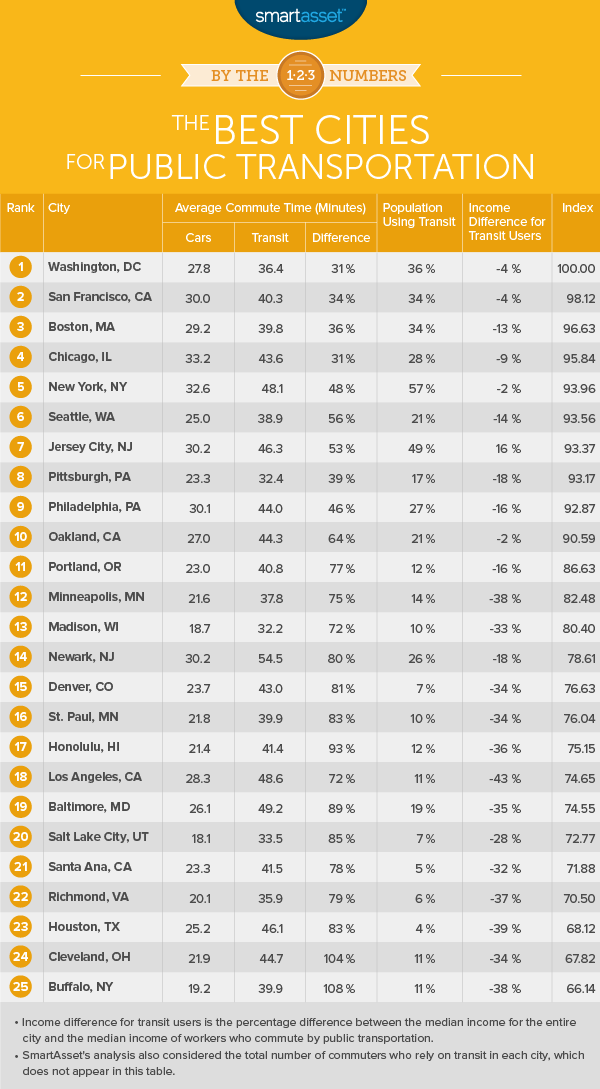 Check out The MTA's Posters Banning Hoverboards Are as Ridiculous as You'd Imagine.