These New Renderings for NYC Subways & Stations Are Absolutely Everything RN

The MTA unveiled on Monday what it’s calling an “ambitious plan” to add more than 1,000 more subway cars and renovate 31 stations as it tries to improve service amid increasing ridership.

Their features will include wider doors, and 750 will have “Open Car End” designed-cars, which will reduce wait times and increase capacity.

The governor’s announcement also highlighted the MTA’s efforts to bring its stations into the 21st century, and previewed extensive renovations at 31 stations from across the five boroughs.

“New York deserves a world-class transportation network, worthy of its role as the heartbeat of the 21st century economy,” Cuomo said. “The MTA design team developed a bold and visionary re-imagining of the quintessential commuter experience, incorporating best practices from global transit systems, and focusing on our core mission to renew, enhance and expand. We are going to do more than renovate —we are bringing subway stations to a higher standard than ever before, and the new vision for subway cars will increase capacity and reduce overcrowding and delays.”

Subway use is at its highest level since 1948, with nearly 1.8 billion rides a year, according to a recent report from the New York Times. Train delays due to overcrowding are also rising, according to the publication. Since 2012 they have quadrupled to more than 20,000 each month. 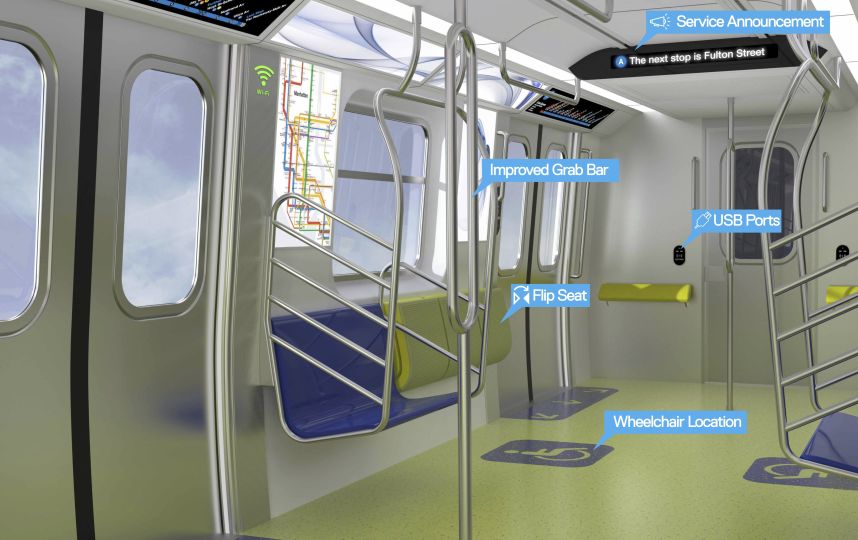 The MTA is hoping by expanding door width from 50 to 58 inches, it will reduce delays by allowing customers to enter and exit more quickly. Open Car End design also has a similar aim by placing the door between cars with an “accordion-like connector in order to create longer, open spaces, allowing for greater passenger flow movement and increasing capacity in the process.”

Other modern amenities being added to new cars include Wi-Fi, USB chargers, full color digital customer information displays, digital advertisements, illuminated door opening alerts and security cameras. On the outside there will be a new blue front with large windows, LED headlights, and a blue stripe with gold accents along the sides.

The MTA said it’s using design-build contracts to speed the process and “ensure the shortest timeframe for project completion.” Both the subway car and station investments are part of the $27 billion, five-year MTA Capital Program.

Station improvements will begin with a requests for proposals for three Brooklyn stations - Prospect Avenue, 53rd Street and Bay Ridge Avenue. Requests for proposals for the rest of the 31 stations will be released over the next 12 months, and will be distributed across the five boroughs, according to the MTA. The first contract is expected to be awarded in the fall, and station closures will be limited to a six-month period.

“The governor gave the MTA a mandate to implement new, world-class designs as quickly as possible for all new subway cars and that’s what you’re seeing today — innovation making the lives and commutes of all New Yorkers easier,” MTA Chairman and CEO Thomas F. Prendergast said. “Coupled with new methods for redeveloping our stations at the governor’s direction, customers will see us get in, get done, and return new and improved stations to them in the most efficient way possible.”

The 31 stations are part of a larger effort by the MTA to improve “the customer experience”, and includes component and renewal work at more than 170 other stations. Overall improvements include enhanced lighting, improved signage, inclusion of amenities, such as countdown clocks, improved cellular connectivity, Wi-Fi and new art. Renovations will also consider “the architectural legacy of each station, and remain sensitive to historical elements” as the stations are redesigned.

Check out This Amazing Beatles-Themed Morning Dance Party on a Yacht!