Tired of waiting for the Second Avenue subway line?

Trying to come up with a new subway line to replace the L while it's closed down?

Now your dreams can become reality, well... sort of.

A new interactive game allows players to modify current, past, and future New York City subway lines, or even create their own.

"Brand New Subway" is an online interactive transportation planning game that allows players to take the subways into their own hands.

It's basically the Sims, but for subway lines.

DNA Info reports that the game was created by engineer Jason Wright as an entry for a competition that challenges contestants to basically build a playable game based on a 1,00+ word biography of Robert Moses, a city planner from the mid-20th century who was known as a "master builder."

The game also provides some valuable statistics on your subway line.

You'll be able to find out what kind of impact your new line will have on Metro Card fares, and just how many people will be a part of the daily ridership of your line. 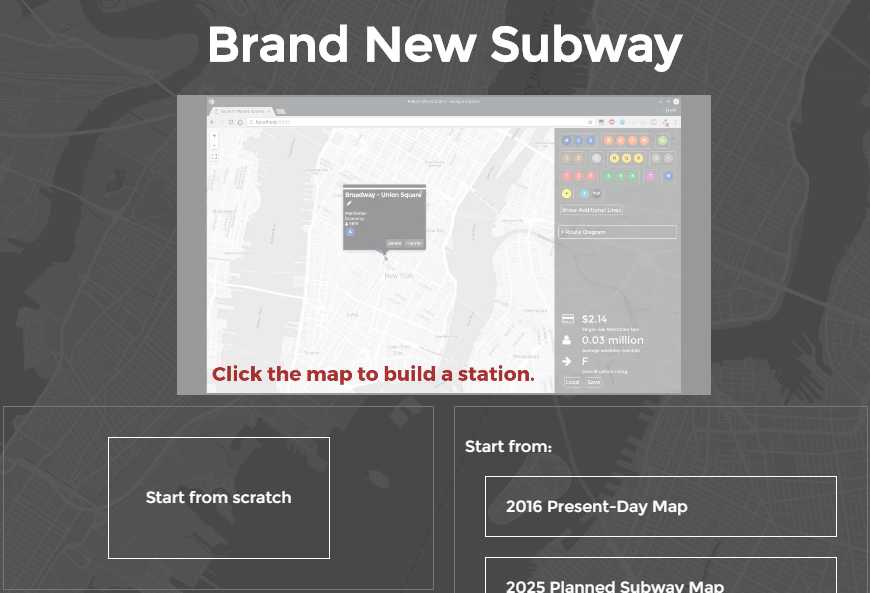 Once you've completed your perfect subway it's assigned a letter grade, so you can strive to make sure you get that perfect A+ subway.

Of course, creating a subway line that only goes from your house to your work―to your favorite take out spot, probably won't earn you the best letter grade, but this is one time we probably wouldn't mind taking a lower grade if it means we got the perfect subway station.