#OldPeopleOnly: There's a Club Opening Up for Non-Millennial, Non-Party People Over 35

At SpoiledNYC we love to talk about the nearby bars, dives, and clubs in the city. But if you’re tired of all the hard clubbing in your area you’re in luck!

A new venue is coming your way to rid you of the ‘hard partier’ problem.

Depending on the genre of music from those decades, we don’t know how to feel about it.

"This has been a lifelong dream for me, to open a place like this," owner Jeff Wittels told DNAinfo.

"I’m just excited about bringing back some of the music from the '70s, '80s and '90s and having people go out and be able to enjoy it again… instead of going out and hearing house music where you don’t know what’s going on."

Okay, we can’t argue with wanting some down time. But don’t worry! If you’re under 35 but just don’t want the NYC clubbing noise, you won’t be denied access.

Wittels says he won't actually turn away patrons under 35, but wants to attract, "people who might be interested in having a nice glass of wine versus sitting there and drinking 100 shots out of a bottle."

Ouch Wittels. That’s under the assumption that only people under the age bracket want to take shots all the time. And that’s way too many shots for any human to consume. 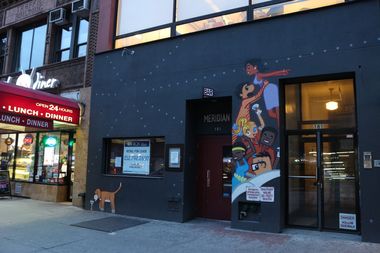 But we can understand where he’s coming from, since every one of any age can appreciate some down time and cool tunes.