ICYMI: NYC Will Be Getting Even MOAR Protected Bike Lanes by the End of 2016

Cycling in New York City is pretty much its own culture.

While the commuter debate still rages on strong, cyclists will always stick by their bikes.

You should know how fickle cycling in NYC is, even if you don't even own a bike.

We've all been that jackass once or twice, the one who waits to cross the street standing in the bike lane, and having to hurl yourself out of the way by a Seamless guy screeching obscenities at you for the next block.

By the way, don't blame him, JUST DON'T F*CKING DO THAT, it's hard enough for bikers to avoid cars, this is literally why we have sidewalks. But also, I'm talking to YOU CitiBikers, stop making cyclists look bad because like we said, the sidewalks are not for you.

It would be great if cyclists had more room to themselves, just like cars and pedestrians do, which is exactly why Mayor Bill De Blasio promised earlier this year to build 15 miles of new paths by the end of 2016, and proposed 60 miles of physically protected bike lanes altogether.

This ongoing plan has recently been expanded, to 75 miles of new bike lanes by the end of 2016, and 18 miles of physically protected lanes placed throughout the five boroughs in areas where the most cyclist and pedestrian fatalities occur.

"We know that bike lanes not only get more people cycling, they calm traffic and save lives," stated Mayor de Blasio. "No cyclist death is acceptable, and that's why we'll continue raising the bar to keep riders protected."

It's tragic how desperately NYC needs these lanes to protect their cyclists. One sobering fact is that this year, more people have already been killed in cycling accidents than in all of 2016.

Gothamist reports that a few of the new protected lanes will be placed in the following neighborhoods:

- Bruckner Boulevard in the Bronx, from Hunts Point Avenue to Longwood Avenue

- Jay Street in Brooklyn, between Sands Street and Fulton Street 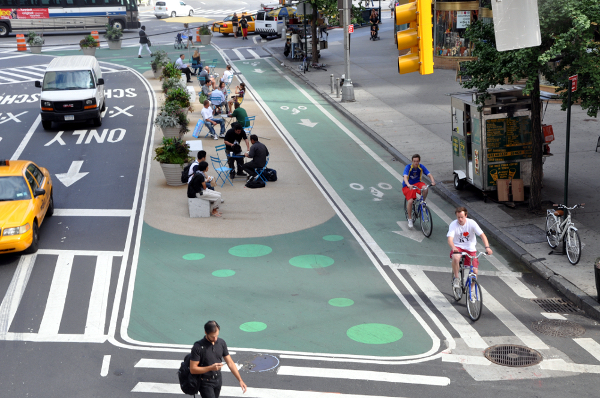 Gothamist also cites a 2014 study by NYC's Department of Transportation that estimates serious injuries on streets with physically protected bike lanes dropped by a whopping 75% after the lanes were installed.

It's not a perfect fix but hopefully, in addition to more people driving and literally just walking around with more common sense, these bike paths will be what's necessary to protect the cyclist population of NYC.