#DomeLife: Did You Know Midtown Was Almost Covered with a Giant Dome Back in the 60s?

New York City, Manhattan in particular, is pretty much a microcosm living in a self-contained bubble.

Sure, some people may follow what's going on with the rest of the earthly population, but a majority simply continue along with their lives.

But did you know that Midtown was almost literally a city living in a bubble?

If a plan from the 1960s had succeeded, Times Square and the rest of Midtown would be enclosed in a geodesic dome.

The plan was proposed by Buckminster Fuller, an engineer, in the 1960s and 1970s. It would have consisted of a three kilometer, or 1.864 mile, geodesic dome that would maintain a consistent weather and somehow reduce air pollution, according to 6sqft.

What is a geodesic dome? Think of it like Spaceship Earth, otherwise known as the Epcot Ball in Orlando Florida, except the spaceship is a sphere, where as the dome would have a semi-spherical.

The dome would have covered Midtown from the East River to the Hudson River, and from 21st Street to 64th Street.

It would have regulated temperature within the dome, reducing the cost of heating or cooling buildings. Fuller suggested that the project would have cut costs of things such as snow removal, offsetting the initial expense to build.

However, we're pretty happy this dome didn't see the light of day, as Fuller suggested that home prices and rents would have been much higher under the dome due to the regulated weather and temperatures. 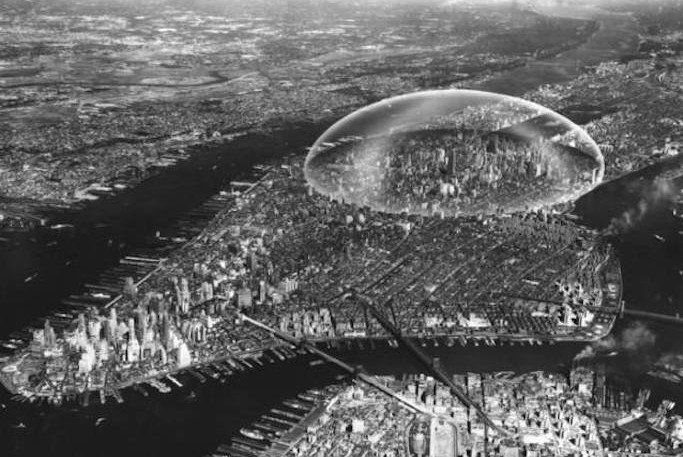 Via Estate of R. Buckminster Fuller

We can only imagine what the price of apartments in Midtown would cost had this plan succeeded.

If you really, really want to live in a bubble, you might want to move to Dubai, as a similar temperature-controlled dome concept is planned to cover the "Mall of the World."

For now, we'll just keep our city the way it is, thank you very much.

Check out This Interactive Map of Every Affordable Housing Lottery in NYC Right Now.