Despite Drop in Crime, Metal Detectors Are Still a Thing in NYC Schools

There are some students in New York City who have to unravel their scarves, take off their hats and gloves in the freezing cold before they can enter their schools.

They also have to send their backpacks through an x-ray machine. Sometimes students have to wait for as long as an hour before they can even get inside.

This is the reality for more than 100,000 middle and high school students at more than 236 schools in NYC, according to WNYC.

If a student's studies require metal attire, they have to be checked separately by a hand wand. Does the hold up make students late for class? Absolutely.

If the process for thousands of NYC students sounds a whole lot like the process of boarding a commercial air flight, it's because the two bear more than a passing similarity. Students have to remove belts and shoes to get into the school they attend every day.

Propublica conducted a survey that yielded horrible, yet not altogether surprising results: The majority of students screened at the doors of their schools are students of color.

How bad is the trend of metal detectors slanted toward children of color? Black and Hispanic students in high school are nearly three times more likely to walk through a metal detector than white students.

The history behind the detectors is simple. The city installed them 21 years ago in more than 80 schools after two students were shot to death at Thomas Jefferson High School in East New York in February of 1992.

When then-Mayor David Dinkins had been scheduled to address the Jefferson students after the shooting, gunfire erupted in the school that morning.

With rapid speed, the Board of Education approved a $20-million plan to install metal detectors, x-rays, and electromagnetic doors at an additional 40 schools, expanding a program that initially involved only 16 schools in the most crime-ridden areas of the city.

Obviously, many have raised the concern that the detectors are producing more negative effects than positive. Obviously, they create a culture of fear and demonstrate distrust in the students. 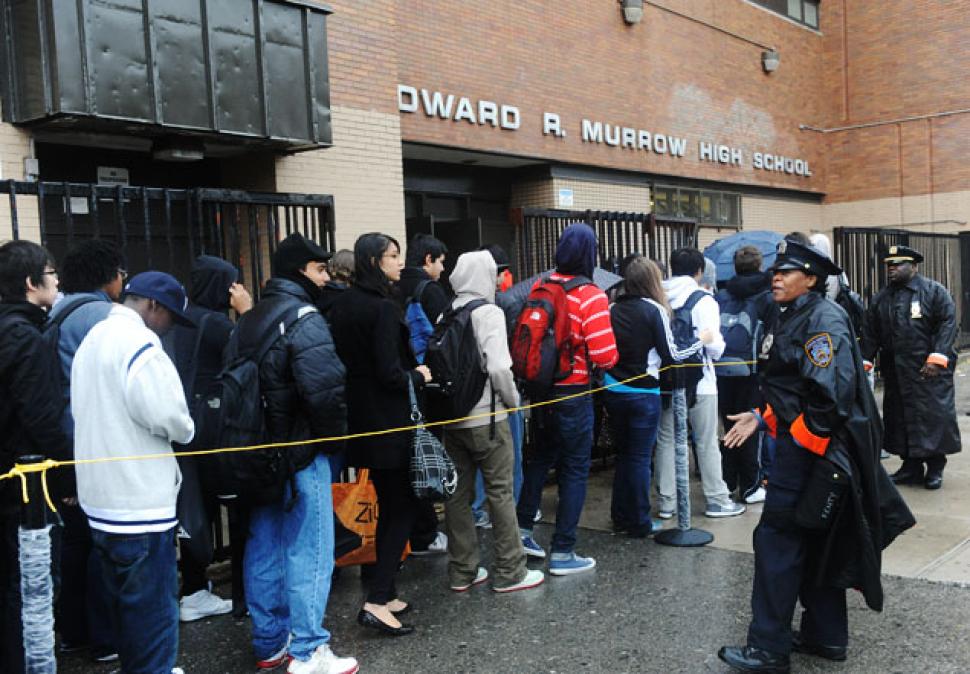 Bloomberg is working to get the scanners removed from the front of her school.

When the metal detectors were installed in the early 1990s, crime rates were much higher. Ever since, crime rates in public schools have taken a 48% decline in the last decade. In the last year alone, crime in schools has dropped 11%.

Even though crime has dropped, the detectors have stayed put. Only two have been removed since 1998.

The sensors stayed even when schools shut down and completely new schools were opened in the same building. Their need was never reevaluated.

Mayor de Blasio wrote a report last July called "Security With Dignity" that recommended the city remove some metal detectors. The NYPD agreed to examine the detectors, but never provided a timeline.

During the first two months of this school year, approximately three million scans were conducted, which yielded the discovery of 126 possible weapons.

"The answer is not the machines, the answer's the relationships. The answer's giving kids options in the school," said William Jusino, principal of Progress High School who had its detectors removed in 2006.

Let's do better NYC. Let's interrogate our policies, and question what we're sacrificing in the educational climate when the default attitude toward students in schools is distrust.

Check out This Luxury High-Rise, Complete with a 'Poor Door,' Just Opened on the UWS.